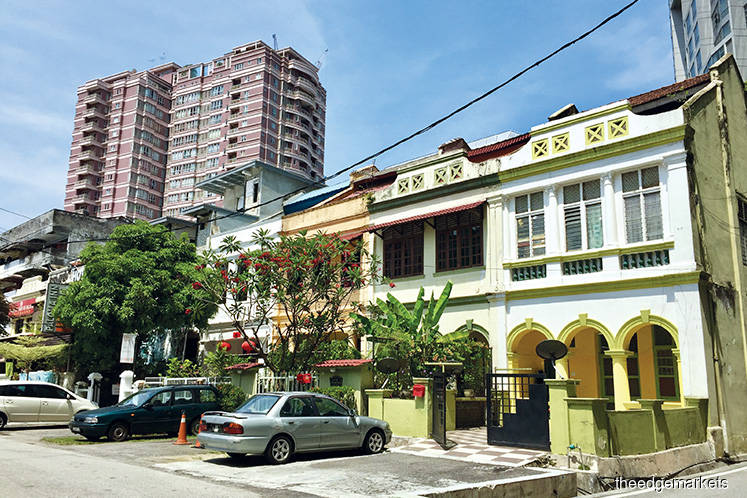 The quiet neighbourhood of Jalan Sin Chew Kee — in the heart of downtown Kuala Lumpur tucked somewhere between Bukit Bintang and Chinatown — is somewhat sequestered from the heavy traffic of Jalan Pudu. Concealed behind sleek towers, the quaint quarter is lined with three rows of 2-storey colonial terraced houses that are said to date back to the 1920s and ageing walk-up apartments that were built in the 1970s.

In recent years, the area, though still mostly residential, is gaining more visitors thanks to the eateries, cafés and boutique hotels operating in the colonial houses that have been converted for commercial use.

Mike Fong of Sarang Vacation Homes, who grew up in the area, says the place was pretty quiet for many years. “Being a small community, almost everybody knows one another. We are only now starting to see some changes, with bars and budget hotels creeping in. I believe our bed and breakfast was the first in the area.”

Together with his wife Christina, Fong started his homestay business about 20 years ago in four colonial houses in Jalan Sin Chew Kee and Jalan Galloway.

While some of the units have been renovated and even extended upwards, most of the houses have kept their 1920s architecture untouched, so visitors feel like they have entered a time warp. “We have kept the interior of the houses as they were so our guests can experience the old-style, pre-war houses,” says Fong.

He tells us that the prison wardens’ quarters, on the slope across the street have been replaced by the current IPK police headquarters. “[The wardens] lived there and walked across the road to Pudu Jail, where the [Bukit Bintang City Centre] is today. In those days we used to get our groceries from Chinatown and from the Pudu market. There were also people coming around on their bicycles to sell stuff.”

The rows of houses were rarely rented out in the early days, but over time, the original owners passed on  and their children moved out or went abroad, some of the homes were subsequently rented out for below RM1,000.

“In the 1960s till the 1980s, a house would [accommodate] up to 15 people,” says Fong. “Today, one  can be rented out for around RM8,000, depending on its condition and whether it has been renovated, which would fetch a higher rent.”

Regardless, rents of the colonial houses in the area do vary as some of the units are still being rented out to long-term tenants that have been living in the area for many years. “Existing leases signed years ago would be much lower as the owners have not increased rents very much over the years,” says Fong.

For better or worse, the changing times have also brought about a disparate society in the area, with migrant workers living in the older flats and apartments while expatriates occupy serviced residences like the Swiss Garden Residences next door.

“The ambience and environment have changed so much. We get a lot of foreigners living here now. In those days, we used to be able to play outside and no one would bother us. These days, we get a lot of snatch thieves preying on tourists,” he laments.

The colonial houses, Fong estimates, used to cost RM30,000 and were rarely put on the market. “Even though most of the owners are not living in the houses, they are reluctant to sell them. One or two were transacted recently.”

Today, the asking prices for the colonial houses range from RM2.4 million to RM2.6 million.

According to JPPH data from Henry Butcher, three 1,760 sq ft units in Jalan Sin Chew Kee were transacted in November of last year at RM2 million each. In September 2016, a 1,600 sq ft unit on the same stretch was sold at RM1.6 million and in December 2014, a 1,920 sq ft unit in Jalan Galloway was transacted for RM2 million.

Henry Butcher chief operating officer Tang Chee Meng thinks the area will do well once it is rejuvenated. “The neighbourhood has seen a lot of changes over the years and has been gentrified with the addition of modern cafés and eateries as well as boutique hotels and serviced apartments. The area holds great promise because of its location right smack in the city centre and its proximity to Bukit Bintang as well as Chinatown. The MRT station will in future also make the area more accessible.”

Fong is glad no one has attempted to do an en bloc purchase of the quaint quarter. “I am very happy that nobody has done so because they would probably tear it all down, build another high-rise and we would lose another part of Kuala Lumpur to modernisation. I would like to keep the houses as they are because you don’t find this anymore,” says Mike. His overseas guests, he says, enjoy living in the area. “You can get five-star hotels anywhere in the world, but not this. Although it is beyond our control and I have nothing against change, this place is precious and we would like to keep it like that.”