Rex Industry Bhd
Amid a subdued market, Rex Industry saw its share price jump as much as 7.2% to a high of RM1.18 of Thursday before paring back gains to close at RM1.16. It should be noted though that the stock is thinly traded. Thursday’s volume stood at just 52,000 shares and there are days in the past week where it was not traded at all.

Operationally, Rex has been slowly turning around — returning to positive territory in 2012, with a modest RM200,000 profit from a loss of RM4 million in 2010. The improvement has continued this year. Cumulative profits for 9M2014 totalled RM2.57 million, exceeding 2013’s full- year net profit of RM2.1 million.

Rex is principally involved in manufacturing HALAL canned food, frozen food and beverages under the brand name ‘Rex’. One of the smaller food manufacturers with a market capitalisation of RM62 million, Rex sells to both the domestic and foreign markets, in roughly equal proportions.

The stock is trading at only 0.47 times book value but it is priced at a high 51 times trailing 12-month earnings, well above the F&B industry average P/E of about 20 times.

The company has relatively high fixed costs (including depreciation) and thin operating margins — less than 5% in the past 3 years, which could leave it vulnerable to say, a demand slowdown or rapid cost inflation. Of note, inventories totalled RM59 million at end-2013 — roughly 4.5 months worth of sales and larger than its fixed assets of RM58 million.

The company has not paid any dividend since 2009. Positively, current gearing is low at only 8%. Management aims to drive growth by diversifying into the new products such as package drinks and also to expand its international market footprint. 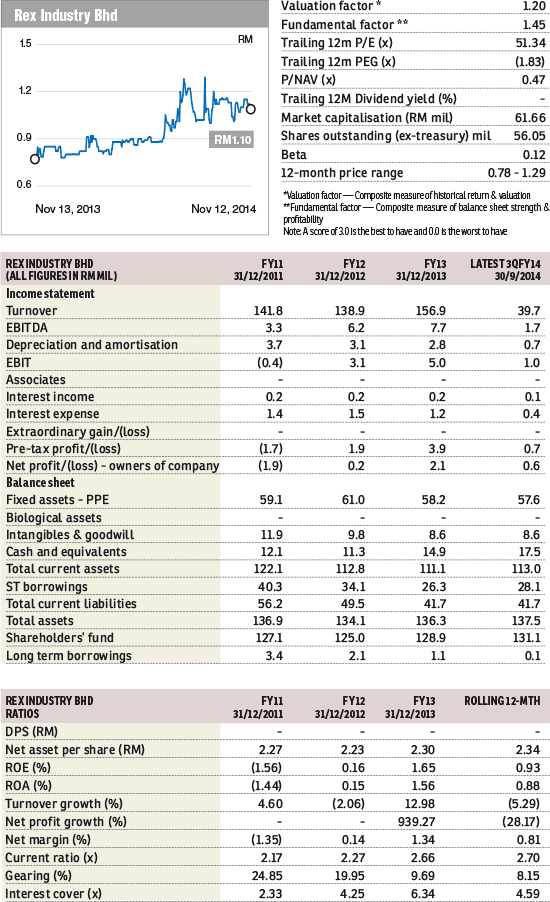