Privasia Technology Bhd
Privasia was picked up by our momentum algorithm for the second time in two months, after the counter rose 14.8% to 15.5 sen over the last two days. Although the stock retraced some 3% to 15 sen yesterday, trading volume doubled from 8 million on Monday to over 20 million shares.

It is unclear what triggered the sharp increase in investor interest, although IT-related companies, especially those offering GST-related services, have seen a pick-up in interest.

Last month, Privasia announced that it has secured RM31.5 million worth of contracts from the Department of Survey and Kuantan port, putting its order book at RM159.3 mil.

The company’s latest third quarter results as of Sept 2014 saw the year-to-date group revenue strengthening by 4.5% to RM45.3million, mainly contributed by healthy growth in the Outsourcing and Consulting (OSD) and Satellite based network services (SAT) segments. However, net profit fell by 15% to RM3.3 million caused by lower margins from certain projects.

The stock currently trades at 0.98 times book, with a trailing 12-month P/E multiple of 17 times. The Edge Research rates this company a 1.4 out of 3 on fundamentals and 1.2 out of 3 in terms of valuation attractiveness. 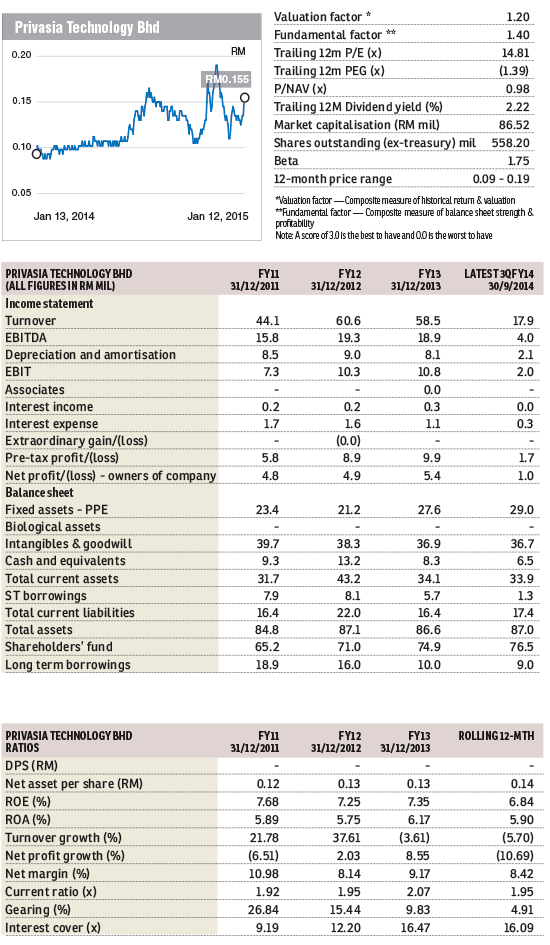