Federal Furniture Holdings (M) Bhd (+ve)
Shares for Federal Furniture (FFHB) (Fundamental: 1/3, Valuation: 1.1/3) have been rising steadily this year, likely due to positive sentiment for the furniture industry as a whole.

The company is primarily involved in manufacturing furniture as well as undertaking interior fit-out (IFO) projects, including for Istana Alam Shah, prime minister’s residence, and corporate offices for Microsoft and Shell.

Between 2010 and 2014, FFHB’s revenue fluctuated within the RM40-80 million band, while pre-tax profit ranged from RM1 million to RM5.1 million. Last year, revenue grew 20.7% to RM66.8 million, underpinned by higher exports to Starbucks Japan and Korea and higher progress billings from the IFO division, but pre-tax profit declined 27.6% to RM3.2 million due to lower margins.

On March 10, 2015, FFHB proposed to purchase a piece of land from Maya Focus Sdn Bhd for RM4 million. The land will be used as a yard and for warehousing. 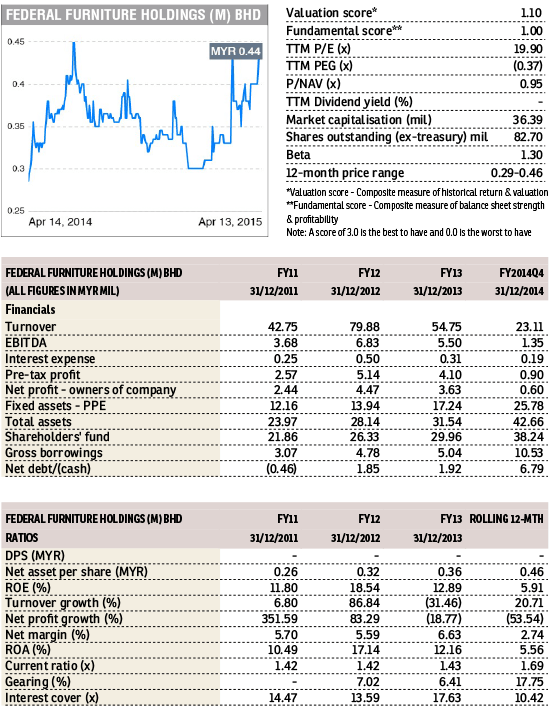