Fund management is the primary earnings driver, contributing 81.3% of revenue and 84.5% of pre-tax profit for 9MFYJan15.

After the sale of its investment banking arm it was classified as a PN17 company, and the resulting negative perception affected its business growth. With its PN17 status uplifted in May 2014, ECM now targets to grow its assets under management (AUM) aggressively by establishing its own agency force with a stronger focus on high-net-worth individuals.

Total AUM for the fund management industry grew 11.3% y-y to RM633.3 billion as at end-September 2014. The industry, however, will see more competition from foreign players following liberalisation of the unit trust industry last year.

ECM has a strong debt-free balance sheet. As at end-October 2014, cash and marketable securities stood at RM104.5 million and RM205.4 million, respectively.

ROE, however, was low at 5.9%, but should improve with its strategy to expand fund size as most of its operating costs are fixed in nature. ECM was reported to have a relatively small AUM of RM2.5 billion as of May 2014. Case in point, net profit for 9MFY15 more than doubled to RM26.1 million y-y due, primarily, to the 120.4% increase in revenue from fund management.

With market capitalisation of RM266.5 million, the stock is trading 42% below its book value of RM1.70 and P/E of 9.64x. ECM has recently proposed to buy back up to 10% of its outstanding shares and will seek shareholder approval at an extraordinary general meeting on 9 February 2015. 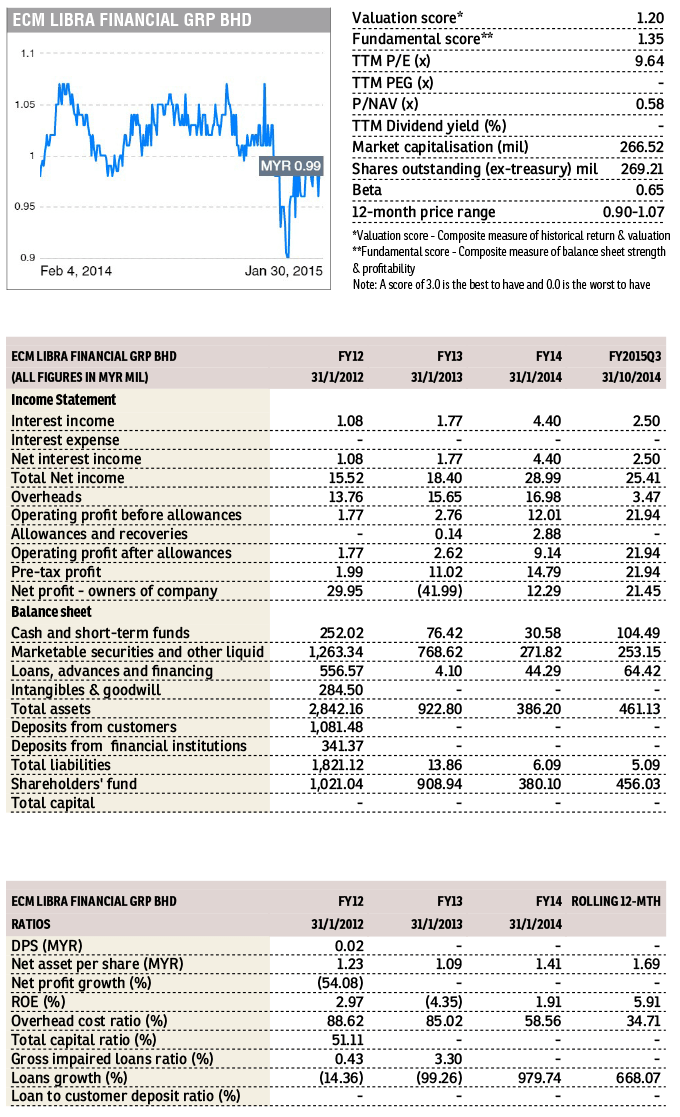