BTM Resources has been highlighted as the first “Red flag” stock by The Edge Market’s analytics system. “Red Flag” stocks are picked up when they have weak fundamentals coupled with an increase in trading momentum. This suggests investors should exercise extra caution.

BTM is a timber moulding player. It has a weak financial track record with losses for the past ten years amid declining revenue.

Financials aside, what is also interesting is the timing of the rally — which coincided with its newly listed securities from a fund-raising exercise. One wonders if some market players could be “pumping” the stock to possibly “dump” the shares and the warrants?

The company had just completed a fundraising issue involving a 2-for-1 rights issue priced at 20 sen per share, together with free warrants on the basis of 4 free warrants for every 10 rights shares subscribed. The exercise saw 81.5 million new shares and 32.6 million warrants issued. Despite its financial track record, BTM saw a surprisingly high oversubscription rate of 21% for its rights shares.

The shares and warrants were listed on 29 October 2014, coinciding with the start of the rally. The rights issue was priced at 20 sen, with the warrants’ exercise price also set at 20 sen.

Incidentally, BTM’s shares rose 5% to hit the 20 sen mark on Wednesday and surged 30% to 26 sen on Thursday on hefty volume of 64.7 million shares.

With the stock price surge, the rights shares and warrants are now both “in the money”. The free warrants fetched 17 sen on Thursday, with 15.4 million warrants traded.

There is no fundamental reason for this rally as far as we can see. 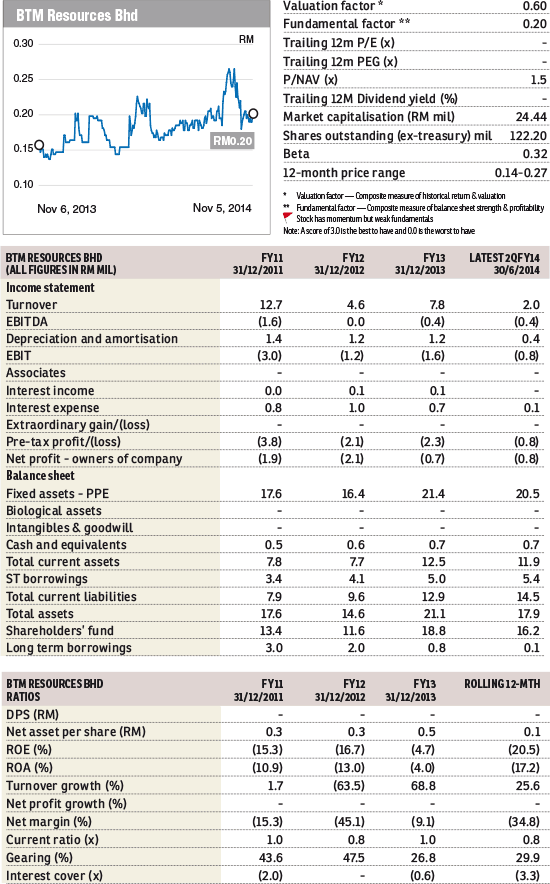