ASDION Bhd is an MSC-status company that provides integrated business and operations solutions, particularly to the hospitality, recreational, supply chain logistic and data services businesses. The company has operations in Singapore, Shanghai, Beijing, Thailand and Brunei.

The major shareholder of Asdion is Tey Por Ye, who has stakes in at least five listed companies such as Protasco Bhd and Nexgram Holdings Bhd. He holds 22.0% of the total issued shares. Tey was recently embroiled in a boardroom tussle at Protasco.

Over the past four weeks, Asdion’s price has surged 17.5% to close at 47 sen. It is unclear what is driving the share price up, although IT and software stocks have seen active trading in recent months, riding on the implementation of the Goods and Services Tax (GST) next April. The GST compliant software market is potentially worth RM1.7 billion, but it is unclear if Asdion will benefit from it.

The company has been in the red since FY December 2009, with erratic revenue, ending in losses of about RM3.1 million for FY March 2014 (change in Financial Year). Annual revenue has been very small, ranging between just RM4.4 million and RM9.4 million in the same period.

Its balance sheet has been strengthened following the completion of a private placement of 29.2 million shares at RM0.476 per share. As such, the company had net cash of RM11.4 million in 2QFY2015 or 10 sen share, equivalent to 21.2% of its current share price.

Asdion is looking to diversify its business into property investment and development, and is reportedly looking to acquire land in Johor using the proceeds from the corporate exercise. It is unclear if a diversification into the cyclical property sector will boost the company’s future earnings. 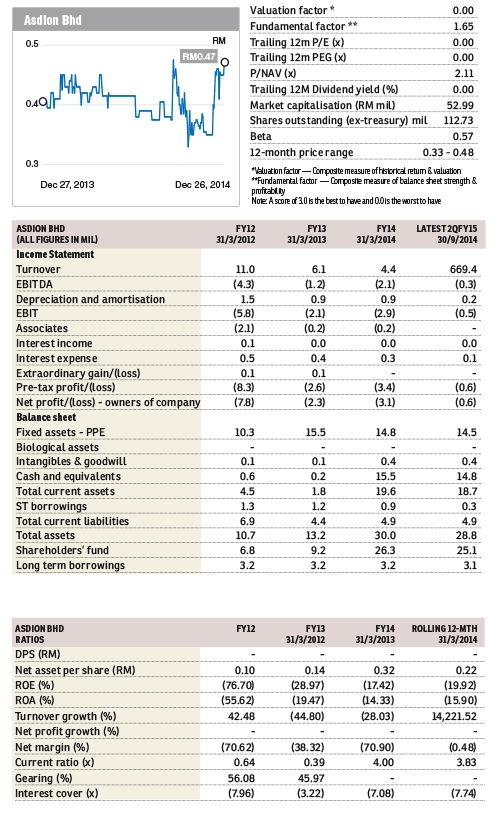