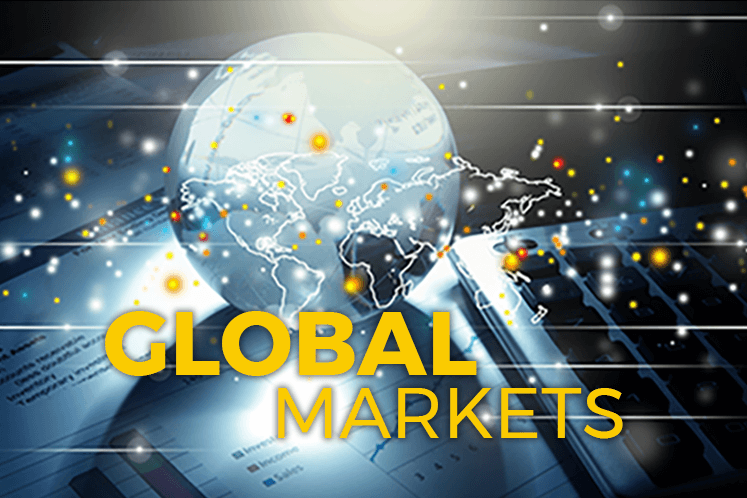 SYDNEY (April 6): Stocks jumped on Monday as investors were encouraged by a slowdown in coronavirus-related deaths and new cases, while oil prices skidded after Saudi-Russian negotiations to cut output were delayed, keeping oversupply concerns alive.

Equity investors took solace as the death toll from the coronavirus slowed across major European nations including France and Italy.

US stock futures rose 4% in Asian hours, trading close to its upper limit after US President Donald Trump expressed hope the country was seeing a "levelling off" of the coronavirus crisis.

London's FTSE was up 3.2% in early trading, while Germany's DAX index was 4% higher.

"The stabilisation we are seeing in the market today is welcomed but it is something really fragile," said Frank Benzimra, head of Asia equity strategy at Societe Generale.

In commodity markets, Brent crude fell as much as US$4 after Saudi Arabia and Russia postponed their meeting, initially scheduled for Monday, to Thursday even as the virus pandemic pummels demand.

"With a very light calendar globally today, there is enough momentum to keep the equity rally running through the course of the day and also into European time," said Jeffrey Halley, Senior Market Analyst, Asia Pacific, OANDA.

"All bets are off after that although I could see a couple of days of positive sentiment ahead, especially if those mortality rates keep falling."

That sent MSCI's broadest index of Asian shares outside of Japan up almost 2.03%, on track for its best performance in over a week.

Markets in mainland China were closed for a public holiday.

Worryingly, the number of new coronavirus cases jumped in China on Sunday while the number of asymptomatic cases surged too as Beijing continued to struggle to extinguish the outbreak despite drastic containment efforts.

"Focus in markets will now turn to the path out of lockdown and to what extent containment measures can be lifted without risking a second wave of infections," National Australia Bank analyst Tapas Strickland wrote in a note.

Strickland, however, noted many in China were still subject to social distancing and isolation restrictions to prevent a resurgence in infections.

The pandemic has claimed more than 68,000 lives and infected over a million people globally. The United States has the highest number of reported cases, at over 300,000.

Concerns about heavy damage to the global economy have pushed investors into the perceived safety of government bonds where yields are at or near all-time lows.

"One of the major concerns of markets at the moment is the extent and the soundness of the recovery in production that we are seeing in China and other Asian countries," SocGen's Benzimra added.