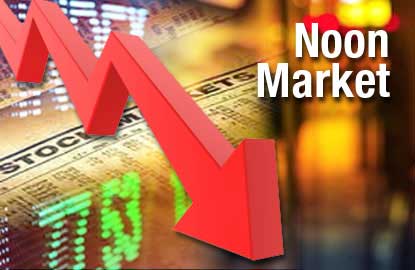 The result is a mixed morning trading session in Singapore.

Ezra rose 1.6% to 12.4 cents on 79.3 million shares traded after Japan's Chiyoda agreed to buy a 50% equity stake in Ezra's main subsea services division. Ezra will hive off the division, EMAS AMC, into a separate firm and rename it EMAS Chiyoda Subsea. Chiyoda will pay Ezra US$150 million ($210 million) for the stake and invest an additional US$30 million in the new joint-venture firm.

AusGroup dropped over 3% to 11.1 cents with 1.6 million shares traded. The integrated service provider to the energy, industrial and mining sectors, reported that its 4Q earnings plunged 88.4% from a year ago to A$261,000 ($261,000) due to an impairment arising from decreased certainty in capital expenditure in the energy sector.

KLW Holdings rose 10% to 1.1 cents with 900,000 shares traded, before requesting for a trading halt on its shares pending the release of announcements by the provider of quality engineered doors.

Companies that went ex-dividend on Monday include Captii and First Resources.