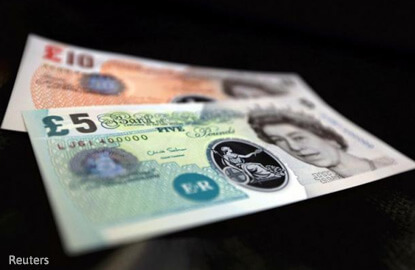 LONDON (Jan 16): Sterling skidded to its lowest levels — bar a "flash crash" in October — in 32 years on Monday, hit by fears that Prime Minister Theresa May will say on Tuesday that Britain is set for a "hard" Brexit out of the EU and its single market.

Sterling fell as much as 1.5% against the US dollar and over 2% against the yen. That shifted the spotlight away from the greenback, which has come under pressure in recent days as investors ponder US President-elect Donald Trump's likely economic policies after he takes office on Friday.

The pound plunged to as low as US$1.1983 in early trade in Asia, depths not seen since a bout of thin liquidity triggered a "flash crash" on Oct 7 that wiped as much as 10% off the pound in a matter of minutes.

Dealers said the market was reacting to various media reports over the weekend, including one in The Sunday Times that said May will signal plans for a "hard" Brexit in her speech on Tuesday, saying she's willing to quit the European Union's single market to regain control of Britain's borders.

Investors have been worried such a decisive break from the single market would hurt British exports and drive foreign investment out of the country.

"Broadly, the market has not has sterling and Brexit and Theresa May in its mind for the last two months — it's been driven by Trump and Treasuries, and more the US drivers. And now for two weeks in a row we've had news on May ... really bring that to the forefront again."

Cochinos said Britain's hefty current account and budget deficits meant it was heavily dependent on foreign capital, and that the more uncertainty investors felt over Britain's place in Europe, the more that investment would dry up.

May has said she will trigger Article 50 — starting the formal withdrawal from the EU — by the end of March. But so far, she has revealed few details about what kind of deal she will seek, frustrating some investors, businesses and lawmakers.

The Japanese currency gained broadly as a risk-off mood dominated, hitting a six-week high of 113.61 yen to the US dollar.

"The risk-averse sentiment stemming from 'hard Brexit' (worries) is pushing down the dollar/yen," Masafumi Yamamoto, chief forex strategist at Mizuho Securities in Tokyo.

"But so far, I think the correction from the dollar/yen's high in December, and concerns about stronger protectionism under the new US presidency, have been the dominant theme."

Trump revealed few policy clues at his first press conference last week since his November election victory. The US dollar rose after the election on expectations that his administration would embark on stimulus to boost growth and inflation, prompting the US Federal Reserve to adopt a faster pace of interest rate hikes.

But Trump's protectionist stance has also added to some investors' risk aversion, as he has threatened to impose retaliatory tariffs on China, build a wall along the Mexican border and tear up the North American Free Trade Agreement (NAFTA).