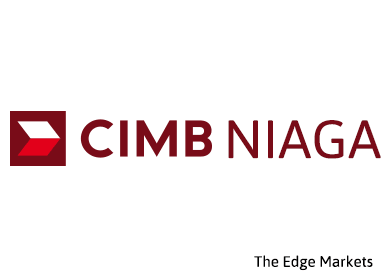 CIMB Group Holdings Bhd
(April 23, RM6.15)
Maintain sell with an unchanged target price (TP) of RM5.50: PT Bank CIMB Niaga Tbk saw a 92.4% plunge in the first quarter of financial year 2015 ended March (1QFY15) net profit to 83 billion rupiah (RM23.21 million) due to a spike in provisions, although anticipated. We believe that headwinds may start ebbing in the second half (2HFY15), but no meaningful rerating catalysts are in sight. We maintain our “sell” rating on CIMB Group, with an unchanged TP of RM5.50.

On a quarter-on-quarter (q-o-q) basis, the extent of provisions, however, decreased by 26%, resulting in a q-o-q rebound in net profit (up 80%). The quarter of heavy provisioning in 1QFY15 (from the coal and related sectors) had again almost wiped out the entire pre-provision operating profit, similar to 4QFY14, but had been well-anticipated as the management has cautioned this since 3QFY14. For 1QFY15, weaker non-interest income was 29.4% lower y-o-y (impacted by weaker treasury market and the bancassurance fee cap) while net interest income edged up 10.8% y-o-y, on the back of an increase of 9.6% y-o-y loan growth and steady net interest margin at 5.22%.

Operationally, we expect a more steady outlook for CIMB Niaga from 2HFY15, underpinned by a low-teens loan growth rate, driven by the consumer banking division and selective focus on high quality commercial/corporate customers (in anticipation of increased government infrastructure spending). Meanwhile, we remain cautious about CIMB Niaga’s asset quality, as the management has also indicated that credit cost will remain elevated in the near term given its high standards of provisioning.

We reiterate our “sell” rating on CIMB Group at an unchanged TP of RM5.50, based on an implied price-to-book value (P/BV) target of 1.0 times. At this juncture, we still do not foresee strong rerating catalyst for CIMB Group — the outlook in 2015 does not appear compelling for either the financing or capital markets.

Though impaired loan allowances are expected to start easing from 2HFY15 for CIMB Group, we remain cautious about the asset quality front and keep our credit cost assumptions at 48 basis points (bps) for 2015E (estimates) and 27 to 30bps for FY15 to FY16E. Key upside risks include a turnaround in global economy and the capital markets as well as credit recoveries. — Affin Hwang Capital, April 23 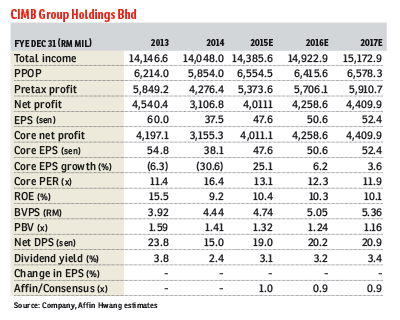