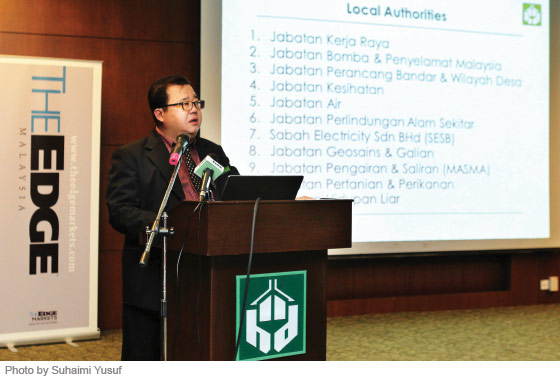 THE Sabah Housing and Real Estate Developers Association (Shareda) believes that the best is yet to come in terms of property investment opportunities in the second largest state in Malaysia. With a land area of 73,631 sq m, more than half of Peninsular Malaysia’s 131,598 sq m, the state’s property development sector has much to offer.

This was shared during The Edge Malaysia Property Excellence Awards 2014 Networking Retreat held from Oct 17 to 19. Over 60 delegates — comprising property developers who had won at the awards, judges and industry experts such as real estate agents and consultants from Peninsular Malaysia — got to mingle with their Sabahan counterparts and discover what the Land Below the Wind has to offer. The retreat was organised by the Sabah government and facilitated by The Edge Communications Sdn Bhd.

At an afternoon talk on Oct 17, Shareda president Datuk Francis Goh (pix) spoke about the property development practice in Sabah.

CL999 land is considered freehold land but is mainly allocated as agricultural real estate. CL99 land is similar to leasehold parcels on the peninsula. TL99 land is normally located in the city centre.

NT land is subject to the Sabah Land Ordinances, under which land dealings must be carried out between natives. FR land refers to land that had not been accurately defined or demarcated during that British era and has to be resurveyed in order to be upgraded to NT land.

Goh spoke about the issues regarding land conversion and how it takes time. He also highlighted that the process to get a developer’s licence is long and can take about 30 months. The process includes getting approvals for development plans, building plans and conversion of land and paying of premiums before the developer can apply to the Housing Controller for the licence.

Goh highlighted that the 30% bumiputera quota is not about conserving Malay land but rather, it is a new economic policy to encourage bumiputera involvement in property investment. An advantage of property development in Sabah, he said, is that there is no quota for affordable homes or low-cost houses.

He added that for developments that are on a slope with more than a 25% gradient, an environmental impact assessment (EIS) report has to be submitted to the High Slope Committee of the Dewan Bandaraya Kota Kinabalu (DBKK). As for projects on the seafront, a shoreline management plan requires a setback of 60m from the sea.

With these policies in place, the Sabah government understands the need to be mindful of how development of the state is to be done. As such, several draft local plans have been put together, including one for the city of Kota Kinabalu. The drafts are being gazetted.

For those who want to know more about what the government wishes to do, draft local plans can be purchased, said Goh. Also, he advised that developers should check with the relevant town planning department before purchasing land in Sabah. As these plans have not been gazetted, land conversions can still be done easily.

Until the local draft plans have been approved, all matters regarding property development is governed by a government body called the Central Board (CB). Its roles include executing government policies, conveying state cabinet decisions, and looking into social, traffic and economy impacts. The CB also approves rezoning applications. Goh said the CB has come up with a density ratio for residential development, which allows 100 to 150 units per acre and a height restriction of 33 storeys.

Goh said some of the problems the industry is facing include the lengthy process of the development order application, the shortage of labour that causes developers to incur an 8% penalty for late delivery and the high capital contribution charge by Sabah Electricity Sdn Bhd. Moreover, building materials are 20% to 30% higher due to the cabotage policy, which requires cargo ships to stop in Port Klang first before heading to Sabah.

Additionally, the lack of good public transport systems, infrastructure and road networking systems adds to the cost of development.

However, such challenges have to be dealt with, said Goh. He announced that with demand for housing on the rise, Shareda’s members have committed to build 10,000 affordable homes, including terraced houses, semi-detached homes and apartments. To facilitate this venture, the association has formed a company called Shareda Bhd, with a paid-up capital of RM30 million, which were raised by its 190 members. Its members make up 95% of developers in Sabah. This year, it will launch 6,000 affordable homes.

He added that Sabah needs more hotels and resorts and encouraged developers from the peninsula to invest in and develop leisure properties.

Shareda compiled a comprehensive annual report in 2013 to provide detailed research analysis and information on the property market. According to Goh, the report says the property market is showing steady growth. Last year, Shareda members launched 15,125 units with a gross development value (GDV) of RM7.56 billion.

Sabah’s residential price appreciation has been consistent at 8% per annum, according to the report. The cumulative supply of residential houses in Kota Kinabalu has also been quite consistent, according to the National Property Information Centre’s (Napic) Property Market Report 2012 to 2013. However, Goh refutes the Napic report of a sharp increase in house prices in Sabah to just above 22%.

“This sharp increase is not correct as Napic is referring to the hybrid projects, which are located along the coastal highway of Kota Kinabalu and have announced prices of RM650 psf to RM1,200 psf,” Goh said. “There is no more land along this coastal highway, so it is not correct to refer to these prices and claim that property prices are too high. Generally, a medium-end condominium should be RM400 to RM500 psf.”

Goh noted that the decrease in property launches was also due to the hijacking incidents in the east coast. Managing director of The Edge Communications Au Foong Yee asked Goh about the security challenges.

He replied that the incidents are only happening in the eastern parts of Sabah and that the federal government is looking into the situation.

Although the MH370 and MH17 tragedies have dealt a big blow to tourism in the country, Goh believes that in time, people will return to Sabah. The Sabah Hotel Association says there are signs of tourists, especially those from China, returning to the state.

Additionally, the delay in the approval of development plans, which causes the developer to sit on their land while waiting for their developer’s licence, was also a factor in the drop in launches. Another factor was the high loan rejection rate resulting from tightening of lending policies by Bank Negara Malaysia. The implementation of the Goods and Services Tax will cause much uncertainty as well.

“Many developers are adopting a wait-and-see attitude and are holding off on their property launches,” said Goh.

The market sentiment overall, however, is still positive. Goh revealed that there will be development of affordable homes with a total estimated GDV of RM7.1 billion next year. 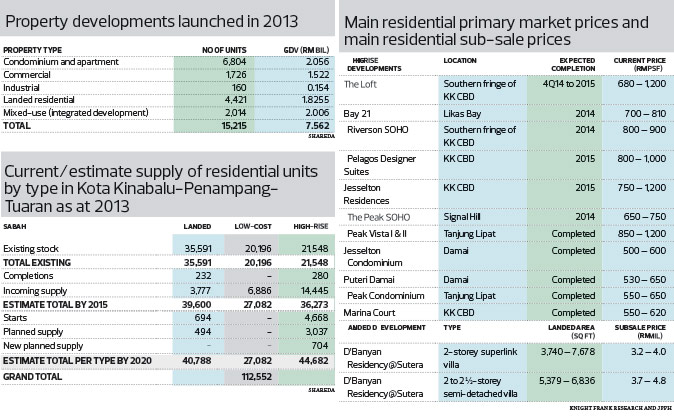