The State of the Nation: Why Malaysia can cope without GST Lim: We are people-oriented but don’t forget we are also growth-oriented and jobs-oriented, so [critics] only got the first part right. Photo by Patrick Goh/The Edge 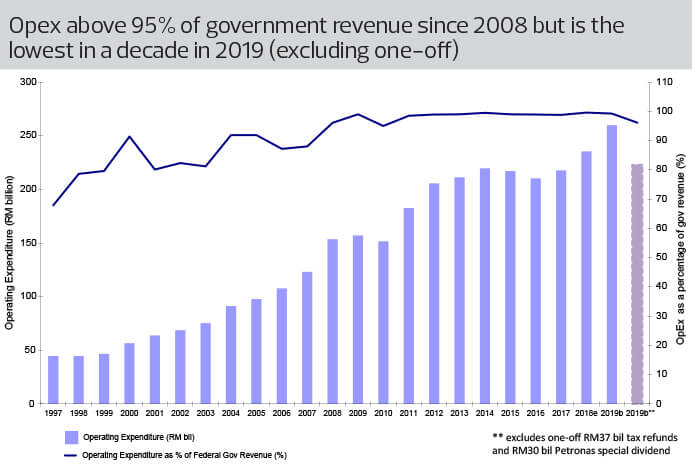 FINANCE Minister Lim Guan Eng missed his usual Deepavali festive rounds this year as duty came before Malaysia’s good food. Instead of celebrating with friends and family, he was in Hong Kong and Singapore meeting investors and credit analysts to spell out the state of Malaysia’s finances after tabling Budget 2019 with higher fiscal deficit figures on Nov 2.

Whether or not one agrees with Moody’s Investor Service’s decision to change the rating outlook for Petronas to “negative” from “stable” on Nov 8, Lim reckons that the time spent engaging with foreign investors and sovereign rating agencies was not in vain.

“Petronas can definitely afford it … We’ve explained what we are doing and think that is why so far there is no [rating] downgrade [for Malaysia] … Shouldn’t we see that as a positive?” Lim asks.

“I can’t say specifically what was discussed [with the rating agencies] but I can say it was more positive at the end than in the beginning. We made clear certain issues that they were not aware of.”

Compared with the “we’ve got to be stingy” stance taken during his first interview as finance minister five months ago, Lim says the Pakatan Harapan government now has a much clearer picture of the state of the nation’s finances, having made sense of the red files that were previously kept secret, even from the auditor-general.

“I don’t think there are any more [red files] … nothing on the scale of 1MDB and GST refunds, and we are going to make that doubly sure when we adopt the accrual basis of accounting in three years. Hopefully by 2022, we can be back on track. By back on track, I don’t mean we’ve paid back our RM1 trillion debt but we would have got our fiscal deficit down to healthier levels, the payment and servicing of debt would also be healthy and borrowings would be done on best value and on a need-only basis without hanky-panky,” he explains, recounting Malaysia’s commitment to bring down its fiscal deficit from 3.7% in 2018 to 3.4% in 2019, 3% in 2020 and 2.8% in 2021.

“When we first came in, we only had RM450 million left in the account and the monthly pensions and salaries were RM8 billion… so far we’ve succeeded in increasing the amount we have to spend to more than RM3.2 billion.”

More importantly, the government is more prepared to spend smartly to stimulate the economy and is looking at ways to reduce the cost of doing business rather than being fixated on taxing people and businesses.

“When our economy grows, there will be more income [for the government] to spend on the people. That’s why we need the economy to grow … if we can grow more than 5%, it would be even better,” Lim says, noting how Budget 2019 has allocated RM2 billion to provide up to 70% loan guarantees to small and medium enterprises (SMEs) to invest in automation and modernisation to embrace the Fourth Industrial Revolution (Industry 4.0).

“Yes, we are people-oriented but don’t forget we are also growth-oriented and jobs-oriented, so [critics] only got the first part right. If the economy doesn’t grow, how will we fund the necessary social assistance?”

Other incentives, such as the RM2 billion credit line for export financing and RM3 billion Industry Digitalisation Transformation Fund to accelerate technology adoption, are also hoped to help boost SME productivity and export contribution. SMEs contributed 37.1% to Malaysia’s gross domestic product (GDP) in 2017, up from 36.6% in 2016. This is targeted to reach 41% by 2020 with 23% export contribution. Last year, SMEs contributed 17.3% to total exports (18.6% in 2016) and employed 66% of the total labour force.

“We showed our sincerity by reducing the corporate income tax for SMEs from 18% to 17%,” Lim points out, referring to the Budget 2019 cheer for SMEs with less than RM2.5 million in paid-up capital and those with taxable income of up to RM500,000.

“When our financial situation improves, [we can cut corporate tax] and you can say it is unlikely that there will be any increase in corporate tax for the foreseeable future … the trend globally is downwards,” he says, adding that it is not a priority for Malaysia to introduce the capital gains tax and inheritance tax at this juncture.

Need money to pay down debt but not desperate

“GST revenue was not RM44 billion [in 2017]. Without the [owed tax] refunds, it was about RM35 billion to RM36 billion a year [on average]. If we take into account the other gaps in revenue [which overstated previous tax receipts], the difference is about RM11 billion plus. Of this amount, half can be made up by cutting down expenditure. The other half would be savings from open tenders … we might not be able to save 45% like in Penang but 10% savings of RM55 billion development expenditure is RM5.5 billion, so that makes up for the shortfall. The special RM30 billion dividend from Petronas is a one-off to repay the [RM37 billion] owed tax refund that is not going to happen again,” he says.

The government will also leverage public-private partnerships and private investments to help drive economic growth, Lim says, noting that Malaysia will “privatise both the risks and profits rather than privatising the profits and socialising the losses”, referring to leakages from poor governance.

“So [the private sector] will bear the risk and enjoy the rewards. That will also help cut down our operating expenses… For the private sector, we want to offer clarity, certainty and consistency, targeted at building greater confidence.”

So, while Malaysia can do with more money to pay down its RM1 trillion debt, the country can function better than before, even with less revenue because spending is measured and done smartly with more checks and balances to derive the most value. There will not be any fire sale of assets and any asset sale will be done transparently with revenue going into the government’s coffers and not red files.

Helped by the shifting of some operating expenses to development expense, the amount of government revenue that goes to fund operating expenses fell to 96.1% — the lowest since 2008 if one were to exclude the one-off RM37 billion refund of excess taxes owed and the RM30 billion special dividend from Petronas.

He acknowledges, however, that there is further need to streamline operating expenses to expand its fiscal flexibility. The Debt Management Office, for instance, will help ensure that debt is only taken where necessary and at the best rate.

Asked about the recommendation in the 2019 Economic Outlook report to reform public pension from the current defined benefit system to the EPF-like defined contribution, Lim says any change will involve future civil servants and not the current base and reiterated the government’s stance to boost productivity and hire on a needs-only basis.

Emoluments and pension, which make up 41.4% of the government’s 2019 projected revenue, would account for 47% of government revenue if the RM30 billion special dividend were to be excluded. The RM26.6 billion for public pension alone is 10.1% of government revenue, 11.5% without the one-off revenue boost. Similarly, debt service charges of RM33 billion would make up 14.2% of revenue next year instead of 12.6% without the special dividend.

Based on its Nov 8 statement on Petronas, Moody’s is likely among those looking out for any increase in the government’s funding needs, which is seen as an indication of whether Petronas would again be tapped for more dividend payments.

“The negative outlook on Petronas’ rating reflects our view that the financial profile of Petronas may deteriorate if the government continues to ask the company to keep dividend payments high, especially should oil price decline,” Vikas Halan, Moody’s senior vice-president, says in the note, which did acknowledge Petronas’ ability to pay the government RM54 billion in dividend (including the special RM30 billion), up from RM26 billion in 2018.

Based on its current oil price assumption of US$50 to US$70 a barrel, Moody’s expects Petronas’ net cash position to remain at RM75 billion to RM80 billion over the next two to three years compared with RM97 billion as at June 30 and RM42.8 billion as at Dec 31, 2016.

Malaysia’s oil price assumption for Budget 2019 is more bullish at US$72 a barrel.

Lim says there is no need to recalibrate Budget 2019 numbers just yet despite Brent crude oil prices slipping below US$70 a barrel. He prefers to focus on delivering the promised institutional changes that will ensure that the whole country, not just a select group, benefits from the assets and resources that Malaysia has been blessed with.

“There are credit negatives but there are also credit positives, such as institutional reforms. We are seriously dealing with it. It all boils down to execution. If we cannot execute, then, of course [the rating agencies concerns] would be a big question. But if we can execute, I would say the outlook is positive for Malaysia,” Lim says.