The State Of The Nation: Living wage a new benchmark for Malaysia 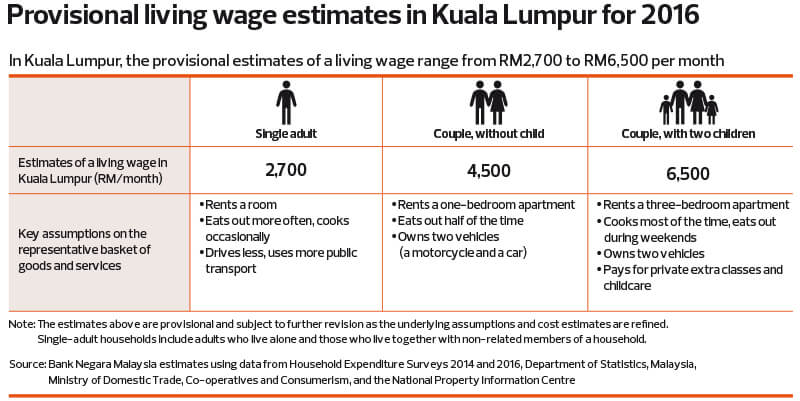 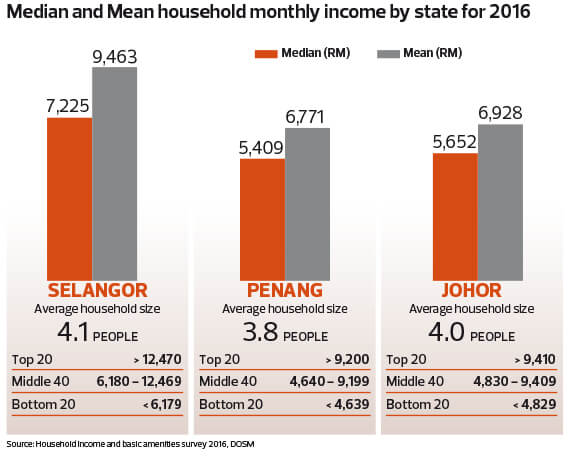 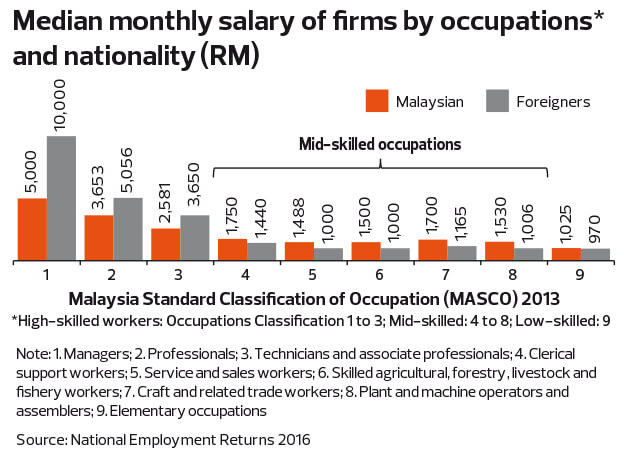 AS the country moves toward high-income nation status, living requirements should be expected to move beyond merely meeting the basic necessities of food, shelter and clothing. They should include being able to participate in society and financial security, which is called the “living wage”.

Bank Negara Malaysia’s 2017 annual report highlights that the provision of a living wage can be a step toward all citizens attaining at least a minimum acceptable standard of living.

“Using the living wage as a benchmark to assess the adequacy of current wages and social assistance, international experience suggests that it has the potential to inform, challenge and enhance policies toward the goal of achieving a minimum acceptable living standard,” says Bank Negara in its report “The Living Wage: Beyond Making Ends Meet”.

The report introduces provisional estimates of living wages for households in Kuala Lumpur, ranging from RM2,700 for a single adult to RM6,500 for a family of four (see table).

For comparison, it is worth noting that according to the Household Income and Basic Amenities Survey 2016 by the Department of Statistics (DoS), the national average household monthly income of the bottom 40% (B40) group is still grossly below the estimated living wage totalling RM2,848.

Based on Bank Negara’s living wage estimate of RM6,500 for a family of four, those in the middle 40% (M40) group would have just enough, based on the national mean monthly income of RM6,502 per household as per the DoS survey.

While it may not be a like-for-like comparison, in hot spots like Penang, Selangor and Johor, where the cost of living has often been a cause for complaint, the average monthly household income is above the living wage estimates of RM6,500 for a family of four. However, it appears that the B40 group in all three states is unable to meet this standard.

The average household size is around four people in Malaysia as at 2016.

Bank Negara’s report highlights that one third of households in Kuala Lumpur were earning below the living wage, despite the median income in Kuala Lumpur being RM9,073.

The 2016 median salaries for managers and professionals in Malaysia stood at RM5,500 and RM4,450 respectively — well above the living wage estimates for a single-adult household in Kuala Lumpur of RM2,700.

“These findings underscore the importance of creating a high-skilled workforce in Malaysia that is equipped with the necessary competencies for higher-paying jobs,” it says.

It is undeniable that productivity has to improve in order for wages to increase. But Malaysians are faced with another problem — wages have been distorted by the readily available pool of cheaper low-skilled foreign workers, which has discouraged industrial upgrading, according to Bank Negara in another report titled “Low-skilled Foreign Workers Distortions to the Economy”.

“It makes labour relatively cheap when compared to capital, and thus weakens incentives for firms to substitute labour for technology or for greater value-adding activities from the employment of higher-skilled labour,” says the report.

The report shows that the average income for foreign workers in mid-skilled occupations ranges from RM1,006 to RM1,440 while a local commands RM1,530 to RM1,750.

However, it is also interesting to note that foreign high-skilled workers enjoy higher wages than locals with the same skills. Foreigners in managerial positions are paid double what a local in the same position is, while foreign professionals are generally paid close to 40% more than a local professional.

That aside, the crux of the matter in the Bank Negara study is that the wages for mid-skilled occupations could be too low to attract local workers and employers are reluctant to increase them because of cheaper alternatives available, that is foreign workers.

“So long as blue-collar wages continue to face downward pressure, employers will not be hard-pressed to adopt productivity-enhancing measures. Consequently, Malaysia risks being trapped in a low-wage, low-skill conundrum,” highlights the report.

Bigger impact from decline in income

Separately, the Bank Negara report on debt levels notes that those in the RM3,000 to RM5,000 income group have the highest number of borrowers with negative financial margins. This category of borrowers has larger exposure to motor vehicle loans and personal financing and is under 40 years old.

Financial margin is a method to assess whether households are able to withstand unforeseen circumstances, such as shocks to income, cost of living and borrowing cost, and their impact on financial institutions.

While a rising cost of living has often been seen as one thing that could negatively impact household debt levels, Bank Negara reveals in a stress test that the effects of a decline in income would be more adverse for borrowers.

A 10% decline in income would increase the share of borrowers with negative financial margins by 5.2 percentage points from the baseline scenario to 11.7% of total borrowers. Unsurprisingly, those hardest hit under this assumption would be the already indebted borrowers with an income range of RM3,000 to RM5,000 per month.

In essence, the central bank concludes that the risk to financial stability posed by household indebtedness remains manageable. Over the years, the ratio of household debt-to-gross domestic product has been on a downward trend. In 2017, it stood at 84.3% compared with 89% in 2015.