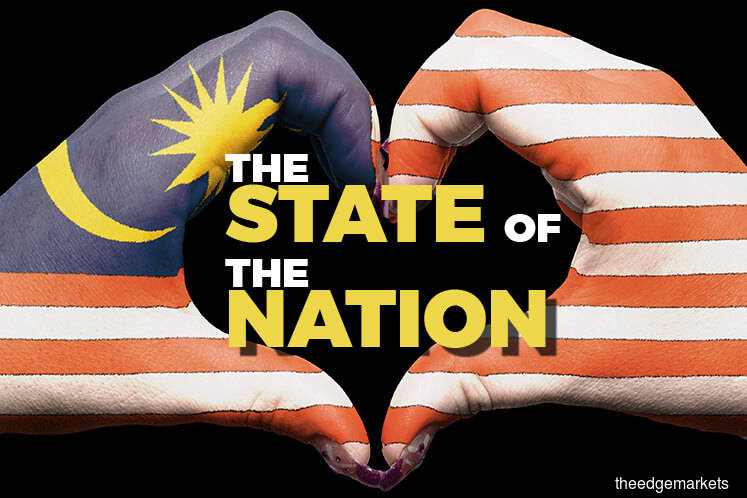 The government’s 2018 real GDP growth projection — while below Bank Negara Malaysia’s revised 2018 projection of 5% — is within the expectations of a number of economists who had cut their forecasts following weaker external demand and escalating US-China trade tensions. Bank Negara had on Aug 17 revised lower its 2018 growth estimate of 5.5% to 6% previously.

The new official growth forecast is also within the 4.5% to 5.5% annual GDP growth for 2018-2020 mentioned in the revised 11th Malaysia Plan, which was released in October.

“Despite the resilient economic performance, risks to growth are tilted [to the] downside, emanating from heightening uncertainties in the global environment, including rising trade conflict, volatility in global financial markets and oil prices as well as geopolitical tension,” the Ministry of Finance’s Economic Outlook 2019 reads.

Similarly, the global economy is expected to expand 3.7% in 2018 and 2019, lower than the forecast of 3.9%, reflecting risks stemming from escalating trade tensions and outflow of capital from emerging economies.

The current account surplus in the balance of payments is expected to remain in surplus, albeit narrowing to 2% to 3% of gross national income — from 2.5% to 3% of GNI in 2018 — attributed to lower goods surplus and widening services and income deficits.

The report, which included an assessment of the potential US-China tariff war on Malaysia, notes that almost 50% of Malaysia’s exports are incorporated into China’s final products, which are then exported to the US. Based on this assumption, Malaysia’s exports will likely decline by 0.08 percentage points, with the GDP by 0.02 percentage points over 2018-2020. “If the trade war escalates and drags down global output by 0.4 percentage points by 2020, the Malaysian economy could lose up to 0.7 percentage points,” the report says, adding that the estimate was based on an econometric analysis by the Ministry of Finance that indicates a 10% drop in global growth will reduce Malaysia’s GDP by 14%.

China has been Malaysia’s largest trading partner for nine consecutive years, constituting 13.5% or RM126 billion of total exports in 2017. Some 9.5% or RM88.7 billion of Malaysia’s exports went to the US in 2017, making it the third largest export destination.

The impact of tariffs imposed directly on Malaysia’s exports to the US — namely solar panels, washing machines, steel and aluminium — is relatively minimal with these products only making up 0.8% of total exports (RM7.3 billion) in 2017.

The concern is about Malaysia’s exports that will be indirectly impacted by the US’ tariff on China. The US$250 billion worth of Chinese projects subject to higher tariffs accounted for 12% of Malaysia’s total exports or RM108 billion (US$25.1 billion) in 2017. The bulk of the products are electrical and electronics (E&E), in particular, electronics, office machines, automatic data processing equipment as well as electrical machinery and appliances. Other products include crude oil, gas, metal ores and other mining goods as well as chemicals, plastics and rubber products.

According to the Economic Outlook 2019, Malaysia’s real GDP growth next year will be mainly supported by domestic demand. Private consumption — which accounts for 55% of GDP — is forecast to expand 6.8%, after expanding 7.2% in 2018, on higher household earnings arising from better employment outlook, implementation of higher minimum wage, steady commodity prices and accommodative financing conditions.

Private sector expenditure, particularly household spending, will remain the key driver of growth following a continuous increase in employment and wage amid benign inflation — cushioning the effects of lower public spending in 2018 and 2019. Meanwhile, private investment will be supported by new and ongoing projects in the technology-intensive services and manufacturing sectors.

Public consumption is expected to expand 1.8% in 2019 on higher spending on emoluments as well as supplies and services. Public expenditure is projected to record slower growth following lower capital spending by public corporations as well as the government’s decision to review and reprioritise expenditure without jeopardising economic growth.

The government’s development expenditure will be channelled mainly to upgrading and improving transport, infrastructure and public amenities as well as enhancing the quality of education and training.

On the supply side, the services sector is expected to remain as the largest contributor, benefiting from steady consumer spending and domestic tourism activities. The manufacturing sector is projected to register firm growth, primarily driven by continuous demand for E&E products, in tandem with developments in the global semiconductor industry. The agriculture and mining sectors are expected to rebound in 2019 after recording a marginal contraction in 2018 following an increase in the production of crude palm oil (CPO) and liquefied natural gas (LNG).

“In 2019, the construction sector is expected to improve marginally [after moderating in 2018] following an increase in new planned supply in the affordable homes and industrial segments,” the report reads.

Malaysia’s external position is also projected to remain resilient, in line with the steady global economic and trade performances. However, exports are expected to moderate mainly due to slower global trade and investment activities. At the same time, the current account surplus is expected to narrow following widening deficits in the services and income accounts.

As a highly open economy, Malaysia faces several risks relating to uncertainties in the external environment. Heightening financial market volatility as well as escalating protectionism and trade tensions could have a dampening effect on global trade as well as investment flows, and in turn, the country’s economic growth. That said, Malaysia’s near-term growth outlook remains resilient with sound macroeconomic fundamentals, stable financial conditions as well as broad-based and diversified economic structure.

“The government through various measures, will continue to strengthen structural reforms and accelerate the country’s convergence with developed economies. These include correcting the mismatch in the labour market, improving the quality of education and training, further diversifying export products and markets, enhancing innovation and adoption of technology, as well as unlocking the potential of the digital economy as a future driver of growth.”