The State of the Nation: Export growth slumps to 1.6% in November, weighed down by E&E performance 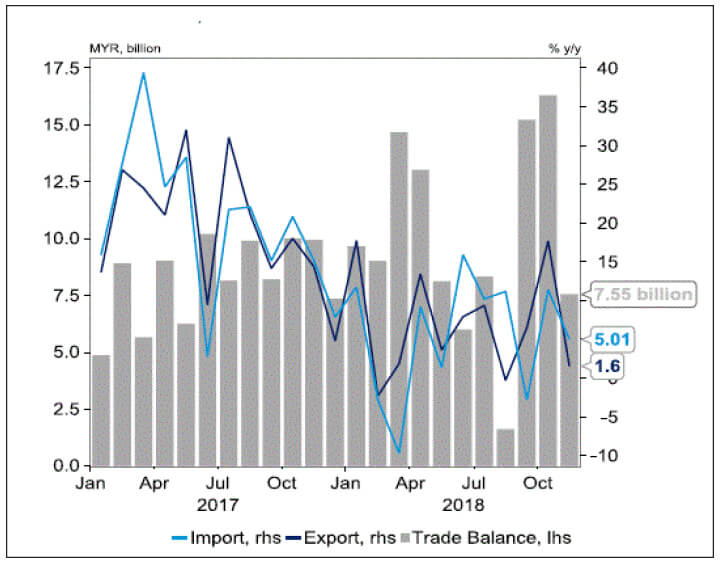 MALAYSIA’s exports in November rose 1.6% year on year, well below the consensus estimate of 6.6%. The November numbers, released last Friday, disappointed, especially on the back of the previous month’s exceptional 17.7% y-o-y expansion.

The slowdown mirrors regional export trends as producers front-loaded orders in October ahead of the initial planned tariff hikes by the US and China that were to take effect this month, according to a UOB Research report.

The main drag was in the electronic and electrical (E&E) products segment, which shrank 1.7% y-o-y to RM31.2 billion — a significant deterioration for the segment, which represents about 37% of the country’s total exports.

The decline is the first since March 2018 and the lowest since August 2016, according to MIDF Research, which attributed it partly to increasing competition.

“The rise of low-cost manufacturing and assembly in Asean countries such as Vietnam, which is an increasingly important global hub, poses [a] threat to Malaysia. Such an alarming situation would need the local E&E players to transform the industry towards higher value-added segments in order for them to remain competitive in the global supply chain,” the report states.

Undoubtedly, all eyes will be on the export performance of the E&E segment in the months ahead.

“The growth in global demand for semiconductor sales is slowing down. The sustainability of the E&E exports would matter for our export growth this year,” says Affin Hwang Research chief economist Alan Tan.

Last week, the Semiconductor Industry Association reported that global sales of semiconductors rose 9.8% y-o-y to US$41.4 billion in November last year, from US$37.7 billion a year earlier. This was 1.1% lower than October 2018’s total of US$41.8 billion, and further highlights that growth has been slow in recent months.

About 52% of the country’s total imports make up intermediate goods, which contracted 0.3% in November to RM40.2 million.

“From the numbers, it looks like export numbers for December 2018 and January 2019 will likely remain weak,” Tan adds.

MIDF Research is of the view that the contraction in the import of intermediate goods could indicate rising demand for raw materials among domestic manufacturers.

However, Nikkei’s Manufacturing Purchasing Managers Index (PMI) for Malaysia showed a further contraction in December to 46.8 points from 48.2 in November — the lowest level since the survey started in July 2012.

While palm oil shipments also saw a steep decline of 21% y-o-y in November, its impact on total exports is significantly smaller at around 4%.

MIDF Research says the larger decline in November was a result of falling demand from both China and India. However, it expects palm oil sales to improve starting January on the back of higher demand from India because of a reduction in import taxes on crude and refined palm oil from Asean countries.

Imports grew by 5% in November, outpacing the 1.6% pace of exports. As a result, the trade surplus in November declined RM2.4 billion to RM7.6 billion, the lowest in three months, taking the year-to-date surplus to RM 109.6 billion.

“That said, some of the negative impact may be offset by relocation of production into Southeast Asia. Malaysia’s robust shipments to Taiwan, South Korea, and Asean would suggest that some production shifting is already happening amid ongoing trade tensions,” it says.

Affin Hwang’s Tan highlights one downside risk: What would happen after the 90-day ceasefire between US and China ends?

On that note, the US and China will be meeting on Jan 7 and 8 for trade talks. which will be closely monitored globally given the risk that they may not reach any consensus, thus escalating the trade war further.

Exports are expected to moderate from 8.5% in 2018 to between 4% and 5% in 2019, according to UOB Research. MIDF Research is slightly more bearish, projecting export growth to average at 3.6% this year on the back of a higher base effect and continuous signs of easing key global indicators.