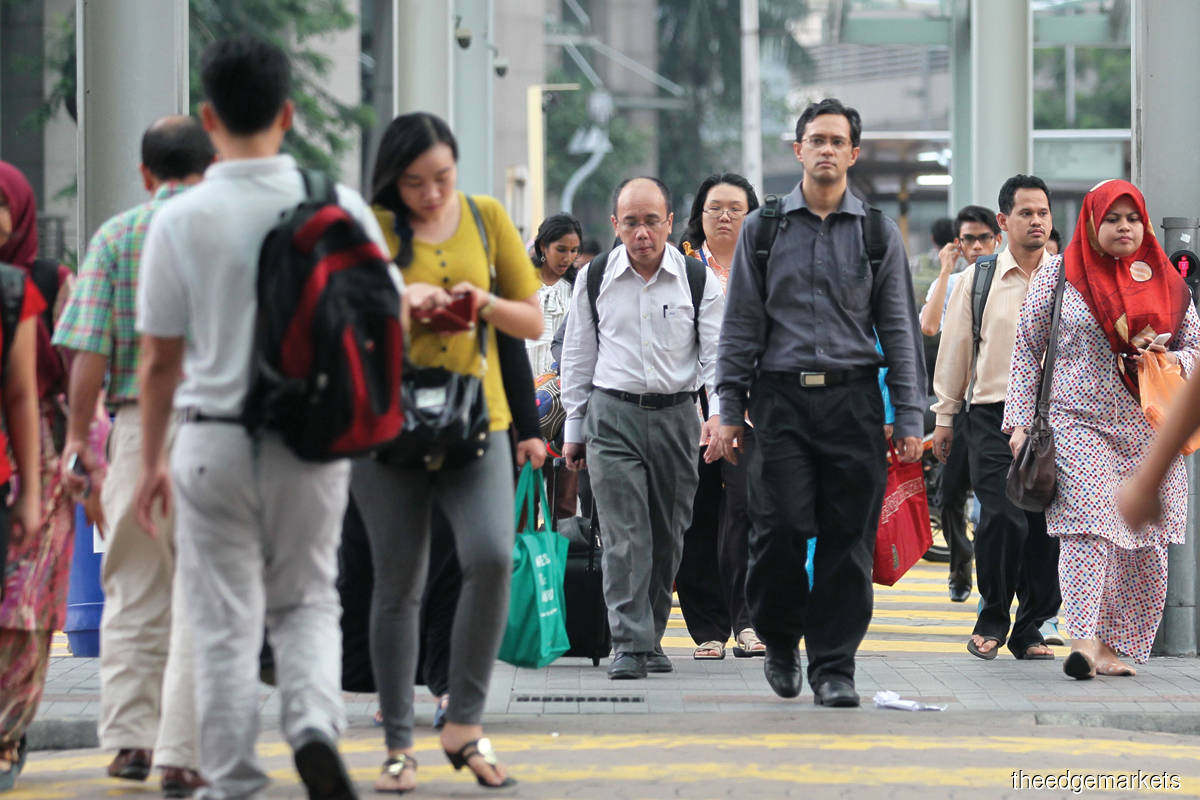 HOUSEHOLDS under the Poverty Line Income threshold have received the smallest percentage of government cash handouts in recent years, according to a government survey, underlining some of the deficiencies in Malaysia’s social protection system, including weak verification capacity and fragmented policies by multiple government agencies resulting in more than 60 such programmes.

Indeed, the magnitude and scale of the Covid-19 pandemic has revealed critical gaps in the social protection system, in the form of its effectiveness, implementation as well as sustainability, and involves all pillars of social protection, according to the central bank.

Bank Negara Malaysia in its Economic and Monetary Review 2020 report says a holistic review of the entire social protection system is needed to ensure its continued ability to act as an automatic stabiliser during crisis periods.

“Emphasis needs to be given to ensure more efficient delivery and better coverage of the most vulnerable, and improved labour mobility in order to reduce the over-reliance on social safety nets,” Bank Negara says in an article in the report entitled “A Vision for Social Protection in Malaysia”.

Based on a Household Income and Expenditure Survey done in 2019, the central bank notes that households under the Poverty Line Income threshold received the smallest percentage of the Bantuan Sara Hidup cash handouts or BSH allocation in 2019. The programme has now been renamed Bantuan Prihatin Rakyat or BPR.

“While accounting for 17.4% of households in the bottom-40% income group (B40), this group received only 12% of the total allocation that year. Weak verification capacity also led to relatively high occurrences of both inclusion and exclusion errors.

“For instance, verification to determine eligibility for BSH was based primarily on LHDN (Inland Revenue Board) data, which captured only those in formal employment, making it challenging to validate the eligibility of the self-employed and workers in the informal sector,” says Bank Negara. The effectiveness of these programmes was also limited by the lack of mechanisms for recipients to graduate from the social safety net programmes as they were not integrated and linked with active labour market policies (ALMPs).

“This indirectly increased the over-reliance of beneficiaries on social safety net programmes as a source of income and may not have helped to address intergenerational poverty in the long run,” the central bank says.

Currently, most of the fiscal outlay for social protection programmes in Malaysia goes towards social safety nets. This is predominantly the result of fragmented policies managed by multiple agencies at both federal and state government levels.

“Despite the sizeable expenditure of RM17.1 billion in 2019 , the payout amounts under each programme tended to be small and insufficient to ensure that the most vulnerable households were able meet minimum income and living standards, as allocations are spread over more than 60 programmes.

“The fragmentation also resulted in overlapping and identical assistance being provided and managed by several different ministries. Inadvertently, this, together with the existence of numerous databases managed by multiple agencies, made verification and enforcement particularly challenging and has led to leakages,” says Bank Negara.

As there are currently more than 60 programmes under several agencies and ministries, serious considerations should be made to consolidate the social safety net programmes under the flagship BPR programme, and complemented with more granular categorisation, it suggests.

“The smaller number of programmes with narrower criteria based on income and household size would likely allow for more targeted and effective disbursements and further boost the progressivity of these policies.

“To minimise inclusion and exclusion errors, the verification capacity could be improved by introducing compulsory registration at LHDN for all citizens regardless of income levels, which would further widen the coverage of LHDN’s database,” the central bank says.

According to Bank Negara, social insurance in Malaysia faces several challenges, particularly in terms of sufficiency and sustainability, further compounded by the country’s ageing population.

“Sufficiency of retirement income is a critical issue for private sector employees as Malaysia moves towards an ‘aged nation’ status, with the old-age dependency ratio expected to increase to 16.6% by 2040 from 8.5% in 2015.”

Based on a study conducted by the Employees Provident Fund (EPF) in 2018, two out of three active EPF contributors are projected to have insufficient retirement savings to meet a minimum pension of RM1,000 per month.

“Private retirement schemes, on the other hand, provide limited support in addressing this issue, since less than 3% of Malaysia’s workforce (aged 20-59) have a Private Retirement Scheme account,” Bank Negara highlights.

Furthermore, the capacity of the B40 working population to withstand income shocks, such as permanent disability and the death of a breadwinner, is inadequate given the low private insurance penetration rate for this segment at 24.9% as at 2017.

“For employees in the public sector, there will be an issue of fiscal sustainability following rising liabilities from the defined-benefit pension scheme.

“As at 2019, the share of pension liabilities of the total federal government operating expenditure has increased to 9.8% from 6.5% in 2009.”

However, Bank Negara says due to the infancy of the social insurance system and the potential operational and implementation challenges, the expansion of the coverage of such schemes could be approached in a gradual manner. “In the immediate term, addressing the lack of retirement savings for employees in the private sector will be vital. Incentives such as Matching Defined Contribution could be introduced to nudge interest towards private retirement schemes.

“For the public sector, a move towards a defined contribution scheme for new hires needs to be prioritised given the burden posed by the prevailing system on the government’s fiscal position. This would, however, present its own set of challenges, particularly in ensuring continued interest to pursue a career in the public service.”

Bank Islam Malaysia Bhd chief economist Dr Mohd Afzanizam Abdul Rashid concurs with Bank Negara’s view that savings for retirement should be the main focus going forward when it comes to social protection reforms, given the country’s move towards an “aged nation” status.

“When the pandemic hit, EPF members were allowed to withdraw their funds in order to ensure that livelihoods were being taken care of in the immediate term. However, it is always a delicate balance between saving for the future and addressing the current financial needs when unemployment is expected to remain high in the near future.

Bank Negara points out that the design of social protection programmes should serve a counter-cyclical role by ensuring their quick and effective deployment during economic downturns. “Ultimately, the programmes should reinforce economic security as a foundation for building a society that is socially cohesive, economically inclusive, and that promotes equitable opportunity for all.”

Bank Negara Malaysia does not have any immediate plans to issue central bank digital currency (CBDC).

The central bank said in Malaysia, the financial system continues to support the functioning of the economy while meeting the needs of individuals and businesses.

The report noted that technological advancements and the increasing pace of digitalisation have led to the rising adoption of digital payments and the emergence of privately issued digital assets, among them Bitcoin, Ethereum and Stablecoin.

Most digital assets, in their current form, are not used as payment instruments, primarily because they do not exhibit the universal characteristics of money, it said.

In essence, Bank Negara said, their characteristics prevent them from being a good store of value and medium of exchange as they are prone to price volatility, vulnerable to cyber threats and lack scalability.

“For example, the price of Bitcoin recorded a steep decline of 39% within a single day in March 2020. Hence, it is crucial for the public to have a clear understanding of digital assets, such as their features, underlying technology, and corresponding risks,” it said.

Given that this is a rapidly evolving situation, the central bank said it will actively assess the potential value proposition of CBDC in the light of developments in the digital assets and payments space.

It said key policy decisions on CBDC will be guided by clear benefits to Malaysia as a whole, while ensuring that the associated risks arising from CBDC issuance, particularly financial stability risks, are effectively managed.

CBDC issuance, Bank Negara said, should complement existing payment instruments, including physical cash, to ensure that all Malaysians, in particular the underserved communities, have continued access to safe and efficient payment solutions.

“We will also actively monitor the trend of key indicators with direct impact to our mandates, which may provide useful data points for us to evaluate the merits of CBDC issuance.

Bank Negara added that as part of its efforts to enhance understanding of the associated risks and policy implications of CBDC, the central bank is actively building internal capacity to support informed decisions on CBDC issuance, including conducting proof of concept. — Bernama