Star-studded legal team will seek to save Samsung chief 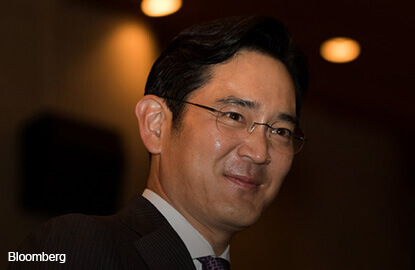 SEOUL (March 3): Samsung chief Jay Y Lee has handpicked 13 top lawyers to defend him against charges of bribing the South Korean president, nearly all of them former judges or prosecutors, according to the court where one of the richest men in the country will be tried.

Lee, 48, was indicted by a special prosecutor's office on Feb 28 on charges of bribery and embezzlement over his alleged role in the corruption scandal involving impeached President Park Geun-hye. Four other Samsung executives have also been charged, a massive blow for the world's biggest maker of smartphones and memory chips.

Described as the "trial of the century", court proceedings begin on March 9, and if convicted, Lee could face more than 20 years in prison. A verdict has to be delivered within three months.

Seoul Central District Court records showed that Lee has assembled a team of 13 outside counsel for his defence, 10 of whom work for Bae, Kim & Lee (BKL) — the country's second-largest law firm by headcount, and known for litigation expertise.

Kim was given a suspended three-year sentence after being indicted for embezzlement and breach of trust, while Chey was sentenced to four years in jail in 2013 for misappropriating company funds and served two years before receiving a presidential pardon.

According to South Korean media, two of the defence lawyers were considered for the special prosecution team they will now fight in court.

"In numbers we may be behind Samsung's extravagant team of lawyers but in terms of our ability and what we've achieved so far, you don't need to worry," said a special prosecution official, who declined to be named due to the sensitivity of the case.

The special prosecution team will be led by Yang Jae-sik, an assistant counsel and a long-time prosecutor, the official said.

Yang worked on several high-profile criminal cases as a prosecutor, including a 2006 probe into whether senior South Korean government officials colluded with private equity fund Lone Star Funds to allow the US firm to acquire Korea Exchange Bank at less than fair value. He was also part of a team that investigated Park Jie-man, brother of the current president, when he was arrested for drug use in 1996.

BKL declined to make its attorneys available for comment, while the other three defence lawyers declined comment or were not immediately available.

On its website, BKL says it was founded in 1980 and provides legal services in diverse areas, including corporate law and governance, litigation, international arbitration and tax, among others.

According to Asian Legal Business (ALB), a part of Thomson Reuters, the firm has 520 fee-earning lawyers on its books, the second-highest of any South Korean law firm.

Samsung Group declined to comment on the legal defence team, but said it was formed by Lee personally.

Among the most experienced attorneys on the team is Moon Kang-bae, a graduate of the elite Seoul National University Law School who spent roughly a decade as a judge before joining BKL in 2000. He and two other BKL lawyers on Lee's defence team helped secure the suspended sentence for the Hanwha chairman.

Moon was considered a potential assistant to current special prosecutor Park Young-soo, according to South Korean media, and was in the 2007-2008 special investigation team that investigated then president-elect Lee Myung-bak's involvement in an embezzlement scandal. Lee was eventually cleared of wrongdoing.

Another senior attorney on Lee's team is Cho Gun-ho, head of law firm HM Partners and a long-time prosecutor who served as a senior aide to former President Kim Dae-jung along with Park, the special prosecutor.

Lee, who has been held at the Seoul Detention Centre since his Feb 17 arrest, is charged with bribing President Park through her confidante Choi Soon-sil to curry favour and cement family control of the Samsung Group with transactions such as a controversial 2015 merger of two Samsung companies.

Park, Lee and Choi have all denied wrongdoing.

During a December parliament hearing, Lee said he was not aware of the payments made by Samsung until the scandal emerged.

"Samsung has not paid bribes nor made improper requests seeking favours," Samsung Group said in a statement to Reuters, noting the 2015 merger in question was approved by shareholders prior to any donations that were paid out.

"We will do our best to ensure that the truth is revealed in future court proceedings."

After the trial in the Seoul district court, the case can be appealed - in the Seoul High Court and the Supreme Court. They must issue rulings on the appeals within two months each unless there are special circumstances.