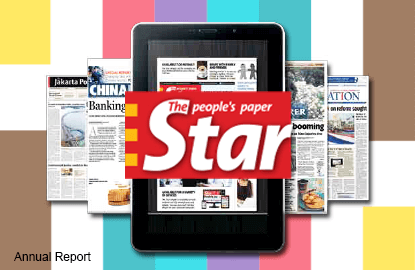 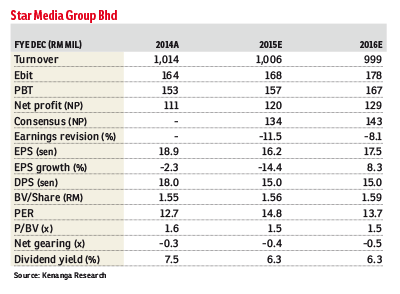 On our end, the key negative culprits were mainly attributed to the higher-than-expected direct cost (from Cityneon Holdings Ltd), operating expenditures, and finance cost.

No dividend was declared during the quarter, as expected. Star Media has earlier highlighted its intention to maintain 18 sen full-year dividend per share (DPS) should its core profit before tax (PBT) is maintained at about RM190 million.

Nevertheless, we believe this is a tall order judging from its uninspiring 9MFY15 results. Thus, we are keeping our 6 sen DPS estimate for the coming 4QFY15, which could bring its FY15 total DPS to 15 sen.

Y-o-y revenue in 9MFY15 inched marginally by 0.7% to RM738 million due to higher contribution from the event segment but largely offset by the lower turnover in the print and radio divisions. Its PBT, meanwhile, dipped by 9.4% to RM110 million, no thanks to the higher direct costs (from Cityneon) and lower print segment revenue.

Print and digital revenue contracted by 7.9% mainly due to lower revenue as a result of the cautious spending post goods and services tax (GST) implementation, the weakening ringgit and also the softer local economy. PBT, however, improved slightly by 2.4% due to the absence of voluntary separation scheme expenses (1H14: RM11.5 million).

Radio broadcasting segment’s revenue, meanwhile, declined by 4.1% as a result of the uncertainties and challenging market environment. The segment, however, recorded a small PBT of RM200,000, thanks to the absence of amortisation cost on Capital FM’s radio licence.

The television division’s revenue improved to RM8.7 million (14.2%) but continued to suffer a loss before tax (LBT) on the back of higher direct cost and weaker ringgit. On the other hand, the event division’s revenue advanced by 31% as a result of higher event and thematic revenue but incurred an LBT of RM3.6 million due to lower profit margin and the RM2.2 million acquisition related cost of Victory Hill Exhibitions Pte Ltd that was recognised in 2QFY15.

Quarter-on-quarter 3QFY15 turnover dipped by 4.4% as a result of lower print and digital contribution (-5%) and event revenue (-7%). Its PBT, however, plunged by 32% to RM29.2 million due to the higher direct and operating costs incurred in both print and event divisions.

Our gloomy adex outlook remains unchanged and we believe the adex sentiment is still being overshadowed by the current rising cost of living, higher cost of doing business as a result of the weakening ringgit, and the weak consumer sentiment caused by the GST implementation, which the market may take months to digest.

We have slashed our FY15E (estimate)/FY16E net profit by 11.5%/8.1% after raising assumptions for the event division’s direct cost assumption to 70% (from 67% to event’s division turnover previously), operating costs (ie distribution and administrative expenses), and finance cost.

We maintain its market perform rating and lowered the TP (from RM2.52 previously).  Our valuation is based on FY16E earnings per share of 17.5 sen with an unchanged targeted price earnings ratio of 13.5 times, representing -1 times standard deviation below its mean. — Kenanga Research, Nov 17