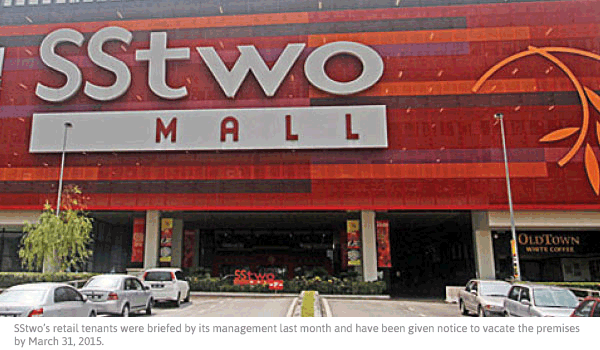 PETALING JAYA: Asian Retail Mall Fund II (ARMF) is planning a redevelopment of the SStwo Mall in Petaling Jaya, involving a partial demolition of the structure and building a serviced apartment block, according to sources.

It is learnt that ARMF has been in talks with several property developers on a joint venture to undertake the redevelopment and repositioning of the mall, following failed attempts to sell it off.

“Their first option was to sell the property. But, if it can’t, it plans to form a joint venture with a local developer to reduce the mall size and to build serviced apartments on top of the mall,” a source said. The mall opened for business in Novermber 2010.

“It has been in talks for months and is likely to finalise things in the next few weeks,” the source said, adding that tenants have already been given notice to vacate the premises. The fund was hoping to sell the mall for at least RM250 million. It was reported that the cost of building the mall was RM180 million.

The Edge Financial Daily understands that the new partner could be a developer who has experiece in high-end condominimum development and mall management. The serviced apartments may be sold for as much as RM900 per sq ft.

According to another source, the current retail space may be reduced to a third of the size, possibly just sufficient to help support the tenants who will occupy the units. The mall sits on 7.8 acres (3.156ha) of land. Its has a gross floor area of 700,000 sq ft and a net lettable area of 460,000 sq ft. The portion that is likely to be redeveloped is the back of the mall, where the shoplot and open square area is situated.

SStwo’s retail tenants were briefed by its management last month and have been given notice to vacate the premises by March 31, 2015. The fund is expected to compensate some of its eligible tenants.

As at December 2013, the total liabilities accounted for RM154.75 million, of which RM102.22 million are current liabilities. The share premium account is at a negative RM130.22 million. The company is wholly-owned by AsiaMalls Sdn Bhd.