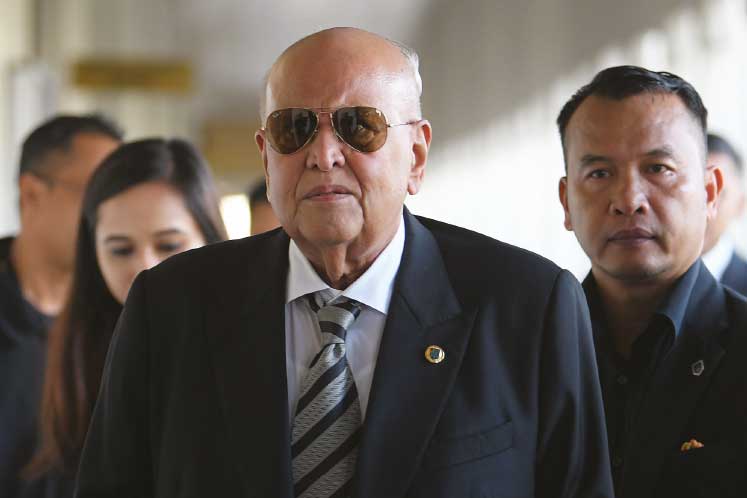 In this case, former Prime Minister Datuk Seri Najib Razak has been accused of ordering the final audit report of the troubled fund be altered before it was tabled to the Public Accounts Committee to evade disciplinary, civil or criminal action against him in connection with 1MDB. Meanwhile, former 1MDB chief executive officer Arul Kanda Kandasamy has been charged with abetting him.

This trial is an offshoot of what has come to be known as the 1MDB scandal.

1MDB is a company in which the accused Najib had a material interest. He held shares in it, albeit as a Minister of the Crown. He was also its preference shareholder. Additionally, he exercised supreme power over it. The accused Najib concerned himself in the affairs of 1MDB. Evidence will be led to show that the board and management of that company was accustomed to act upon his direction. Therefore, for the purposes of company law and indeed the general law he was a shadow director of 1MDB. As such he would be both civilly and criminally liable for any breach of the duty he owed to the company.

Monies belonging to 1MDB flowed into the account of a company called Good Star Limited which was controlled by the accused Najib’s mirror image or alter ego, a man called Low Taek Jho or Jho Low of whom the accused was particularly protective. Some of those monies also went to Najib’s stepson, Riza Shahriz bin Abdul Aziz. Najib also received large amounts of money belonging to 1MDB. Although he knew that the monies in question belonged to 1MDB, he lied to the world at large that they were a donation from Saudi Arabia.

The adage is that truth will out. That happened here. Sometime in early July 2015 the 1MDB scandal broke. It received wide  publicity. Najib then began to cover his tracks. Much of what he did forms part of the ongoing trial in the 1MDB case before Mr Justice Sequerah. One of the steps that Najib took to cover his tracks on the extent of his role and that of Jho Low in the business and affairs of 1MDB gives rise to the charge in this case. His objective was to conceal the truth.

In due course, the Auditor General caused his report on 1MDB to be prepared. There were passages in that report that caused concern to Najib though they were true in fact. He became nonplussed if not agitated. He took positive steps to have those passages altered or removed. What happened was abnormal. Despite the fact that the report was ready to be placed before the Public Accounts Committee of Parliament, a meeting was convened on 24 February 2016 at Najib’s behest. It was chaired by the Chief Secretary. As a result of what transpired at that meeting the relevant passages were amended or removed. The nature and extent of the change is reflected in Annexure A to the amended charge.

The accused Arul Kanda by his conduct, preceding the meeting in question, at that meeting and following it, abetted the accused in this transaction. I am duty bound to inform the court that at the appropriate stage the public prosecutor will apply in writing under section 63 of the MACC Act to call the accused Arul Kanda to give evidence on the prosecution’s behalf. We will be addressing the court on this part of the case at the appropriate stage.

The prosecution will, by direct and circumstantial evidence, prove the extent to which the accused went to remove, material from an official record to prevent disclosure of the true state of affairs. Najib knew, or it was certainly within his contemplation, that if the truth emerged, he would be exposed to civil or criminal liability for the reasons already stated. This is an objective fact which the prosecution will establish through the acts and omissions of the accused in the circumstances of the case.

The accused used his position as the Prime Minister and Minister of Finance to direct the removal of material information as specified in Annexure A to the amended charge. He did so with a corrupt intention as required by section 23 of the MACC Act 2009. The prosecution will show that the accused Najib did what he did in order to avoid civil or criminal liability that would have visited him as a shadow director of 1MDB as well as in his positions as Prime Minister and Minister of Finance and hence obtained gratification within section 3 of the MACC Act.

That in most if not all corruption cases the prosecution has to rely on the evidence of interested witnesses is a fact that has received judicial recognition. This case is no different. In proving its case the prosecution will have to rely on the evidence of witnesses whose testimony the court will have to approach with caution. Having done so the prosecution will show that the evidence in this case is both credible and corroborated in material particulars. Further, the totality of the evidence will lead to the irresistible conclusion that not only was the crime in question committed but it was the accused who committed it. It is also our duty to inform the court that you may hear evidence from witnesses who may display an obvious bias in favour of the accused. Their evidence is necessary for the unfolding of our case. We will at the appropriate stage address the court on the way in which the evidence of such witnesses is to the evaluated.

We now move to call our evidence.