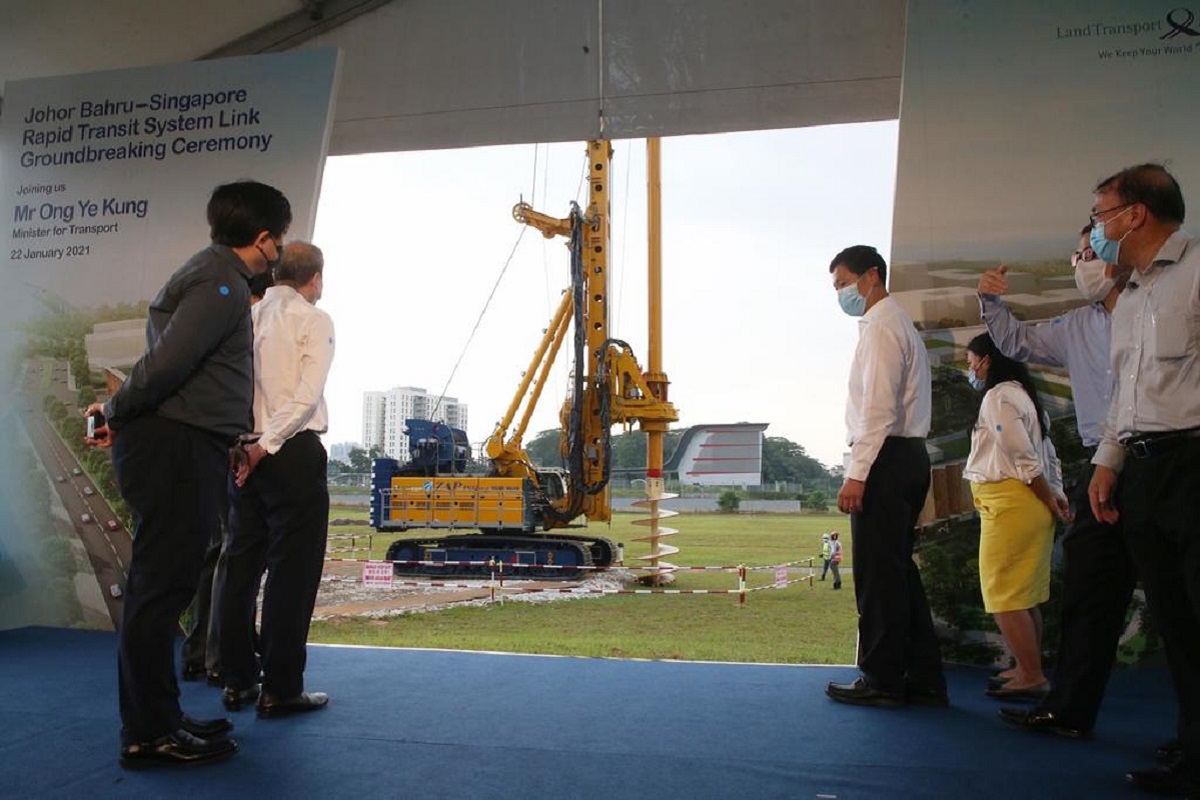 The information was released as Singapore's Transport Minister Ong Ye Kung officiated a ground-breaking ceremony that marked the start of the construction of the RTS Link at a project site situated along Admiralty Road West.

The 4km rail shuttle service, which will allow travellers to cross the Straits of Johor and reach Bukit Chagar in Johor within five minutes, is scheduled to begin passenger service by the end of 2026.

It can serve up to 10,000 commuters per hour each way. Malaysia started constructing its side of the infrastructure last November.

Yesterday, the LTA also said that the Woodlands North station will be seamlessly connected to the Thomson-East Coast Line’s (TEL) Woodlands North MRT Station, which opened last January, via an underground concourse.

Speaking at the ground-breaking ceremony, Ong noted that the Woodlands North area will become more accessible by train, connecting it directly to the city centre, as more phases of the TEL open in the next few years. A transport hub will also be built there, he said.

Besides these, the LTA is also developing the North-South Corridor in the area — said to feature dedicated bus lanes, cycling trunk routes and pedestrian paths — which will provide an efficient connection between Woodlands and Sembawang towns to the city centre and other surrounding developments, he said.

“Taken together, these transport connections will support and enhance the larger development plans to transform Woodlands into a key growth hub and thriving employment gateway for the northern region of Singapore, just like Jurong [and] Tampines,” said Ong.

Apart from outlining the transport developments, Ong also pointed out that JTC is spearheading several industrial developments nearby.

The first two of these developments — 1 and 7 North Coast — will be completed later this year, and will offer close to 90,000 sq m of manufacturing spaces, complete with shared business facilities and eateries, he said.

“In the coming years, Woodlands will be revamped, revitalised and rejuvenated ... and the RTS Link when operational will serve as a key gateway to these developments,” he added.

First announced in 2010, the project’s completion date was originally set at end-2024, but it was suspended at Malaysia's request in 2019 and only resumed on July 30 last year.

On the significance of yesterday’s event, Ong said: “I am glad to see both countries taking concrete action on the project and I am confident that we will work hard together to deliver the project on time, scheduled to be 2026.”

It was previously announced that those commuting on the RTS Link would only have to go through immigration clearance once, at the point of departure, as CIQ facilities would be co-located.

It was also said that it would feature a 25m-high bridge linking an underground station in Woodlands North to the above-ground Bukit Chagar station in Johor.

The LTA gave more details in a fact sheet yesterday, saying that the RTS Link Woodlands North Station will be constructed underground at a maximum depth of 28m.

There will be three storeys, with two basement levels and an underground linkway to the CIQ building, it added.

Construction activities will be “carefully managed” to minimise the impact to the general public and ensure the structural safety of the surrounding infrastructure, which includes an operational MRT station and live utilities, the LTA said.

At Malaysia’s virtual ground-breaking ceremony on Nov 22, Transport Minister Datuk Seri Dr Wee Ka Siong had given assurance of the Malaysian government’s commitment in making sure that the project would be carried out effectively and in an organised manner, and be completed by end-2026.

When it is ready, the link will be operated by RTS Operations, a joint venture formed by Prasarana Malaysia Bhd and Singapore’s SMRT Corporation Ltd.

The first of two civil contracts for the construction of the RTS Link was awarded to Penta-Ocean Construction Co Ltd, the LTA said.

This contract covers the construction of the Woodlands North station, tunnels and the CIQ building in Singapore.

The second civil contract covers the construction of the RTS Link viaduct, and is targeted to be awarded in the first quarter of this year.