Splash is worth at least RM2.8b, says Gamuda boss 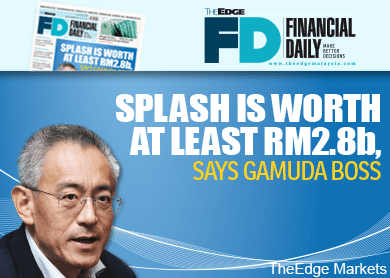 KUALA LUMPUR: The Selangor government will meet with officials of Syarikat Pengeluar Air Selangor Holdings Bhd (Splash) today — the first official meeting that the water concessionaire will have with the state after Mohamed Azmin Ali has taken over the menteri besar (MB) post.

There are talks that the state may be tabling a fresh offer to Splash.

However, when contacted, the Splash official said he was not aware of such a plan, adding that the meeting could just be the usual dialogue on matters pertaining to water operations, such as non-revenue water.

Resolving the water impasse, which has dragged on for nearly six years, is among the challenges that Mohamed Azmin is facing as MB.

Gamuda Bhd group managing director Datuk Lin Yun Ling said Gamuda — which controls a 40% stake in Splash — will only relinquish the water treatment assets to the Selangor government if the offer price is at its book value of RM2.8 billion, at least.

Splash rejected Selangor’s last offer on the grounds that it made a net gain of only RM250.6 million — barely 10% of its then book value of RM2.54 billion.

Speaking to the media after Gamuda’s annual general meeting and extraordinary general meeting yesterday, Lin said this expectation is based on the past water consolidation exercises in six states in which the deals were concluded at a book value on a willing buyer-willing seller basis.

“Very few people would expect it to be any different for Selangor,” he commented.

According to Lin, Splash owners would not pocket any gain nor incur any loss if they were to part with the water treatment assets at book value.

He said to resolve the water deadlock Gamuda would agree to make an “acceptable compromise” to forego future earnings in Splash amounting to RM1.4 billion at the net present value.

Splash is the only one of four water concessionaires in Selangor that has yet to agree on the state’s takeover deal and now faces the prospect of a forced takeover under Section 114 of the Water Services Industry Act 2006 (Wasia). The other concessionaires are Puncak Niaga Holdings Bhd, Syarikat Bekalan Air Selangor Sdn Bhd (Syabas) and Konsortium Abass Sdn Bhd.

“We would like to see that any resolution of Splash would be done in a market-friendly way. We will not want to be too rigid or be in a position to demand,” he said.

On the possible invocation of Section 114 of Wasia in acquiring Splash, Lin added: “Foreign fund managers have conveyed their views to us. They think this is a high-handed way to resolve the issue.”

This article first appeared in The Edge Financial Daily, on December 5, 2014.