Special Report: Why high T20 numbers may have scant meaning 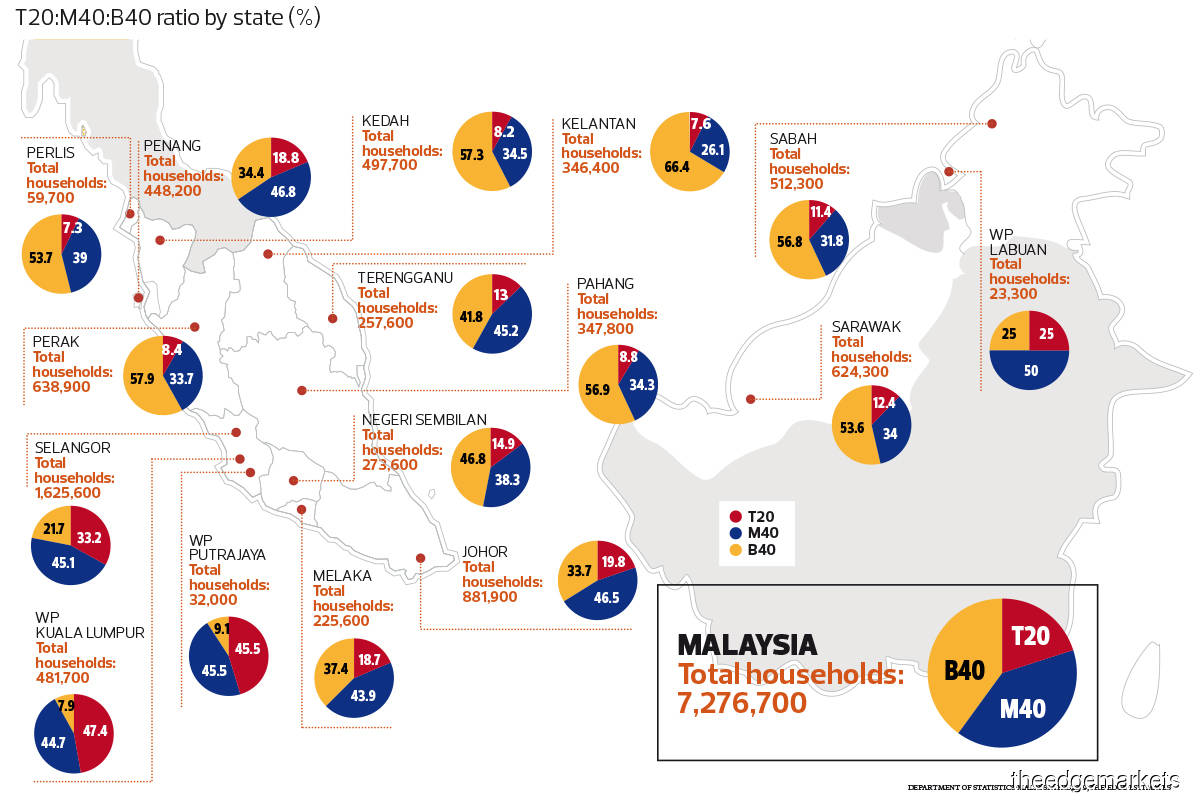 IN seeking equitable growth for all Malaysians, a lot of attention is understandably being paid to the bottom 40% of households (B40), which is deemed the most vulnerable income group.

The grouses of the middle-income group — deemed “too rich” to receive government aid but not feeling particularly rich in the face of the high cost of living — have also been gaining voice in recent years as more people are priced out of the housing ladder.

Many of these middle-income earners are believed to reside in the Klang Valley (Selangor, Kuala Lumpur and Putrajaya) as well as larger cities in Malaysia such as Penang and Johor, where the cost of living is higher than in smaller towns but also have higher paying jobs.

It is interesting to note that 539,900 — or 37.1% of 1.46 million — households in Malaysia, which are deemed to be in the country’s top 20% (T20), live in Selangor. That is according to our back-of-the-envelope calculations based on data from the Department of Statistics Malaysia’s (DoSM) 2019 Household Income Survey (HIS2019). Yet, going purely by the absolute number of B40 households alone, there are actually more B40 households in Perak, Selangor and Johor than there are in Sabah and Sarawak, our extrapolation of the HIS2019 data shows. That has yet to take into account the difference in standard of living.

The HIS2019 defines T20 as households with income of at least RM10,960 a month and the B40 as those with incomes below RM4,850 a month. Barring conversion of the RM10,960 into, say, the US or Singapore dollars, a monthly income of RM10,960 is more than decent — for an individual without dependents.

It would seem that the government — the current one as well as the one it replaced in March — is using the RM100,000 in annual income threshold as a benchmark of sorts (which works out to a monthly income of RM8,333 assuming zero bonus), going by the eligibility criteria for its e-wallet free cash initiative.

As at Aug 7, a total of 7.44 million Malaysians had each received RM50 in their e-wallets — which is equivalent to a RM372 million injection into the economy under the ePenjana initiative launched at end-July (claimable until Sept 24), without counting the bonus provided by the three e-wallet providers Boost, GrabPay and Touch ‘n Go. In the first quarter of the year, about 15 million Malaysians aged 18 and above stood to benefit from a similar RM30 e-Tunai Rakyat initiative, based on numbers released by the previous administration in January, which used a similar eligibility threshold of RM100,000 in annual income.

The RM10,960 income threshold for those deemed to be in the T20, however, does not necessarily mean that these households are rich or that the government automatically thinks they are rich. The threshold just happens to be the cut-off point for the top 20% households in Malaysia when looking at the income levels of the 7.28 million Malaysian households in 2019.

That, in essence, was the example given by Minister in the Prime Minister’s Department (Economy) Datuk Seri Mustapa Mohamed in Malay in Parliament last Tuesday in reply to a question on the availability of granular data for policymaking to eradicate poverty.

Yet, the size of the households — or more specifically, the number of dependents that the income earner has — is essential in determining whether government or social assistance is required. Whether or not one is rich also depends on the level of savings and disposable income, not just the level of gross income. We also know from the HIS2019 data that only 559,800 or 7.7% of total households were single persons last year — up from 449,200 in 2016. It is probably among this group of individuals that the government may well be looking to gain more taxable income from.

While there are economies of scale when resources are pooled and shared, a simple division of the T20 median monthly income of RM15,343 by the five persons in the household yields only RM3,069 per person. Dividing that figure by two (assuming two income earners) would still yield RM7,672 per person — which would qualify both persons for the ePenjana initiative, for instance.

In short, being counted as a T20 household does not necessarily mean one is well off. In fact, granular data may even point to instances where a household consists of four or five low-income earners living together because they cannot afford to buy their own home.

Mustapa, in his reply in Parliament last Tuesday, mentioned that for policymaking decisions, the government has more granular data than what has been shared in the public domain by DoSM.

It was even heartening to hear him say that the poor need to be helped, regardless of race or where they lived. He admitted that Covid-19 had exposed shortcomings in terms of aid delivery and that there was a need to consolidate and eliminate any duplication in the various databases at the federal and state levels as well as private and public agencies helping the vulnerable in society. His reply in Parliament on the issue of poverty also touched on intra-race inequality.

While reducing inequality is a battle taken on by many governments around the world, it would be more useful to find out and communicate why there is a difference in income levels between and within the various races in Malaysia and work on solutions by targeting the root causes. Is it because of the difference in the level and quality of education and skill sets as well as the choice of profession? Or is it because of inheritance as well as differences such as the ability to access and profit from the stock market?

At a time when the country needs all of its people to focus on how they can contribute to nation-building, even as they find ways to upgrade their own standard of living and that of their loved ones, any wrongly communicated emphasis would create nothing but division that would return to roost in the long run.