Special Report: Paramount: From brick and mortar to digital disruptor 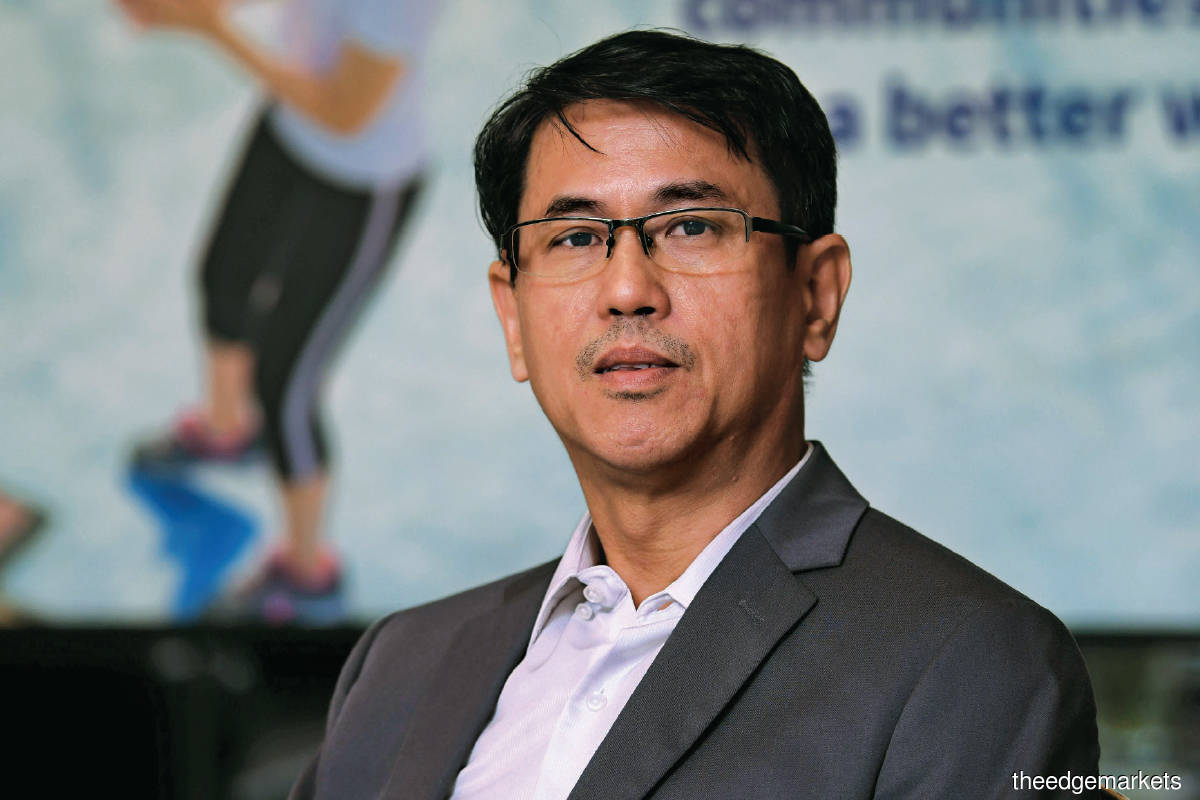 "If we cannot digitise [our businesses], we would be better off getting rid of them." — Chew (Sam Fong/The Edge)

OVER the past half a century, Paramount Corp Bhd made big strides. It started from its brick-and-mortar roots as a humble rice miller to become a listed property player with investments in education. Now, it has become a disruptor as it ventures into the fintech space.

The group recently announced its move to acquire a stake in Fundaztic, a peer-to-peer (P2P) lending platform, marking its first steps into digital finance, which may also pave the way for a possible digital banking venture.

To recap, Paramount is acquiring a 30% stake in special-purpose vehicle Omegaxis Sdn Bhd, which will own a 63.5% stake in Fundaztic operator Peoplender Sdn Bhd.

The investment, which will cost Paramount RM13.7 million, is a related party transaction. Its  CEO Jeffrey Chew owns 29.47% in ordinary shares and 37.39% in redeemable convertible cumulative preference shares in P2P Venture Sdn Bhd, as well as indirect equity interests in Omegaxis, Peoplender and Fundaztic SG Pte Ltd by virtue of P2P Venture’s interest in these companies.

Meanwhile, chairman Datuk Teo Chiang Quan has an indirect 14.28% equity interest in Peoplender, by virtue of his son Benjamin Teo Jong Hian, who is also an executive director of Paramount.

The acquisition is in line with Paramount’s five-year strategic plan to identify new sources of earnings, with a focus on the digital space, following the divestment of its education business.

Chew says the group has always had entrepreneurship in its corporate DNA, and the move to digitise its existing operations as well as the exploration of other digital opportunities is a natural progression.

“We need to digitise the businesses we want to keep. If we cannot digitise them, we would be better off getting rid of them. For future investments, we believe digital is the way forward,” he tells The Edge.

He adds that was partly the reason behind the group’s divestment of its education business, as it was a challenge to digitise it.

The group retained an effective 20% stake in the pre-tertiary education business.

While the education investments are still profitable, Paramount was concerned about the growing trend of digital learning and what it would mean for the conventional method of learning in physical classes, amid the rising adoption of online learning platforms such as Coursera, Skillshare and Udemy.

Chew says it all boils down to the essence of education — the transfer of knowledge.

“We are not really building any­thing physical in the education business. It’s all about the transfer of information to the students. We are just training the students in class [which can be done digitally],” he explains.

Following the divestment, the board came up with five strategic options for Paramount — either to acquire a construction company for in-house works, invest in a real estate investment trust, venture into proptech (property technology), venture into the property financing space or set up an investment unit that would invest in multiple businesses.

It was decided that the group would invest up to RM100 million over the next five years in start-ups — preferably those in the digital space — which included its investment in OpenLearning Ltd, an Australian online education platform for tertiary education institutions listed on the Australian Securities Exchange, as well as in Fundaztic.

Chew says the decision to acquire an interest in Fundaztic was timely, ahead of Bank Negara Malaysia’s unveiling of the digital banking licensing framework on Dec 31 last year.

In a way, Fundaztic is already a fully digital bank, he says, as customers can apply for loans online from any location with internet access.

He says Fundaztic, being a regulated digital platform operator that has a good track record of nearly four years, would be able to strengthen Paramount’s application for the licence when the group eventually decides to submit it.

The central bank plans to award up to five licences and has set June 30 as its deadline for applications, with the winners to be decided by the first quarter of 2022.

While Paramount has expressed interest in the digital bank license, it has yet to make a final decision to apply for it, as this potential venture is being scrutinised by the board.

Among the factors being considered is whether the capital injection by Paramount into the venture will pose significant liquidity challenges to the group.

It has appointed KPMG to do a feasibility study on whether the venture would be viable, profitable and sustainable.

The group also has to rope in partners that can help implement its digital banking strategy and assist in obtaining the licence, and it is in advanced discussions with potential partners. These partners need to fulfil criteria such as having strong financial resources, a track record of operating a regulated digital platform, an existing customer base or the ability to provide technological support for potential products.

“Paramount currently fits into two categories. We can provide financial resources, as we are a listed company, and use funds from the divestment of the education business. We also have the education and property experience as our domain knowledge as well as existing customers that we can work with for potential products,” says Chew.

He adds that two parties have committed to being equity partners with Paramount so far, and the group is in discussions with a few more parties. It hopes to wrap up discussions within the month.

Asked why Paramount is so interested in the digital banking venture, Chew says it is a great opportunity.

He believes 40% to 60% of financial products being offered by the conventional banking industry will evolve over the next 10 to 20 years.

“The design of these products and the way they are being delivered, sold and serviced will change. They will be replaced [by new products]. The incumbents will have to decide whether to change the way they are doing business now to cater for the needs of the future,” he explains.

Some conventional banks have taken steps to future-proof themselves. Bank Islam, for example, has inked partnerships with digital players to transform itself into a fully digital bank.

On the other end of the spectrum, Citigroup Inc had last month said it would be exiting retail banking in Malaysia, along with 12 other markets in Asia, Europe, the Middle East and Africa, citing its lack of scale to compete in these markets.

Digitisation can really improve the efficiency of operations, says Chew, pointing out that a digital bank can get its cost-to-income ratio down to 20%.

For comparison, the cost-to-income ratio of conventional banks averages at 40% to 50% — about half of every ringgit earned in revenue goes into their gross profit.

The banking industry is still currently the most profitable in Malaysia, even though banks are encumbered by their physical branches as well as maintenance costs for its human-intensive operations and archaic processes.

“If a bank were to digitise everything, end to end, the costs would collapse significantly and it would achieve a much lower cost-to-income ratio. The industry today is already very profitable but, with digitisation, it will become even more profitable once you get to scale,” Chew says.

He witnessed this fact at the helm of OCBC Bank (Malaysia), as the bank managed to get its cost-to-income ratio to as low as 35% after putting new systems in place.

“If someone were to offer me the licence of a traditional bank, I would not take it. The costs involved are too high, unless they can digitise. I would be willing to get a digital bank licence because I would be digital from day one,” he says, adding that system costs will not rise, unlike human costs, which are subject to increments and bonuses.

Still, digitisation could become a very risky undertaking for conventional banks, especially those that have been around for decades, as they would need to modify significantly, if not do away with, their legacy systems, which have been built, patched and updated over many years.

If something goes wrong, Chew says, a bank risks corrupting its customers’ data in the system — an issue that a bank cannot take lightly.

The digital move is in line with Chew’s personal vision of how things will be in about three decades.

He envisions a world in which offices will no longer be occupied by humans but by computers, as well as the widespread use of digital personal assistants for booking appointments, completing paperwork, conducting investment advisory and performing basic tasks such as ordering food or making transport arrangements for a weekend hiking trip.

Chew also believes it will be a completely paperless world, and that “the only paper left would be art and toilet paper”.

“Our digital transformation journey starts with us digitising our processes under the property business. The pandemic has accelerated this — our sales process has gone digital, including signing agreements,” he says.

“That’s what we will continue to do, from sales to buying land to designing products and getting approvals from the authorities — everything will eventually be digital over the next five to 10 years.”

Despite its digital push towards fintech and edutech, property will remain its core business, Chew says, at least for that time frame.

Paramount’s property division revenues have been able to fill the hole left by the divested education segment, with the group to continue with land banking and development in the medium term.

For its financial year ended Dec 31, 2020, the group reported net profit of RM502.7 million, which included a one-off gain of RM462.7 million from the divestment of the pre-tertiary education business. Excluding the gain, its net profit would have been RM40 million compared with RM119 million in FY2019, owing to the hit from the pandemic. Nevertheless, Paramount’s property sales in FY2020 exceeded FY2019.

Chew is unsure, however, whether property will still be Paramount’s major contributor 30 years from now.

“We will probably still build houses; people will always need a place to live in. They cannot live in a vacuum in the digital space; they will still need somewhere to physically sleep at night. In that context, we think property will be around for a while,” he says.