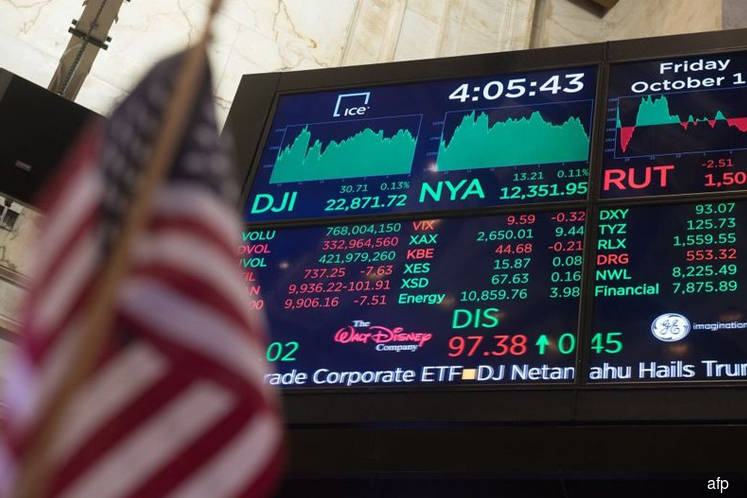 NEW YORK (July 17): The S&P 500 ended slightly lower on Monday following a drop in oil prices that weighed on energy shares and offset a jump in financials as Bank of America's results reinforced expectations of a strong U.S. earnings season.

Netflix shares ended the session up 1.2 percent but dropped more than 14 percent after the bell when it reported results. The company missed Wall Street forecasts for U.S. and international subscribers.

Nasdaq e-mini futures volume jumped after Netflix's results and sold off sharply to end the session down 1 percent.

Facebook, Amazon.com and Google parent Alphabet - the other 'FANG' stocks - were down more than 1 percent in after-hours trading. The stocks have led the technology and consumer discretionary sectors back to record-high levels in recent days.

During the regular session, the S&P energy sector fell 1.2 percent, leading percentage declines among the 11 major S&P sectors. Shares of Exxon Mobil slid 1.0 percent and Chevron fell 0.9 percent. The stocks were among the biggest drags on the benchmark index, along with Microsoft , down 0.5 percent.

Bank of America rose 4.3 percent after the lender's quarterly profit beat analysts' expectations on lower expenses and growth in loans and deposits. Goldman Sachs shares were up 2.2 percent ahead of its results, due Tuesday.

That wasn't enough to extend recent gains in the S&P 500, which on Friday had its highest close in more than five months.

Investors may be reluctant to make big trades ahead of the pickup in earnings reports this week and Federal Reserve Chairman Jerome Powell's first congressional testimony Tuesday and Wednesday, said Paul Nolte, portfolio manager at Kingsview Asset Management in Chicago.

"We're taking a bit of a break after a good run last week," he said.

Sixty S&P 500 companies were due to report this week.

Analysts have forecast second-quarter earnings increased 21.1 percent from a year ago according to Thomson Reuters data.

Of the companies that have reported earnings through last week, 86.7 percent have topped earnings expectations, above the 75-percent average of the past four quarters.

Among stocks, shares of Arconic jumped 10.5 percent on a report that the maker of aluminum parts used in planes, cars and buildings is the subject of takeover interest from private-equity firms.

Amazon.com Inc edged up 0.5 percent as its 'Prime Day' shopping event kicked off.

Declining issues outnumbered advancing ones on the NYSE by a 2.05-to-1 ratio; on Nasdaq, a 1.55-to-1 ratio favored decliners.

Trading volume was light, with about 5.4 billion shares changing hands on U.S. exchanges. That compares with the 6.6 billion daily average for the past 20 trading days, according to Thomson Reuters data.