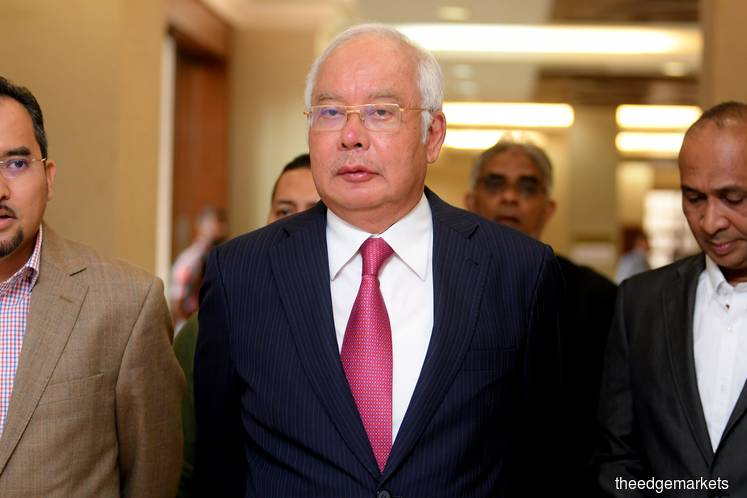 KUALA LUMPUR (Aug 1): Datuk Seri Najib Razak's lawyer Tan Sri Muhammad Shafee Abdullah told the High Court here today that they are seeking to strike out the notice by the prosecution compelling the former premier to apologise to the court over two Facebook postings he made about the SRC International Sdn Bhd trial.

Shafee said they would put in an application to strike out the notice and an affidavit in support of the application by Monday (Aug 5).

The senior lawyer told this to Justice Mohd Nazlan Mohd Ghazali while the matter regarding the notice filed by the prosecution came up for case management during a short break in proceedings.

Earlier, Attorney-General (AG) Tommy Thomas informed the court that it had filed the notice dated last Thursday and wanted the court to fix a date for the exchange of affidavits to the matter.

While Shafee asked that the hearing to strike out the notice is fixed on Thursday (Aug 8), Thomas asked for more time to possibly reply to the affidavit to the striking out application.

"I assure that the matter would be disposed of within 14 days but we may need time to reply to the affidavit and since all of us are busy involved in the trial, I suggest that seven days are given to reply," the AG said.

Thomas suggested to Justice Nazlan that case management to fix a hearing date on the matter be held on Monday.

It was reported last Friday that the prosecution had filed a formal written application wanting the former premier to apologise for the two Facebook postings made on July 15 and 17 where he defended his multi-million ringgit purchases of jewellery in Italy in August 2014 and a Chanel watch on Dec 22, 2014 made with his credit card.

The prosecution wants the former prime minister to apologise for the two postings, and the court to issue an order prohibiting Najib from making further postings about the case and for the existing postings to be removed.

Deputy Public Prosecutor (DPP) Muhammad Izzat Fauzan affirmed an affidavit in support of the application dated July 25, where he said the public prosecutor brought to the court's attention the postings made by the former premier.

The prosecution had called AmBank's vice president Yeoh Eng Leng to testify as the 47th prosecution witness to give evidence on July 15 regarding the credit card purchase, said the DPP.

"The Public Prosecutor [AG] submitted that the act by Najib of commenting on the evidence is sub-judice and that the respondent [Najib] can put forward his version of events in the court of law if he is called to enter his defence and decide to take the stand.

"Subsequently, the learned Public Prosecutor requested that the respondent to personally and unequivocally to apologise to court and secondly undertake that such conduct will not be repeated," Izzat added in the affirmed affidavit in wanting the former premier to apologise.

Thomas also told the court that he applied for the SRC trial to resume at 2pm on Monday (Aug 5) after both the prosecution and defence appealed against High Court judge Collin Lawrence Sequerah's decision to start the 1Malaysia Development Bhd trial on Aug 19.

"I don't think it is wise to fix for the trial to resume at 10am or 11am as the appellate court is in Putrajaya. If the High Court allows for the case to resume at 9am then we can persuade the Court of Appeal to hear our application first at 9am," the AG said.

Justice Nazlan then agreed for the case to start at 2pm on Monday.

It was previously reported on July 19 that Justice Sequerah had twice rejected the prosecution's request to postpone the 1MDB trial or what is called the Tanore case and fixed the trial to start on Aug 19 after postponing it three times.