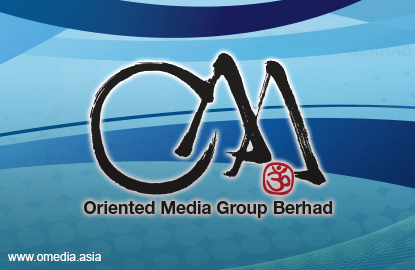 KUALA LUMPUR (Dec 15): Oriented Media Group Bhd (OMedia), which recently made its first quarterly profit in over six years, saw 9.05 million or 4.24% of its shares traded off-market today for RM3.48 million or 38.5 sen per share.

Bloomberg data showed a block of OMedia shares were traded at 3:23 pm today.

The OMedia shares sold off-market today, were valued the same as yesterday’s (Dec 14's) closing price of 38.5 sen. Today, the counter gained half a sen or 1.3% to 39 sen, bringing its market capitalisation to RM83.26 million.

Bloomberg data does not provide the list of buyers and sellers off market. OMedia’s latest annual report for the fiscal year ended Jun 30, 2015 (FY15) showed all the shareholders with a stake greater than the amount of shares transacted today, were held in trustee accounts.

Also, only two out of six OMedia board members own shares in the company. Newly-appointed Chairman Yee Yit Yang had direct ownership of 500,000 OMedia shares as at Nov 3, or equivalent to a 0.23% stake.

Executive director Zhu Guohe, a Chinese, owned 8.33% of the company, through Sure Bright Investment Development Ltd.

Oriented Media, which carried accumulated losses worth RM20.78 million in its books, was pushed to an all-time high of 63.5 sen on Nov 25, which came around the time it announced a net profit of RM3,000 for its 1QFY16. This was the first quarterly net profit that OMedia drew since 4QFY09, where it made RM107,000.

In the notes accompanying 1QFY16 financials, OMedia said it turned around from a loss of RM13,000 last year, thanks to its e-commerce business in China.