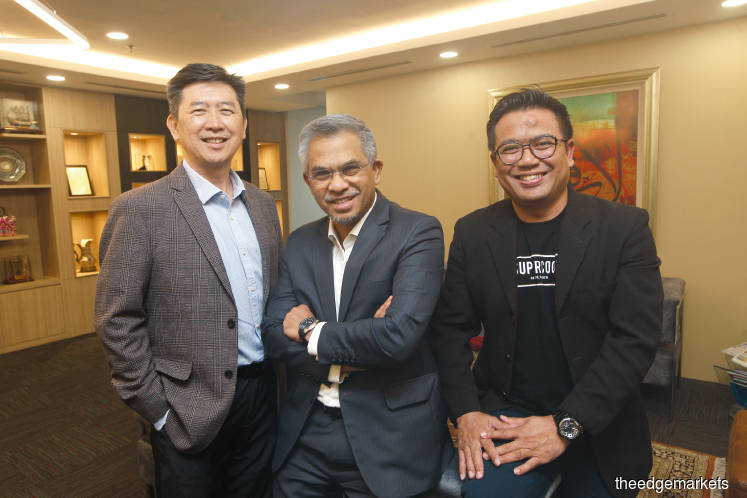 Equity investors typically comb through a lot of news and analyst reports in their search for good stocks to buy. In the future, artificial intelligence-powered solutions could help them speed up the process.

That is because AI solutions are able to gather both qualitative and quantitative information from a wide variety of sources and analyse it in a short period of time. This would benefit retail investors in particular, who lack the resources and expertise of professional investors,  says MyFinB (M) Sdn Bhd founder and president Muhammad Nazri Muhd.

“We have to level the playing field between retail and institutional investors. The latter have Bloomberg terminals and access to live information, whereas retail investors do not,” says Nazri, whose company created an AI-powered analytical tool that can help investors in 2018.

Prior to launching MyFinB, he was assistant manager at Citigroup Asset Management, regional fixed income analyst at Prudential Asset Management and associate director (financial institutions) at Fitch Ratings in Singapore, among others.

“When I was a fresh graduate working in the asset management industry, I saw these hotshot fund managers connecting the dots and taking positions very quickly. They seemed to be able to understand balance sheets and news flows rapidly and make million-dollar decisions on whether to overweight or underweight a particular stock or bond. It made me wonder, to what extent would my education help me think so quickly like that? Then, I realised that you would have to accumulate many years of experience to do that,” says Nazri.

But what if he could use technology to accelerate the process? AI could be used to analyse the potential and health of companies, as well as the best time to make investments, he thought. This led him to start MyFinB. The company has proprietary AI-powered tools that pull qualitative and quantitative information from public sources and churn out detailed analyses, forecasts and recommendations.

“We wanted to create a powerful tool for people who may not be equipped with financial knowledge to interpret [data] and make use of the financial data meaningfully. Hence, we use AI to augment the ability of humans [to make it seem] as if they have gone through 10 to 15 years of financial education. Then, they are able to see any gaps in a company, what causes certain trends to occur and any unexpected things that could happen to a company,” says Nazri.

He foresees investors being armed with such tools in the future as information is widely available and speed is paramount in the investing world. “We have been invited by several fund management houses to see how the system can be embedded in their investment processes. They are beginning to see the value of speedy and accurate analysis, as opposed to doing your own analysis,” he says.

“The world is changing so fast. You have to keep up. You cannot be slower than your peers.”

MyFinB’s technology is able to analyse the financial performance of listed and unlisted companies around the world, identify their strengths and weaknesses and anticipate the direction they are headed in.

other sources. The system acts like a robot analyst, except that it does not make “buy” or “sell” recommendations.

“Imagine if there were 100 companies to analyse. How long would it take for humans to form a prognosis about these companies? It may take weeks, if not months. But with AI, you can generate the analysis within an hour,” says Nazri.

What is different about MyFinB’s offering is that it does not only look at historical financial data but also analyses non-financial information such as the personalities of the companies’ leaders and management actions, obtained via publicly available news reports. It benchmarks the leaders’ personalities and management actions against those of their peers and forms an opinion on what will happen to a company if the management does or does not do certain things, according to Nazri.

“AI is a very powerful predictor of human behaviour and management actions that impact stock prices. Our AI is not used to predict stock prices based on a quantitative model. Our model looks at the underlying fundamentals of the companies and observes how CEOs and top management react to particular circumstances. It then anticipates what will happen if they do certain things,” he says.

What about detecting fake news? Nazri says the system profiles the sources it draws from. For example, if a news portal is known to be pro-government, it will be tagged as such. This is taken into consideration when a report is generated.

“Does this platform replace humans? No. It provides analysts with insights, who can then zoom in on the relevant areas,” he says.

The system does not make any stock recommendations in its reports because MyFinB is not licensed to do so. However, it plans to obtain a digital investment management licence in the future, says Nazri.

“That will enable us to fully unleash the speed, independence and accuracy of utilising AI to make ‘buy’ and ‘sell’ calls for our clients, based on the fundamentals [of the stocks] and a value-based approach to investing.”

The company currently distributes a customised version of this report, called SITI (Stock Intelligence and Tracking Insights), to thousands of retail investors through Asri Ahmad Academy, a local retail investor education group. Individuals can subscribe to SITI on MyFinB’s website.

First, investors answer a questionnaire to determine their risk appetite and whether they are short-term traders or long-term investors. Then, the system generates a list of stocks that suit their risk appetite, based on the companies’ fundamentals.

“A detailed analysis of the shortlisted companies is automatically generated, covering areas such as how the businesses have performed, the shareholder value relative to the risks undertaken by the companies and key areas investors should be aware of going forward,” says Nazri.

For the purpose of evaluating non-listed companies and start-ups, MyFinB has made the system available for family offices, local and international banks, insurance bodies and regulators, such as the Malaysian Institute of Accountants, for the use of their members.

Muhammad Nazri Muhd, founder and president of MyFinB (M) Sdn Bhd, analysed several companies with his artificial intelligence-powered platform over the course of a year and came up with several interesting insights.

One of it came from a locally listed company that saw its share price drop drastically after the 14th general election in 2018. Nazri had produced a report on the company before the election and it showed that the company had a high concentration of risk due to its overreliance on government contracts.

“But back then [when I ran the report], analysts were still saying how good the stock was. The analysts’ language was to ‘buy’, ‘sell’ or ‘hold’. Our language was, ‘[the management] has to make sure it does certain things for the stock to do well again,’” he says.

As for another locally listed company, the system detected that it had too much debt and anticipated that the stock price would suffer unless management did something to resolve the issue. Fortunately, the company conducted a rights issue to raise funds and paid down the debt over the next few months.

In the case of a local private company, on which Nazri generated a report based on information obtained from the Companies Commission of Malaysia and other public sources, it was healthy but growth was flattening, costs were rising and management was too conservative.

“This was not good enough because the business would start to decline as the years went by due to competition. The report said if management wanted to increase the value of the company, it should consider a merger or acquisition,” he says.

True enough, the company was acquired by a global player a few months later.

One of the latest applications of MyFinB (M) Sdn Bhd’s artificial intelligence (AI) technology is a financial planning tool for parents of autistic children called Better Life, Optimisation of Money (Bloom). The tool was produced in collaboration with a researcher at Quest International University Perak.

“The cost of handling an autistic child is different [from a normal child] by at least 30% to 40%, due to the school they go to, the additional supplementary classes, treatments and intervention processes. How do you make sure you plan your finances well and get the right financial assistance?” says MyFinB founder and president Muhammad Nazri Muhd.

Bloom, which was soft launched last December, profiles parents’ financial behaviours and projects the financial needs of the family going forward. It also presents all the relevant information on autism and recommends financial planners and autism experts.

“It does not just analyse the financial and non-financial information to forecast the future but also identifies the gaps. We studied hundreds of articles and publications on the topic and we looked at the financial situations of such families,” says Nazri.

First, parents are interviewed to develop their profiles. Then, with their permission, the tool collects relevant information on them via social media. With this information, it is able to predict their financial behaviour.

“The tool takes into account your current situation and predicts the future by taking into account 100 variables related to psychological, behavioural, financial and non-financial data points. It finds out, for example, whether you will be in deficit in the next 5 to 10 years [due to your spending habits] as the stages of your life change. What is the likelihood of you getting into a financial challenge if you are chronically ill and how could that escalate?” says Nazri.

For now, Bloom is only available to financial planners. A simpler retail version for parents is still in the works.