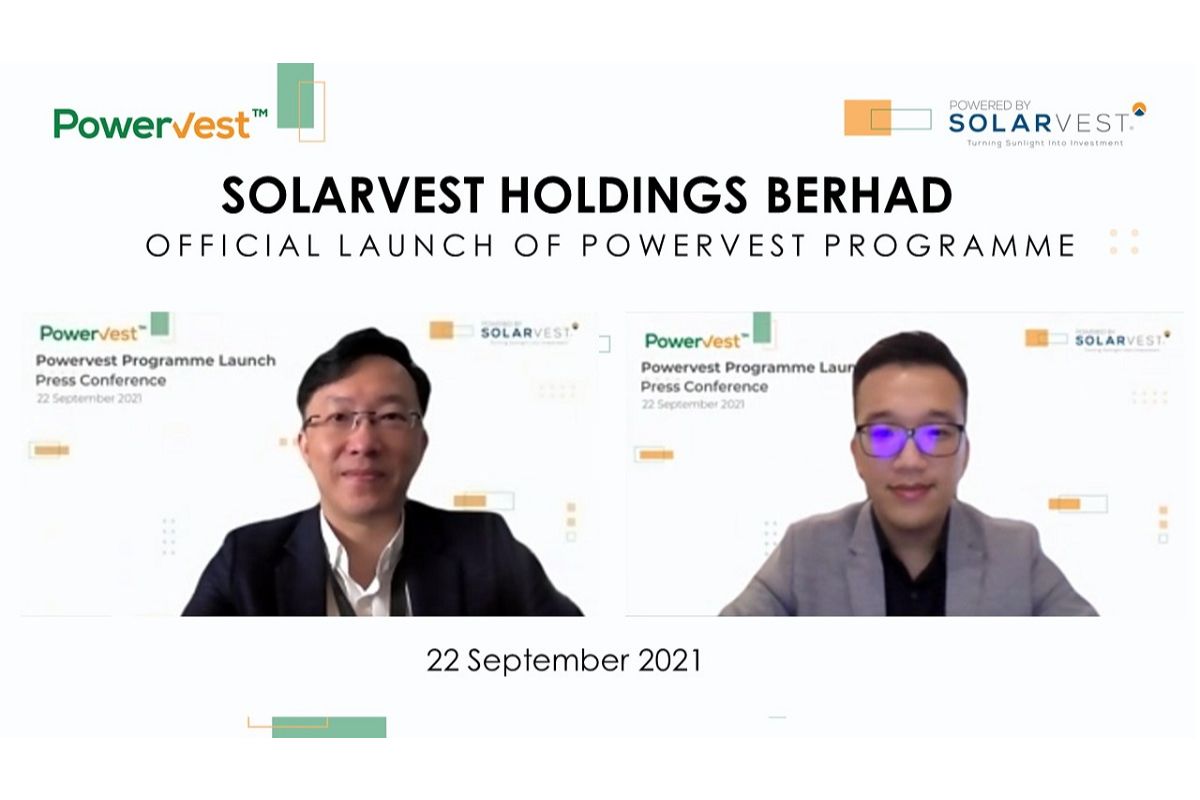 KUALA LUMPUR (Sept 22): Solarvest Holdings Bhd is planning further diversification in the solar energy business as the clean energy specialist seeks to grow in the midst of prolonged uncertainty.

Its group chief executive officer Davis Chong said this includes moving more aggressively into solar energy investments that Solarvest is working on as well as leveraging Powervest, its all-new solar financing programme, which will strengthen its position in the solar energy market.

“Continuing the explorations into large-scale solar (LSS) farm projects will probably strengthen our position as well, and to work in Vietnam, the Philippines and Taiwan markets in asset ownership are also one of the things.

“But we are [also] looking into further involvement in the clean energy value chain that will give more space for Solarvest to expand,” he said at a virtual press conference on Wednesday.

Chong noted that Solarvest has a strategic plan on how it is going to be involved in different value chains in clear energy distribution but is unable to elaborate further.

“That is what we are working on but I can't reveal right now because it is a strategic plan for the group. [However], you would see after this where the diversifications that we are planning in the clean energy industry [are],” he said.

Looking ahead, Chong said the outlook for the solar photovoltaic (PV) industry in Malaysia remains optimistic given that the government is committed to supporting the growth of the PV solar industry, where renewable energy is targeted to contribute 31% to the national capacity mix by 2025.

“We don't see any issue on the market growth for up to 2025. [Also], we see the next LSS is coming and we see the Net Energy Metering (NEM) 3.0 takeup rate is so encouraging.

“[However], a little bit of an issue that we are talking to the new government [about] right now is what is the next NEM program that we are looking forward to. I do believe they are in a plan to replenish the rooftop NEM program or come up with something different that would continue to grow for the solar rooftop industry in Malaysia,” he said.

According to Chong, Solarvest’s current outstanding orderbook stood at about RM583 million in Malaysia, comprising the LSS (RM371 million), and commercial and industrial (RM212 million) projects.

He added that the group was tendering between RM400 million and RM500 million work of projects in the pipeline domestically for the commercial and industrial project, prior to the launch of the Powervest programme.

“We expect to close about RM200 million worth of deals annually. We also have expansion plans in Taiwan, Vietnam, and the Philippines,” he said, adding that the group has over RM1 billion worth of tenderbook.

Chong said Solarvest also targeted about 20MW to 30MW installation per year and it could reach up to 100MW for the solar rooftop market in Malaysia. However, he said this would depend on the government’s policy and the tariff as the company continues to invest in different markets for both commercial and industrial segments.

On updates of Solarvest’s overseas regional businesses, namely in Taiwan, the Philippines and Vietnam, Chong said operation setups were delayed due to the pandemic.

Notwithstanding that, Chong noted Solarvest is exploring utility and sport market projects in the Philippines.  As for Taiwan, Chong said Solarvest is building more pipelines right now with the local partners on which it will be announcing some developments in the very near term and this goes the same with Vietnam.

“The pandemic is slowing us down for the overseas expansion activities but fortunately, the domestic market with the LSS programme has been encouraging and it keeps us busy for the moment despite the international constraint for regional expansion... before we go back to the normal business expansion plan that we targeted [earlier],” he said.

Chong foresees the group’s regional expansion to get back on track next year for Taiwan, while there will be some progress in the Philippines and Vietnam at the end of 2022.

Meanwhile, Solarvest expects to gradually garner about 30% of the group’s recurring income from owning the solar assets and other contracts with different programmes within three to five years.

“30% of recurring income includes LSS, corporate leasing via the programmes. Currently, the contribution to the group is negligible and the increase will only come once the LSS project comes on stream by 2023,” he said.

Solarvest's share price closed unchanged at RM1.29 on Wednesday, valuing the group at RM856.5 million. In the past one year, the stock has risen by 65.38%.