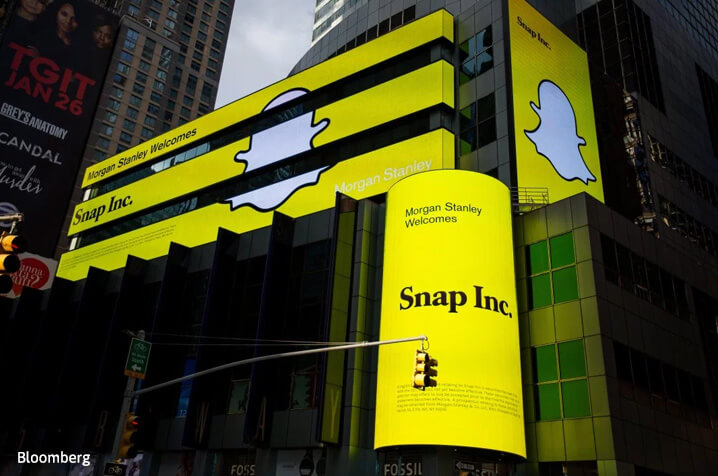 (March 2): Snap Inc, maker of the disappearing photo app that relies upon the fickle favor of millennials, is going public at a valuation at least twice as expensive as Facebook Inc, and four times more costly than Twitter Inc.

Shares of the Los Angeles-based company will start trading Thursday on the New York Stock Exchange under the ticker SNAP. Chief Executive Officer Evan Spiegel is expected to be on the exchange’s floor for the open, with co-founder Bobby Murphy and Imran Khan, Snap’s chief strategy officer, also likely to make an appearance.

Snap sold 200 million shares in its initial public offering at US$17 each, according to a statement Wednesday. At that price, it has a market value of about US$20 billion, based on 1.16 billion shares outstanding after the IPO. That implies a multiple of about 21.4 times EMarketer’s estimate for Snap’s 2017 advertising sales.

It’s a “nosebleed” valuation, but “there’s a nosebleed’s worth of demand,” said David Kirkpatrick, chief executive officer of Techonomy Media.

Snap raised US$3.4 billion in its IPO, pricing shares above the marketed range, in the biggest social-media IPO since Twitter more than three years ago. It’s also the first tech company to list in the US this year.

“There is a huge amount of people who really just want to get in on the hot new thing, who see this as the first opportunity of its type in a number of years,” Kirkpatrick said in an interview on Bloomberg TV. Still, “they’ve got some serious work to do to actually make a real business that makes profits.”

The company also needs to convince investors to put their complete trust in its management: It’s listing non-voting shares, the first company to do so in the US, according to its deal filing. That means stockholders will have no sway over things like director nominations and executive compensation, and they won’t be able to bring matters before the annual meeting. Co-founders and majority holders Spiegel and Murphy will be responsible for the decisions that lead to Snap’s success — or on the hook for its mistakes.

The trading debut may benefit from good timing: US equities set records Wednesday on the heaviest trading volume so far this year. The S&P 500 Index jumped 1.4% to a record 2,395.96 in New York, the biggest single-day advance since the election. The Dow Jones Industrial Average climbed 303 points to 21,115.

Snap, which posted a net loss last year of US$515 million, even as revenue climbed almost sevenfold, has some things to prove. It needs to continue to increase revenue per user, address slower user growth — which fell below 50% in the fourth quarter for the first time since at least 2014 — and inch closer to profitability.

Its advertising model is still evolving, with many brands using the platform to experiment with one-off campaigns before committing to longer term spending. While the advertising business has been built up from nothing in about two years, advertisers have said that the ad-buying process is still overly complicated. They’re also concerned about only being able to access a narrow demographic through Snap — it’s core user group of teens and twenty-somethings.

Facebook, with about 1.2 billion active daily users on its flagship platform and 1.2 billion on its messaging tool WhatsApp, trades at a multiple of about 10.5 times revenue estimates for this year. Facebook’s Instagram introduced a video-reel feature — similar to Snapchat’s stories — that already has 150 million daily users. That’s in line with Snap’s daily active count of about 158 million.

Facebook priced shares in its IP0 at the top end of the proposed range in May 2012, then following a first-day trading technology glitch the stock climbed less than 1% and languished for more than a year. Once the company’s strategy of betting on mobile software started to pay off and revenue and profit exceeded estimates, it surged, and Facebook now has a market valuation of about US$397 billion.

Twitter, with more than 300 million monthly active users, comes in at 4.8 times projected revenue. The social media site had an impressive debut, then proceeded to stumble as user growth slowed.

Snap faces what those companies faced, with one proven product to date under its belt.

Including unexercised stock options and other convertibles for a total of 1.39 billion fully diluted shares, Snap would have a fully diluted value of about US$23.6 billion, according to a person with knowledge of the matter, who asked not to be identified because the information is private.

Given the interest, Snap could have priced the shares at US$19 each, the person said, but executives wanted to ensure that shares would make a decent gain in their debut.