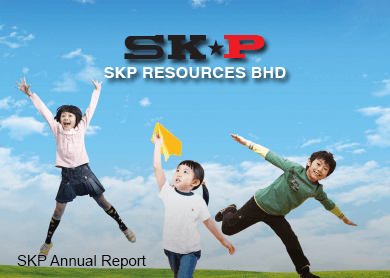 SKP Resources Bhd
(Aug 4, RM1.43)
Downgrade from buy to neutral with a target price of RM1.57: We recently visited SKP Resources Bhd’s  new production facility in Johor and are happy to note that planned production may commence a month early, in September. The slated production of Dyson’s cordless vacuum cleaners is to occupy approximately 20% of floor space at the new plant. Accordingly, the remaining floor space has the potential to more than triple the company’s current production of Dyson items, as it would be facilitated by 16 additional production lines.

We lift our earnings estimates by 12%/32%/31% for financial years ending March 31, 2016/2017/2018 (FY16/FY17/FY18) on the following: i) at end-2014, Dyson announced a four-year capital expenditure of £1.5 billion or RM9.02 billion (£1 billion for research and development [R&D]) and projects to develop four new ranges of technology — there is also a plan to launch 100 new products over the next four years, ii) a greater percentage win of Dyson’s contracts due to SKP’s commitment to provide available capacity — this consequently allows it to be more operationally competitive as it takes steps to cater for future orders and iii) earlier recognition of earnings as production is due to commence earlier than expected.

Key risks to our forecasts include growth that is in tandem with key customer Dyson’s future prospects and a weaker-than-expected global macroeconomic environment, which could dampen demand for consumer products. SKP practises a cost pass-through on its US dollar exposure and raw material cost with its clients each month.

Although SKP’s earnings growth remains highly intact with a three-year compound annual growth rate of 62%, the recent impressive 78.7% surge in its share price has capped the upside to our TP to 4%. Therefore, we downgrade the stock to “neutral” (from buy), but lift our sum-of-parts-based TP to RM1.57 (from RM1.18) with an implied 2016 price-earnings ratio of 12.9 times. — RHB Research, Aug 4 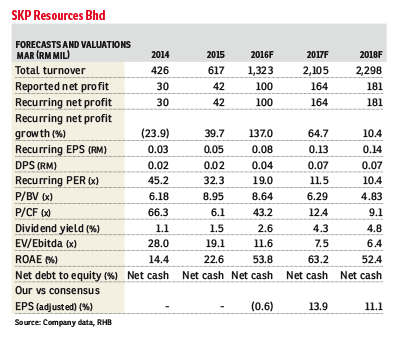