Six 7-Series not bought by govt, but provided by BMW 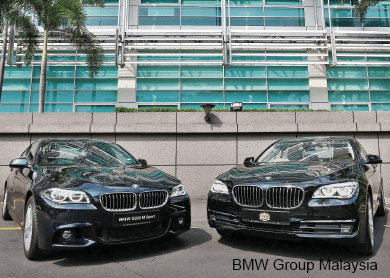 KUALA LUMPUR: BMW Group Malaysia has clarified that the federal government did not purchase the six new BMW 7-Series as what could have been asserted by PKR Pandan Member of Parliament Rafizi Ramli.

In a statement yesterday, its managing director and chief executive officer Alan Harris said the cars mentioned and photographed have not been purchased by Putrajaya.

“The cars are part of BMW Group Malaysia’s commitment as the automotive partner of the upcoming 26th Asean Summit taking place in Kuala Lumpur and Langkawi from April 24 to 28, 2015,” he said.

He added that the group will be providing a fleet of BMW 7-Series and BMW 5-Series, which will be utilised for ferrying all dignitaries, officials and VIPs for Southeast Asia’s meeting later this month.

In the Parliament yesterday, Rafizi asked whether the federal government had purchased six new BMW 7-Series cars, with the national crest affixed to each of the cars’ registration plate. The cars were spotted outside a local BMW dealership in Puchong, he said.

“The purchases were inappropriate as they came at a time when the country is tightening its belt over the recently-enforced goods and services tax,” Rafizi said.

He added that the price of each car was at least RM500,000, and that the total cost of the six vehicles would be RM4 million.