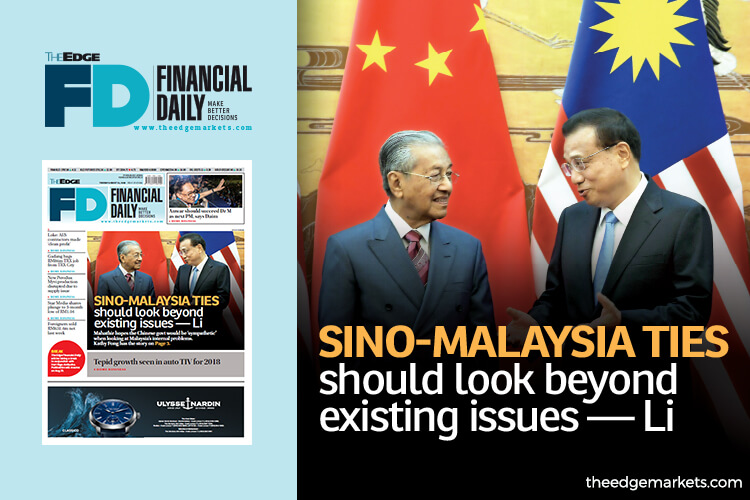 BEIJING: Judging by the smiles on the faces of the two leaders — Tun Dr Mahathir Mohamad and China Premier Li Keqiang — when they met the media yesterday, the official dialogue between the two countries seemed to have gone well in the Great Hall of the People here.

However, during the media briefing neither Dr Mahathir nor Li mentioned any new developments on the suspended mega infrastructure projects, of which Chinese state-owned enterprises are involved — an issue that had earlier resulted in a colder relationship between the two countries.

The intention to retain friendly Sino-Malaysia diplomatic ties and enhance bilateral trade has put the two leaders on common ground. Both Li and Dr Mahathir have reiterated their views on the importance of long-term diplomatic ties between the two countries at the joint press conference after the dialogue.

Li stressed that friendly long-term diplomatic ties should look beyond existing issues facing the two nations. And that China is ready to buy more agriculture products and palm oil from Malaysia.

On top of that, the common belief in free global trade has brought the two leaders closer at a time when trade tensions between the US and China are escalating.

The signing of five memoranda of understanding (MoUs) after the official dialogue yesterday was also a sign of the continuation of the Sino-Malaysia ties moving forward.

Dr Mahathir started the dialogue with an assurance that Malaysia wants to have long-term diplomatic ties with China, setting a warmer atmosphere in the Dong Dai hall where the official meeting was held in the Great Hall of the People. He reaffirmed that such a stance had never changed since he was the prime minister previously from 1981 to 2003.

“This is my eighth visit to China … I am here now; we would be able to understand the issues [that each other faces] better and this will yield good results [for the diplomatic ties]," said Dr Mahathir in the first few minutes of the dialogue.

“There are periods of ups and down on [bilateral] relationship between China and Malaysia. When I was the prime minister for 22 years, I had upgraded the diplomatic relationship. I am back now; I will work on it further,” he added.

Speaking at a joint press conference later, Li raised his concern about trade protection. He pointed out that any protection would not only hurt the two economies involved but would also have repercussions on other countries.

Dr Mahathir shared the same view on promoting global free trade, but added that it must be fair. Otherwise, it will become a new form of colonialism and the poor countries would lose in such free trade.

Dr Mahathir also urged the Chinese government to be “sympathetic” when looking at the problems that Malaysia is currently having, including the internal fiscal problem. “We hope also to get China to understand the problems being faced by Malaysia today,” said Dr Mahathir at the joint press conference with Li.

“And I believe that China will look sympathetically towards the problems that we have to resolve and perhaps help us to resolve some of our internal fiscal problems,” he said.

Dr Mahathir indicated that strong inflow of investments from China would help to create jobs and resolve the unemployment problem in Malaysia. He urged Chinese companies to set up their hubs in Malaysia.

“There are many things that we could learn from China, for example, the innovations and technologies that China has that could be applied in Malaysia,” said Dr Mahathir.

He reiterated that Malaysia never wants to have confrontation with any country, noting that the nation has always established diplomatic ties with other countries irrespective of its ideology, while referring to the Sino-Malaysia relationship that had started back in 1974.

“Malaysia is a trading nation. China’s large population is something that Malaysia wants,” said Dr Mahathir.

On the other side of the table, Li announced that China is “ready” to import more of Malaysia’s competitive goods that meet Chinese consumers’ demand. Palm oil products and unique agriculture produce are among the items to be considered.

“China is ready to scale up the bilateral trades [between the two countries], to increase the size of trade and to make sure [there is a] greater balanced bilateral trade relationship,” Li added.

Meanwhile, several MoUs were signed yesterday including one by the agriculture ministry on the protocol of inspection and quarantine requirements for the export of frozen durian from Malaysia to China with China’s Administration of Customs.

The Malaysian Palm Oil Board also signed an MoU on technology development and promotion of Malaysian palm biofuel in China, while the Malaysian Rubber Board inked an MoU on collaboration in the areas of rubberised bitumen road technology and rubber tapping automation and mechanisation.