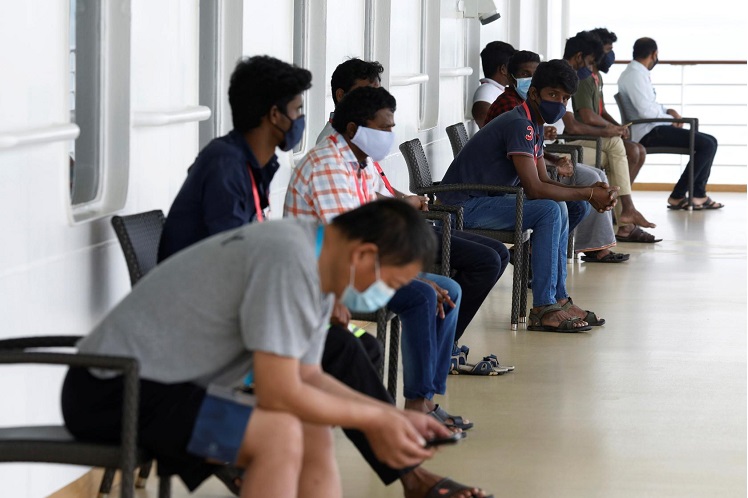 Migrant workers sit at a designated outdoor area onboard the SuperStar Gemini cruise ship which is being used as a temporary accommodation facility for migrant workers who had recovered from Covid-19, amid the Covid-19 outbreak in Singapore, May 23, 2020. (Photo by Reuters)

SINGAPORE (May 25): Singapore has preliminarily confirmed an additional 344 Covid-19 cases as of noon today, bringing the total to 31,960 with the number of patients recovering as of Sunday being 14,876.

The data on new cases showed that only four were Singaporeans or permanent residents while the vast majority constitutes migrant workers at dormitories, said the republic’s Ministry of Health (MOH) in a statement here.

"The lower number of cases today is partly due to fewer tests being conducted," said the ministry, adding that it is still working through the details of the cases and further updates would be shared later today.

As of yesterday, 690 confirmed cases remained hospitalised with eight in critical condition in the intensive care unit while 23 have died.

The ministry said 16,027 who have mild symptoms, or are clinically well but still tested positive for Covid-19, have been isolated and cared for at community facilities.

As there have been no more cases linked to Strand Hotel at Bencoolen Street for the past two incubation periods, the cluster has now been closed.

No new cluster was identified yesterday while the republic's largest cluster, S11 Dormitory @ Punggol, has a total of 2,679 confirmed cases now.