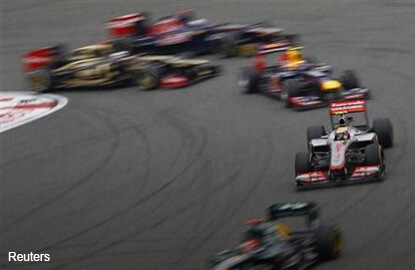 (Feb 15): Singapore is still interested in hosting the Formula One race if the terms are right, and discussions on keeping the event in the Southeast Asian nation are under way, according to the Singapore Tourism Board.

"I think the event is still a good one and I think it’s something we’re interested to look at provided the terms and conditions are right," Lionel Yeo, chief executive officer at Singapore Tourism Board, told Bloomberg Television’s Haslinda Amin Tuesday, when asked if hosting the event makes sense. “The discussions are still ongoing."

Then-Formula One head honcho Bernie Ecclestone suggested the Singapore Grand Prix wouldn’t be extended when the five-year deal expires this year, Today newspaper reported in November, citing an interview with German magazine Auto Motor Und Sport. The F1 has since been taken over by Liberty Media Corp.

"We should move away from the mindset that the F1 should be here just so we can bring in a certain number of tourists every year," said Irvin Seah, a senior economist at DBS Group Holdings Ltd. "You must look beyond the numbers. It’s about the branding, overall image of Singapore in the global tourism landscape."

After a record year which saw 16.4 million visitors spend S$24.8 billion in the city-state, Singapore is now forecasting slower growth in tourist arrivals this year due to economic and political uncertainty as well as stiffer regional competition.

“We want to temper our expectations because we are fully cognizant of the fact that there are political and economic uncertainties which may have an impact on outbound travel,” Yeo said at a briefing Tuesday.

The tourism board said it relies on extensive marketing campaigns and special events to lure visitors from abroad. Besides partnerships with media portals like Tencent and Youku in China, the introduction of the Michelin Guide Singapore as well as events such as the inaugural HSBC World Rugby Sevens Series have also burnished the city-state’s allure as a travel destination.

Like fellow F1 host countries Bahrain, Russia and Azerbaijan, Singapore has turned the race into a branding opportunity by drawing millions of television viewers around the world. The city is the first to host a night-time Grand Prix and the sporting event also draws entertainers such as Beyonce and Mariah Carey to perform at its sidelines.

With visitor arrivals expected to grow between zero and 2% this year after 2016’s 7.7% expansion, the tourism board says it is planning to revamp Singapore’s main shopping belt Orchard Road and add more family-friendly attractions to tourist offerings.

Boosted by visitors from China, India and Indonesia, tourism has been a bright spot in an economy hit by a global trade slump. Tourism makes up about 4% of Singapore’s gross domestic product and has grown since the opening of two casino resorts in 2010.

Genting Singapore, which runs one of the two casinos, saw its shares rise to their highest in two months on Wednesday on news of the country’s record tourism receipts last year.

Tourism receipts are expected to rise one to four percent this year to as much as S$25.8 billion.