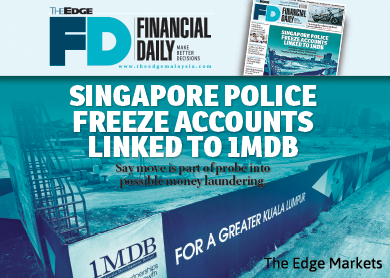 KUALA LUMPUR: The Singapore Police Force has frozen two bank accounts in relation to the ongoing investigation into the affairs of debt-laden 1Malaysia Development Bhd (1MDB), according to a report by Singapore’s The Straits Times.

The report quoted a statement released by the Singapore police as saying that they are investigating alleged money laundering offences linked to the accounts.

“On July 15, 2015, we issued orders under the Criminal Procedure Code to prohibit any dealings in respect of money in two bank accounts that are relevant to the investigation,” the Singapore police said in the statement.

“We understand that the Malaysian authorities have launched investigations into certain matters related to 1MDB. Singapore will continue to provide our full assistance and share information with the relevant authorities in Malaysia, within the ambit of our laws and international obligations,” The Straits Times reported the Singapore police as saying.

The Straits Times added that the Monetary Authority of Singapore (MAS) is also in close contact with the relevant financial institutions.

Earlier this year, MAS said it was in touch with the Malaysian regulators, after Putrajaya said 1MDB had redeemed US$1.1 billion (RM4.17 billion) from the Cayman Islands and parked it in the Singapore unit of Swiss private bank BSI.

According to a Reuters report yesterday, MAS is looking into whether banks followed rules on properly identifying customers and their sources of funds, and on reporting suspicious transactions.

The newswire added that the Singapore police did not identify the banks or the accounts in question because the investigation is continuing.

Reuters also noted that the move by the Singapore police is the first time accounts outside of Malaysia have been frozen in connection with the investigation.

The freezing of the Singapore bank accounts follows a similar move by the special task force investigating 1MDB’s funds in Malaysia on July 7, which had frozen six bank accounts, following a Wall Street Journal (WSJ) report that nearly US$700 million had been transferred into an account of Prime Minister Datuk Seri Najib Razak.

The special task force then said it had frozen six bank accounts in relation to the allegations, but it did not specify whose accounts they were or the banks involved.

The WSJ reported that investigators probing debt-laden 1MDB had traced nearly US$700 million to bank accounts they believed belonged to the prime minister.

Najib has since denied taking any money from 1MDB or any other entity for personal gain, and that his legal team has said it was considering taking legal action against the WSJ, after the newspaper reiterated that it stood by its report that millions of ringgit had gone into the prime minister’s personal bank accounts.

Even before the WSJ report, 1MDB had been the subject of separate investigations by Bank Negara Malaysia, the Auditor-General, police and Parliament’s Public Accounts Committee.

The affairs of 1MDB, which has raked up debts of up to RM42 billion, have become a matter of national and international scrutiny, and have been the subject of criticism from, most notably, former prime minister Tun Dr Mahathir Mohamad, as well as opposition lawmakers Tony Pua Kiam Wee and Mohd Rafizi Ramli.

Meanwhile, as part of the investigation, two people have been arrested this week.

On Monday, The Edge Financial Daily published a four-page story detailing how 1MDB and PetroSaudi International Ltd, an oil exploration and production company founded in 2005 by Tarek Essam Ahmad Obaid, conspired to cheat Malaysia of US$1.83 billion.

In an article issued on Tuesday, the business daily stressed that it stood by what it had published, after the state-owned strategic investment fund denied the claims, adding that The Edge had “recycled ... old and unproven allegations”.