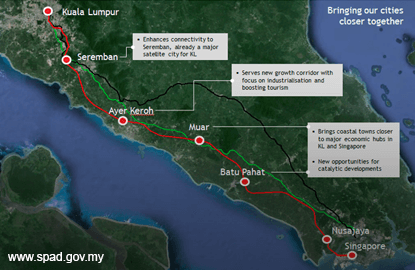 KUALA LUMPUR (Jan 5): The Singaporean Transport Ministry asserted today that both the Singaporean and Malaysian governments are still discussing the commercial and operating models of the proposed high-speed rail (HSR) project that will link Malaysia and Singapore.

A news report in Singapore's The Straits Times, quoting a ministry spokesperson, said that both governments were discussing the possibility of having two services — a non-stop express service linking Malaysia and Singapore, and a transit service in several locations in between.

The spokesperson said the alignment between the two countries is also still under discussion, with the exact alignment to be finalised after the completion of detailed engineering studies, the report stated.

Both countries are studying the feedback gathered from a request-for-information exercise that concluded in December and will be used "to improve the project's commercial and operating models and procurement approach", the report added.

On Monday, The Edge Financial Daily reported that MyHSRCorp Sdn Bhd chief executive officer Mohd Nur Ismal Mohamed Kamal had said that both the Malaysian and Singaporean governments had reached a consensus on the alignment of the 330km HSR project and the model of services.

Mohd Nur Ismal had said that one of the services would be a direct service linking Malaysia and Singapore while the other would be a transit service in Bandar Malaysia, Seremban, Melaka, Muar, Batu Pahat, Nusajaya and Singapore.

MyHSR Corp, which is wholly-owned by the Finance Ministry, was given the mandate to develop and promote the HSR project and is the project delivery vehicle responsible for the technical and commercial aspects of the project.

On cost of the project, Mohd Nur Ismal acknowledged that both the Malaysian and Singaporean governments were still discussing the "common grounds, the approach to tendering".

"This will determine if it is a government design-and-build contract or if certain parts are being done in other manners. So it's still not decided," he added.

The Edge Financial Daily had reported that a presentation by China Railway in December last year had pegged the project's price tag at RM70 billion, up from RM65 billion a few months ago, which was up from RM40 billion in May.

The Singapore-KL HSR, first announced by Singapore's Prime Minister Lee Hsien Loong and Malaysia's Prime Minister Najib Razak in 2013, will allow commuters to travel from Singapore to KL, or vice versa, in about 90 minutes.