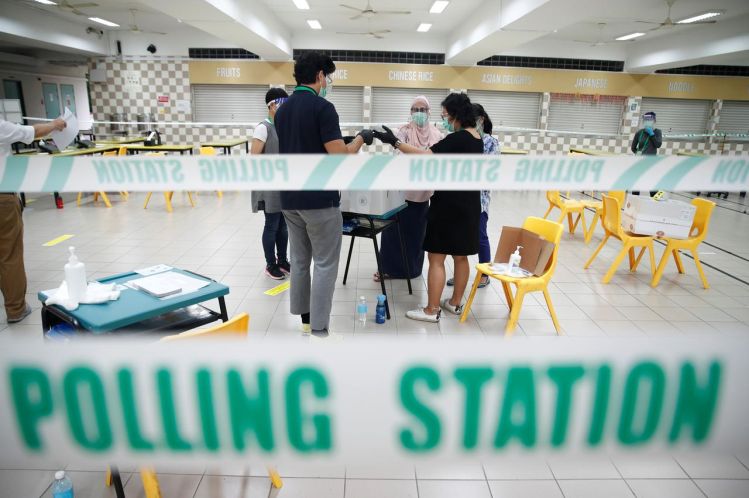 SINGAPORE (July 11): Early indications are that the People's Action Party (PAP) is en route to retaining power by winning 83 of the 93 Parliamentary seats up for grabs in Friday's Singapore general election.

The Workers' Party (WP) is expected to win 10 seats.

These early results, as of 1am Saturday, are based on a sample count at the start of the counting process. The margin of error is four percent.

“As this is a sample count, the election result could be different. Counting is still in progress,” said the republic’s Elections Department in releasing the sample count.

The department said the public should wait for the announcement of the election result by the Returning Officer, Tan Meng Dui, which will be broadcast live on television.

This 18th General Election for Singapore and the 13th since its independence in 1965 was held in the “new normal” with safe-distancing regulations and restrictions amidst the prevailing COVID-19 situation.

A solo independent candidate and 11 political parties, including the PAP, competed for 17 group representation constituencies (GRCs) and 14 single member constituencies (SMCs) to fill the 93 Parliamentary seats.

This is the second consecutive General Election in which the PAP has fielded candidates in all 31 electoral divisions.

A total of 2.6 million electors were eligible to vote in this election. As of 8pm, 2.56 million or 96 percent of registered voters had cast their votes, according to the Elections Department.

The department said the turnout was higher than that of the 2015 General Election, which saw votes cast by 2.3 million voters or 93.56 percent of the registered voters.

It had earlier announced an extension of polling hours until 10 pm because there were still a  number of polling stations with long queues, attributed to the COVID-19 precautionary measures put in place to ensure a safe General Election.