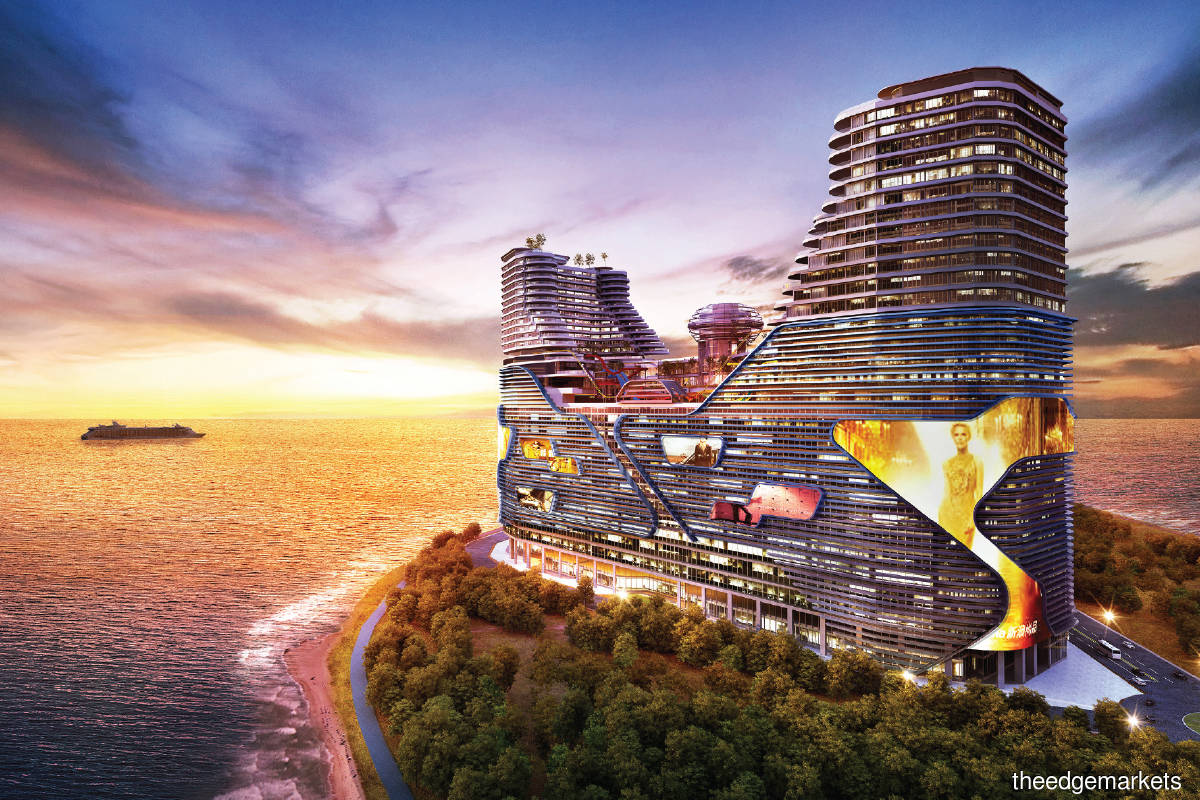 Harbour City is a six-acre marine-themed development on the reclaimed island of Pulau Melaka, fronting the Straits of Melaka

Under the agreement signed last week, Tayrona Capital will invest US$23 million (RM96.5 million) in Hatten Land’s unit Gold Mart Sdn Bhd, which is developing Harbour City, through the issuance of new shares, according Tayrona Capital a 99% stake in the company.

In addition, Tayrona Capital will pay US$240 million to another company, Wealth Express Holdings Group (WEH), to complete the development and marketing of Harbour City. WEH is not related to Hatten Land’s directors and controlling shareholders.

Harbour City is arguably the most ambitious of a series of projects by Hatten Land, which is owned by property developers from Singapore who have made Melaka their hunting ground since 2006. The company is listed on the Catalist board of the Singapore Exchange (SGX) and has business operations in Negeri Sembilan, Selangor, Singapore,  Australia and China, according to its annual report.

Spanning six acres, Harbour City is a marine-themed development on the reclaimed island of Pulau Melaka, fronting the Straits of Melaka. It comprises a water theme park,  touted to be the largest in Melaka when completed,  as well as a mall and three hotel blocks.

The highly anticipated project was launched in 2015 and slated to be completed in the second quarter of 2020. Construction of the project has screeched to a halt, however, owing to a dispute with its main contractor, says Hatten Land in an email response to The Edge.

In a recent filing with SGX, Hatten Land disclosed that China Construction Yangtze River (M) Sdn Bhd, the main contractor of Harbour City, was claiming RM100 million from Gold Mart, which is still waiting for the appointment of an adjudicator by the director of Asian International Arbitration Centre.

So far, about 70% of the project has been completed. Hatten Land said a substantial amount of capital was still required to complete the project and this would impose significant cash flow pressure on the group in view of the challenging business environment resulting from the Covid-19 pandemic.

However, the new targeted date of completion has yet to be disclosed.

Firm gets reprieve from Covid-19 fallout

The proceeds of US$60 million will give cash-strapped Hatten Land a much-needed fund infusion. As at end-March 2020, the group’s cash balance stood at RM20.83 million, while borrowings totalled RM408.2 million.

SGX filings show the group sank deeper into the red with net loss widening to RM32.3 million for the three months to March 31, 2020 (3QFY2020) from RM1.54 million in the same period the year before, while revenue declined 92.4% year on year to RM7.24 million, which the group attributed to a spike in expenses and poor sales because of the pandemic.

“Barring any unforeseen circumstances, the group is expected to record a loss for 4QFY2020 and the financial year ending June 30, 2020,” it warned in its June 15 filing.

The group’s next most sizeable project is an upcoming 25.55-acre development worth RM3 billion in Cyberjaya, Selangor, which would be its maiden venture into medical tourism.

Hatten Land also holds the right of first refusal and call options to 200 acres in Melaka, 20 acres of which the group has used for the development of integrated and mixed-use projects. They are Hatten City Phase 2, a mixed-use development comprising Imperio Mall and Imperio Residences; Hatten City Phase 1, an integrated development of Elements Mall, SilverScape Residences, Hatten Place and a tower managed by Hilton Worldwide as part of its DoubleTree brand; Vedro by the River, a retail mall located along the Melaka River; and Satori, a two-acre mixed-use development comprising lifestyle facilities, a hotel, serviced residences and a mall, where construction is underway.

While the group has stocked up on land assets at various locations in the country, Hatten Land’s financials have been revealing of the difficulties it has been facing.

According to news reports, debts of Hatten Land’s two subsidiaries amounting to a combined RM605 million to scheme creditors had necessitated the group’s filing for a restraining order from the High Court in Melaka, which was granted on July 7.

The court-ordered moratorium protection, which commenced on July 10 for a period of three months, grants the company protection from legal proceedings as it pursues a strategic restructuring exercise for the subsidiaries, MDSA Ventures Sdn Bhd and MDSA Resources Sdn Bhd.

In its filing, Hatten Land said the bulk of these debts would be erased, as they were “owed to group entities, while the exercise will also see both subsidiaries restructure their legacy contractual obligations to achieve a more sustainable capital structure”.

“Covid-19 has had a wide impact on communities and the global economy, which has forced many businesses to suspend their operations and re-evaluate their business models. The impact has been particularly distinct for the group,” Hatten Land executive chairman and managing director Datuk Colin Tan June Teng tells The Edge.

“We will be announcing strategic initiatives and restructuring to reset our cost structure and fortify our business resilience through measured and purposeful steps. As a result, we will be better positioned for growth when consumer demand recovers as the economy normalises.”

So far, Hatten Land has implemented initiatives such as salary adjustments and reduction of non-essential expenses to conserve its financial resources.

Is Melaka ready for a new mega project at this time?

Even with the completion of Harbour City, it may face the challenge of drawing in visitors. As with most large-scale developments in second-tier cities, property experts The Edge spoke to expressed concern over the viability of the sizeable Harbour City project in sleepy Melaka. They believe its local catchment of below one million would not justify the amount being invested in the project.

They cited Yong Tai Bhd’s tourism-themed Impression City Melaka as an example. The developer has had difficulty achieving its targeted sales despite running twice-daily shows at Encore Melaka, a performing arts theatre, since opening in July 2018.

According to news reports, live performances at the RM8 billion mixed-use development failed to achieve its projected RM140 million in ticket and merchandise sales as well as annual net profit of RM60 million.

“Melaka is not a gateway town. Its meagre population and economy are not enough to support an endeavour of this magnitude, not even with the weekend crowd from Singapore that frequents Melaka. There are better [locations] for a project like this,” says a property expert who declined to be named.

Tan dismissed the concerns, saying, “Hatten Land is not just a property developer but also a community developer. Thus, part of our commitment is to break new ground by developing innovative property concepts that add value to the communities.”

“We remain deeply rooted and vested in Malaysia and we stay optimistic of the long-term prospects in Malaysia despite the short-term challenges from the Covid-19 pandemic. We will continue to evaluate property development opportunities in Malaysia,” he says.

Shares in Hatten Land have fallen 40% over the past year, closing at six Singapore cents last Thursday, giving it a market capitalisation of S$86.82 million (RM265.3 million).