Sina, Youku name AirAsia the most influential airline in China 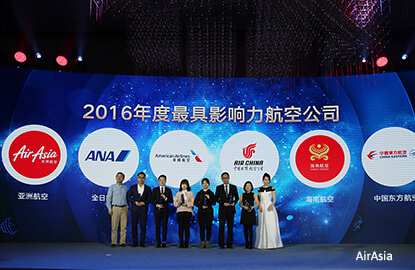 KUALA LUMPUR (Jan 9): AirAsia Bhd said it was named the most influential airline in China at the 2016 New Power of Travel Awards held in Beijing last Friday.

Hosted by Sina Travel and Youku Travel websites, the awards review the travel industry's development and trends in China, and evaluate travel-related companies and products based on the content and readership by more than 800 million users on both the websites.

Sina is the world's largest Chinese-language web portal, while Youku is one of China's top video and online streaming platforms. The awards honour outstanding companies and products as voted by users.

AirAsia said the awards committee noted that the budget carrier had influenced free and independent travellers in China with its young, passionate and creative brand image since entering the market, adding that AirAsia has also created lots of unique content and activities on social media, thus the concept of 'Now Everyone Can Fly' has now become more influential in China.

"We would like dedicate this award to our 1.3 million Sina Weibo followers and 300 million guests," said AirAsia's North Asia president Kathleen Tan in a statement today.

"China is very important to AirAsia. It is an incredibly dynamic market and we have focused our efforts on pushing out the very best content on Chinese social media in order to deliver an even better travel experience to our fans in China.

"This includes information on where to find the best food, hidden gems and great travel destinations where amazing memories can be made," said Tan.

She added that AirAsia believes it has the power to open up new markets, not just as an airline but as a travel partner "that inspires wanderlust, discovery and a new lifestyle".

At 2.41pm, shares in AirAsia were trading at RM2.18, giving it a market capitalisation of RM6.09 billion.