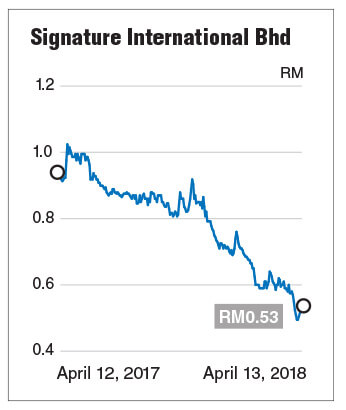 KUALA LUMPUR: Between the years 2013 and 2015, kitchen cabinet and wardrobe maker Signature International Bhd’s share price about tripled to a peak of RM1.56 in July 2015. But just as quickly as it rose, the stock then tumbled and hit an over four-year low of 49 sen earlier this month, before paring some losses to settle at 53 sen last Friday.

The last time it was trading at around this level was in October 2013. Signature’s co-founder and managing director (MD) Tan Kee Choong was baffled by how low the company’s share price has fallen. “I really don’t know why. It does not reflect what we’re doing,” Tan lamented when met recently. At the current price, which is down about 43% from a year earlier, the stock is now trading at a P/E ratio of 6.3.

Signature’s prospects have been seen as tied closely to property developers as some 75% of its sales come from projects it secures from them. “If it’s overreaction to the slow property market, this one is a very long-winded overreaction,” Tan told The Edge Financial Daily. Tan also thinks the public do not understand Signature’s business.

“They compare our business to other fast-moving consumer products, where they expect the revenue or profit to be steady and consistent. Our business depends on projects and their timing. No doubt we’re down now [with the slow property market]; that’s our challenge and we have to look at how to mitigate that and improve our retail business. Also, last time our projects order book grew because we couldn’t recognise [revenue] yet as the project sites not ready, as new ones came in. That gave the impression we’re flourishing. But when projects kick off as we recognise revenue, the order book will be reduced. But that doesn’t mean we have no prospects. We still have our retail.

“Should I be worried about getting new projects? I think the developers should worry first. If they don’t launch, they have nothing to sell. So if they continue to have business, so will we,” Tan said. Tan also highlighted that the group’s latest quarterly results were to expectations, yet that did not boost the share price.

Signature’s net profit grew 19% year-on-year (y-o-y) in its second quarter ended Dec 31, 2017 (2QFY18) to RM3.99 million from RM3.36 million, mainly due to higher margin from its project segment, as revenue jumped 36% y-o-y to RM55.45 million with higher project revenue. While its cumulative six-month net profit was still down 13% y-o-y to RM5.82 million, despite revenue picking up 29% to RM107.71 million, Tan said the group’s financial performance “should be good” for its FY18 ending June 30 “simply because our project side has been progressing”. The group’s order book currently stands at about RM150 million, comprising “100 something to 200” projects. It is bidding for some RM400 million more.

Following the release of the results in February, CIMB Investment Bank Bhd’s Nigel Foo upgraded Signature from “hold” to “add”, saying that the stock, which was trading at 61 sen then, was at a huge 62% discount to its sum-of-parts per share valuation of RM1.57, and “too cheap to ignore”. Foo also highlighted that Signature’s 2QFY18 showed margin recovery, with ebitda margin at 12.4%, versus 7.8% in 1QFY18. But that still didn’t arrest the decline in Signature’s shares.

Did the exit of the Employees Provident Fund from its substantial shareholders’ list in January further fuel the slump? It emerged on the list in October last year with a 5.07% stake after topping up with 82,300 shares. “They came in at above 5% [shareholding]. But when they came in like that, people wrote about them. So maybe they don’t want to appear on the radar [anymore]. They’re still with us, but with [a shareholding of] just slightly less than 5%,” Tan said.

Tan, meanwhile, has been upping his own stake in the company, from 26.08% as at Sept 29, 2017, to 28.16% as at March 26 this year. “Why not? Our share price is very undervalued and we have long-term plans and a lot of strategies. I think [the group] has very good potential,” Tan said when asked about that. Similarly, Datuk Chooi Yoey Sun, the other Signature co-founder, has also raised his stake to 28% from 25.93%.

Since the start of the property market slowdown, Signature has been revving up its focus on expanding both its overseas footprint and retail business. It undertakes the latter via its flagship brand Signature Kitchen, and its no-frills one, Kubiq.

One retail strategy that has been “very well received” is the sale of cash vouchers for kitchen cabinetry to developers, to be redeemed by home buyers. The cash vouchers create a “three-party-win situation”, said Signature’s retail division director Lau Kock Sang. “Developer can use it as promotional incentives for buyers and they (the developers) only pay when they get confirmed sales. For home buyers, they get free kitchens. For us, we get extra retail revenue,” he said.

Started in 2015, the cash vouchers scheme has secured letters of award (LoAs) for about RM50 million worth of kitchen cabinetry from some 30 projects — of which about 90% are yet to be realised. Revenue realisation is slow because it will depend on completion of project, sale, and handover of units to home buyers. “It’s the opposite of our project business — where the awards are slow but realisation [of revenue] can be fast,” Tan said.

The RM50 million will be disbursed among Signature’s retail outlets, said Tan, because the customers will need to be served. “It’s also good incentive for us to recruit new dealers, with these ready sales. We have 23 now and we want 30. That’s the first stage of our retail expansion — expanding the dealer network,” added Tan, who is expecting more developers to come on board this cash voucher scheme.

Kubiq warming up with PR1MA boost

As for Kubiq, the brand got a shot in the arm recently in the form of a letter of engagement (LoE) from Perbadanan PR1MA Malaysia to offer kitchen packages to new homeowners under the 1Malaysia People’s Housing (PR1MA) programme.

“Under the LoE, whoever signs up for a PR1MA home will be diverted to us. We have a ready floor plan so we have the advantage. PR1MA has done two road shows and we’ve attended both. Lead-wise, it’s been very encouraging. We’ve concluded a few sales already,” said Lau. But it’s too soon to talk targets, said Lau. “PR1MA just started promoting aggressively. So let’s see,” he said. Under Kubiq, Signature is also working with Bank Rakyat to offer loan facilities to their cooperative members for kitchen and wardrobe purchases. “So we’ll leverage on that too,” Tan added.

The group is also now in the midst of developing an online market-place platform for Kubiq. “It’s something like Lazada, but B-2-B (business-to-business), and only for kitchen and kitchen-related products. We will start with kitchen cabinets first,” said Tan. The platform is seen as one that will improve efficiency for the group where Kubiq dealers can effortlessly place orders.

On the group’s overseas push, Tan said Signature “is moving towards closing the deal” in its bid for the kitchen and wardrobe contract for the third phase of the Battersea power station redevelopment project in London. The contract is estimated to be worth about RM50 million.

Tan’s team went to London again as recently as last month to meet with the new main contractor for the project. “I think our chances are there — we’ve been to see them many times. If they want to kick us off the project, they wouldn’t still be calling us,” said Tan.

The group has also identified local players to work with as it expands its presence regionally in Vietnam, Indonesia and Thailand, and are jointly bidding for jobs worth over RM20 million. “It’s very challenging [to push overseas] as people don’t know us. We need a bit of time. I reckon two years is reasonable. By 2019, we should expect some orders to come in,” said Tan. Overseas contribution to the group’s revenue now stands at less than 5%, he said.

Meanwhile, Tan said Signature has not been affected — yet — by the government’s freeze on property projects with per unit priced above RM1 million. “Developers are still developing because the projects they have in the pipeline are those already approved. They can always build smaller units to meet the cap. I’m not worried now because we have a few hundred projects to work on, while we’re aggressively expanding our retail and overseas businesses. Whatever we do now is to mitigate [any impact] years later.”

As for its 38.9-acre Bandar Baru Enstek land that has been put up for sale, Tan said the group hopes to sell it at RM55 per sq ft. It was bought in 2015 at RM50.8 million or RM30 per sq ft. “But there’s the real property gains tax to consider, so I think we have to wait. We’re in no rush to sell.”