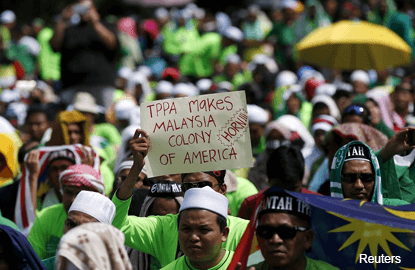 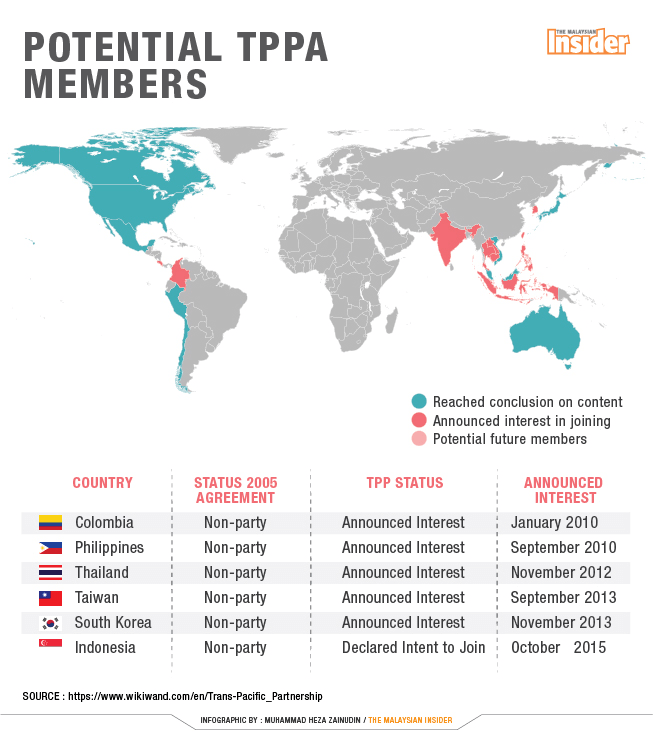 KUALA LUMPUR (Jan 26): How Malaysia does business and makes public policy will be decided today as federal lawmakers debate on whether Putrajaya should sign on to what experts have called the largest trade pact in history.

More than any other past trade agreements, the Trans-Pacific Partnership Agreement (TPPA) has sparked debate and opposition in almost all its 12 member countries.

Some of the fiercest has been in the United States – the deal’s main sponsor – where even President Barack Obama’s own party members have rebelled and promised to defeat it.

This is because the TPPA forces its members to conform to a uniform standard in areas such as business operations, worker relations, environmental protection and intellectual property rights. To do this, countries will have to change existing laws and procedures in a process called ratification.

Although Putrajaya does not need parliamentary approval to sign it, International Trade and Industry Minister Datuk Seri Mustapa Mohamed has said Putrajaya would only do so if it got the nod from the majority of lawmakers.

This appears likely, given that the ruling Barisan Nasional has more than enough MPs to push it through despite opposition from PKR, Parti Amanah Negara (Amanah), DAP and some PAS legislators.

These are the main points made today and tomorrow on what is at stake if Malaysia signs on to the TPPA at a ceremony in New Zealand next month. However, the trade pact will only come into effect in 2018 – two years after it is ratified.

The TPPA will liberalise all markets in 12 member countries and allow corporations to set up shop in any country.

TPPA advocates, such as Mustapa, have said trade barriers to four new markets would be removed for Malaysian companies – the United States, Canada, Mexico and Peru.

The ministry’s cost-benefit analysis shows that an additional US$136 billion to US$239 billion in foreign investment could flow into the country over a period of 10 years after 2018.

The country will also gain an extra 0.6% to 1.15% in economic output by 2017, said the report by PricewaterhouseCoopers.

The PwC report also said export-oriented firms would benefit while those concentrating on the domestic market faced increased competition from foreign firms.

Government protections for Bumiputera companies have largely been preserved, said the PwC report.

Member countries will have to change 26 existing laws, said Pantai Dalam MP Nurul Izzah Anwar, if they signed on to the TPPA and among them were ones related to labour issues.

Supporters said workers will be better protected as TPPA makes it easier for unions to be set up and recognised, allowing foreign workers to join unions and even take up official posts.

Limitations on what can be negotiated in collective bargaining sessions will be removed, making it easier for disgruntled workers to go on strike.

One of the TPPA’s most contentious aspects is it allows foreign companies to sue a government if the latter’s decisions affect the firm’s investments in the country.

Critics, such as Klang MP Charles Santiago, said it would cripple Putrajaya’s ability to pass laws and make policy. The PwC report said these laws have to follow terms in the TPPA’s investment chapter.

But the PwC report also said there were safeguards to allow governments to make laws on public health, safety and the environment, and to prevent “nuisance suits”.

Universiti Malaya law professor Gurdial S. Nijar countered by saying that recent ISDS cases show that such safeguards, which were also in other existing trade agreements, have not stopped governments from being sued.

The PwC report said Putrajaya would have to set money aside to deal with potential ISDS cases.

Supporters said the prices of medicines, software and textbooks would not go up due to stronger protections on intellectual property rights.

Santiago and patient groups, however, said medicines would remain costly and stay so for a longer time. This is since those patent protections make it harder for cheaper, generic alternatives to come into the market.

A type of new medicine called biologics, said Santiago, some of which were necessary to treat cancer, were not protected. Theoretically, cheaper generics for them can be created. This ability will disappear post-TPPA as the pact imposes market protections for biologics.

Another study by the Global Development and Environment (GDAE) Institute has challenged the ministry’s projections on benefits to wages and job creation.

A total of 771,000 jobs would be lost mostly in the US, said GDAE. Developing countries, such as Malaysia, would also see job losses and wage squeeze.

Professor Jomo Kwame Sundaram, who co-authored the study, said it would also cause greater inequality as industries would strive to make cheaper exports in order to compete.

Second, businesses in participating countries will strive to become more competitive by cutting labour costs. This will have a negative effect on income distribution and weaken domestic demand.