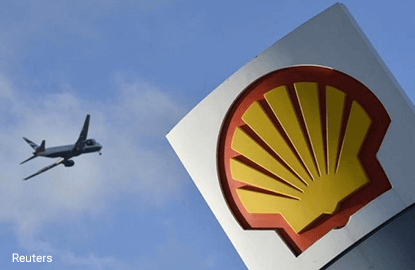 (Feb 21): The giant tankers anchored along the Scottish coast in the Firth of Forth weren’t going anywhere. They were just providing floating storage because there was no demand for their cargo, North Sea crude oil.

But the flickering computer screens in the world’s trading rooms told a different story. Prices through the month of April were jumping, showing someone was buying, stunning traders and leaving some with heavy losses. That wasn’t the only bizarre gyration last year in the market for Brent, whose price determines the cost of just about every petroleum-based product, from jet fuel to plastic spoons. Such unusual moves damaged confidence so much that some traders retreated from the market.

The buyer on virtually all those occasions was Royal Dutch Shell Plc, according to interviews with two dozen industry executives and data compiled by Bloomberg. Last year, Shell dominated Brent trading to such an extent that it moved the market even against the fundamentals of global supply and demand, according to the interviews with the market participants, who asked not to be named describing the activities of a rival. Shell said in a statement there was no basis for competitors to criticize its behaviour.

Better known for its oil fields and refineries, Shell is also the world’s largest oil trader, handling contracts that exceed the needs of its core business and enabling it to make speculative bets in dozens of markets. With Wall Street-like operations from London to Singapore, Shell trades over 12 million barrels per day of physical crude and refined products — more than a 10th of the world’s oil consumption — and "several multiples of that as derivatives," according to a Shell presentation.

While none of those interviewed said Shell did anything illegal, they said the company violated the unspoken rules governing the market, which is lightly regulated. Executives of several trading rivals, including Vitol Group BV, the world’s top independent oil merchant, raised objections with counterparts at Shell last year, according to market participants.

The strife centres on one of the most important, albeit arcane, corners of the oil market: the complex layers of physical, forward and financial contracts for North Sea oil that make up what outsiders refer to simply as Brent. Although North Sea oil output has been declining for more than a decade — falling to 2.8 million barrels a day, down from nearly 6 million barrels a day in 2004 — Brent is still the world’s most important industry reference.

The benchmark is a mix of four varieties of crude — Brent itself, Forties, Oseberg and Ekofisk, together known by their initials: BFOE. Of the four, Forties is the most important because it has the largest output. Shell built significant positions in Forties crude through last year, at times accumulating the majority of the crude available in any given month, both buying from third parties and retaining its own production, according to data compiled by Bloomberg.

The Anglo-Dutch giant made its highest profile move in April, when it secured at least 16 cargoes — each of about 600,000 barrels, or the standard size of a North Sea tanker — of Forties, equivalent to nearly 70% of the total cargoes available, according to data compiled by Bloomberg. That position gave it a strong influence in the daily price of the BFOE basket and, by extension, of the Brent universe of physical and financial contracts.

As Shell bought the crude, rivals scrambled to cover their own positions. Despite a glut in the global oil market, the price of Brent rose in April as if there were a shortage.

The difference between the June and July contracts — the most traded at the time — exploded from minus 70 cents to plus 99 cents — a huge swing in just four weeks . The 170-cent per barrel turnaround was striking in a market where typical fluctuations are five cents to 10 cents. In other niches of the Brent market, including the so-called contracts for difference, which allow physical traders to hedge risk, there were also large price swings.

The premium the market was demanding for immediate delivery was at odds with what traders could see: dotting the Scottish waters off Edinburgh were tankers at anchor. While Brent contracts briefly flashed a shortage, other international benchmarks, including West Texas Intermediate and Dubai, remained unaffected, signalling global oversupply.

As soon as the June contract expired, the market returned to normal: the shortage had been a mirage — oil was plentiful.

While largely unknown outside the industry, physical oil trading is a multibillion-dollar business that can make money regardless of whether prices rise or fall. For major energy companies such as BP Plc, Total SA and Shell, trading profits provided a cushion the past two years as crude prices declined to the lowest in 12 years.

At Shell, a new generation of oil traders dealing with Brent — led by Tarek al Hassan and Yuan Dong — adopted a more aggressive strategy, according to people familiar with the matter and rival traders. The shift highlights how Shell embraced risk-taking during the past five years under Mike Conway — the departing head of its trading business — and Mike Muller, in charge of oil trading. Previously, Shell was seen by rivals as a timid trader, unlikely to take big positions. Shell said its statement spoke on behalf of all its employees.

Shell built large positions in Forties at least two more times in 2016, after April, although the impact in the market was smaller, according to data compiled by Bloomberg.

In the aftermath of the April trades, some big oil traders — including Trafigura Group — reduced their exposure to some North Sea markets to avoid being wrong-footed, according to people familiar with the matter. Trafigura declined to comment.

While rivals complained to Shell, the oil giant saw its trading patterns as business-as-usual. It was simply securing enough Forties crude to supply its own refineries and clients in Asia, according to people familiar with the company’s strategy. Shell sold in Asia more than 35 million barrels of North Sea crude last year — up from around six million barrels in 2015 — according to ship-tracking and fixture data compiled by Bloomberg.

The saga reflects complaints over the Brent benchmark itself: dwindling North Sea output has reduced the amount of BFOE cargoes available, making the contract more vulnerable to traders building up big positions. S&P Global Platts, the pricing agency that oversees the Brent physical market, said on Monday it will add a new stream — Norwegian Troll crude — in January 2018, increasing the volume of the current BFOE basket by about 20%. The industry is discussing adding more streams in the future, even from as far away as Africa.

"The benchmark needs to continue to evolve,” said David Peniket, the president of the ICE Futures Europe exchange where Brent trades.