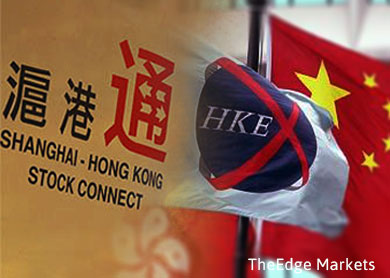 (Nov 19): Heard the one about the train leaving the station before it even arrived at the platform?

The morning after the much vaunted Shanghai-Hong Kong Stock Connect Through Train trading which allows global investors access to Shanghai’s A-Shares market and mainland China investors access to Hong Kong market, there are still more jokes than there are stories of investors piling on even as early enthusiasm fades. But no mistake, the experiment has been a huge success so far.

To be sure, the trading has been one-sided so far drawing greater participation from global investors who want access to Shanghai shares that appear grossly undervalued in current global context  than smart mainland investors, particularly Chinese insurance companies sitting on huge piles of cash, who are still staying away from Hong Kong stocks which appear fairly valued.

The demand for mainland China A-shares was such that global investors buying Chinese stocks reached the daily cap of 13 billion yuan (US $2.1 billion) by roughly 2 p.m., according to the Hong Kong Stock Exchange on Monday 17th November, the opening day.

Yesterday, the second day of the Stock Connect Through Train saw 2.68 billion yuan poured into Shanghai from Hong Kong in the morning trading session, accounting for 21 per cent of the 13 billion yuan daily quota for northbound investment.

In contrast, 82 per cent of the quota had been used up in Monday’s morning trade. That is more or less in line with the huge enthusiasm for northbound China investments and lukewarm response to southbound Hong Kong investments yesterday. Only 1.8 billion renminbi of the southbound quota, equivalent to 17% of daily limit, was taken up on Monday.

Part of Beijing’s policy of opening up its capital accounts and very gradually internationalising the renminbi, the stock connect scheme is seen as an important step in China's plan to gradually open its capital markets.

The first day of trading went smoothly with no serious technical glitches. Global investors on the northbound train loaded up on undervalued blue-chips including at assembler and distributor SAIC Motor, alcoholic beverage maker Kweichow Moutai and Daqin Railway.

Why the big rush on northbound train while southbound coaches still look fairly sparse? “We think northbound flows will likely be more active, thanks to pent-up northbound demand from investors already active in the A-share market,” says UBS Investment Research in a note.

Moreover, since “many Chinese high net worth individual investors may already own significant offshore holdings” including Hong Kong shares, there is slightly less enthusiasm to get aboard the southbound trains right now, UBS analysts say.

During the first two days, unfortunately, it’s been the case of buy on rumours, sell on facts. So, all three and other Hong Kong listed stocks that were supposed to benefit from the stock connect scheme’s southbound buying spree were actually down.

Indeed, a Citigroup report argues that investors who have been dumping HK Exchange shares because southbound trading has been less than spectacular may actually be making a mistake.

Hong Kong remains China’s international financial centre and its financial window to the world. Hong Kong Exchange & Clearing will be a huge beneficiary of China’s capital account liberalisation and this week’s launch of the Stock Connect through train is merely the first train or a starting point of a multi-year reform.

Citigroup sees increasing integration and capital flows between the financial markets of Hong Kong and China over time. Stock Connect would evolve through expanding the quota of the Stock Connect, widening product coverage from single stocks to derivatives and commodities, lowering the hurdles for participating retail investors from mainland China and linking Shenzhen Stock Exchange with Hong Kong Exchange  among other things, it notes.

Shanghai and Hong Kong stocks are taking a breather after the initial surge. Hong Kong shares have rallied nearly 15% since the Stock Connect scheme was announced in April, while Shanghai shares have risen by 25% over that period.

The Stock Connect through train was never expected to be high speed rail but if the first two days of trading are anything to go by, it is chugging along nicely. Investors still have plenty of time to hop on board and enjoy the ride.