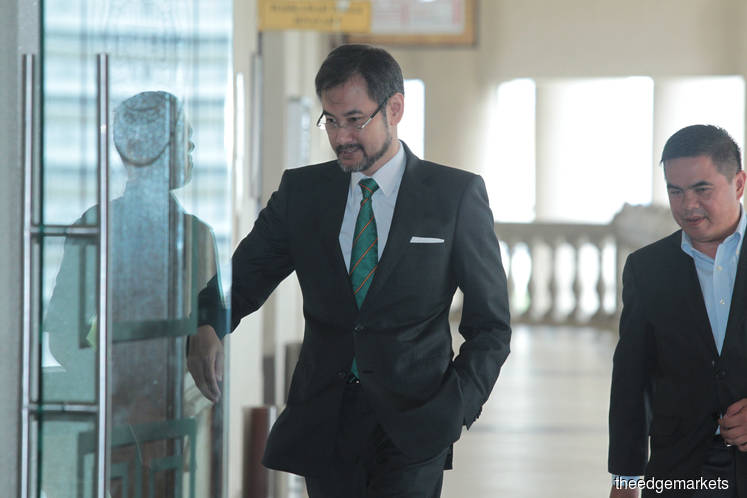 KUALA LUMPUR (Sept 25): Former prime minister Datuk Seri Najib Razak did not explain why the joint venture (JV) agreement between 1Malaysia Development Bhd (1MDB) and PetroSaudi International (PSI), which was to be signed by himself and King Abdullah of Saudi Arabia, did not materialise, according to former 1MDB chief executive officer Datuk Shahrol Azral Ibrahim Halmi.

Senior deputy public prosecutor Datuk Seri Gopal Sri Ram asked the witness to confirm that the JV was to be done by the two governments, to which he said yes.

"Did that happen?" asked the senior DPP.

"Did the accused during the period between the meetings on Sept 18 and 26 called you and asked you, being the managing director of the board, to verify the bona fide of this PetroSaudi company?" said Sri Ram.

Shahrol said he had signed the agreement, given that was a directive from Najib, and believed that it was for the purpose of national interests.

The former premier had earlier urged 1MDB's board of directors to expedite its decision on the JV.

The witness recalled a special 1MDB board meeting on Sept 26, 2009, attended by the directors of the company, as well as Tang, who is the executive director of business development, and Jho Low, during which the fugitive businessman passed his phone to then-1MDB chairman Tan Sri Bakke Salleh.

"Tan Sri Bakke covered a part of Jho Low's phone with his hand and whispered 'PM' to us. I understood that it meant that Datuk Seri Najib wanted to speak to him. I saw Tan Sri Bakke getting up to answer the phone in the meeting room," said the witness.

Following the phone call, Bakke informed the board that the joint venture with PSI was at the highest level between Malaysia and Saudi Arabia, with Najib asking for the decision on the JV to be made urgently, ahead of a visit by the Saudi royal family.

The agreement was supposed to be inked by both parties during the visit scheduled on Sept 28, 2009, said Shahrol.

He added that the phone call from Najib to Bakke was because the latter, along with 1MDB director Tan Sri Azlan Mohd Zainol, seemed not convinced of the investment, following the presentation of the papers related to the JV with PSI.

"They were not convinced of whether the investment was really to be done with a company owned by the government of Saudi Arabia. They also questioned the 60:40 JV breakdown, whereby 60% of the JV were accounted for by PSI's oil assets.

Najib is facing 25 charges of abuse of power and money-laundering in relation to billions of ringgit in funds allegedly sourced from 1MDB.

See also:
Najib paid himself RM216,000 per year to sit on 1MDB's board of advisers
Shahrol: 1MDB was not audited by National Audit Department as evaluation a political risk to Najib