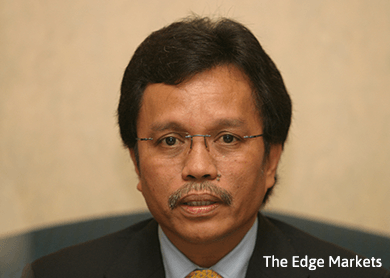 (Nov 27): Umno vice-president Datuk Seri Shafie Apdal has criticised the decision of party's Supreme Council to deny the deputy president the right to speak at the wing assemblies next month.

"With due respect to the decision of the Supreme Council recently, I am of the opinion that it is not appropriate to blatantly disregard tradition where the deputy president will speak when officiating the assemblies of the Youth, Wanita and Puteri wings,” he said in a statement today.

Party president Datuk Seri Najib Razak, who is also the prime minister, announced after the Umno Supreme Council meeting on Tuesday that the party would stop its practice of having its deputy president officiate the Youth, Wanita, and Puteri wing assemblies during annual general meeting next month, in order to create a "positive atmosphere".

The chiefs of the respective wings will officiate their meetings, Najib had said.

Umno deputy president Tan Sri Muhyiddin Yassin and Shafie were not present at the meeting on Tuesday when the decision was made.

Shafie also expressed disappointment in the party's lack of reform, which was first mooted by Najib himself.

He said Najib had previously called on Umno to reform, to make changes so the party continued to remain relevant but this had not come to pass with the recent move to stop him from speaking to members at the convention.

"But sadly, the reform process is not complete and did not happen, not only at the lowest level," he said.

"The Umno general assembly held once a year will usually gather all Umno grassroots members from all over the country.

"It is normal practice for them to hear the speeches, opinions and expectations not only from the party president, but also from the grassroots, including the deputy president, vice-presidents and also representatives."

Shafie also shared an anecdote of when he was younger and followed his father, Tun Sakaran, to his first Umno general assembly in the 1970s.

"Our ears feasted on informative speeches, although there were loud criticisms made but I could see that every Umno member present, including the top leadership accepting every word of the speeches and criticisms with an open heart.

"Every admonishment made is to make improvements, which is also the basis of the biggest party in the country. Umno, reaching 70 years old, should be more open and not exclusive to the interests of certain individuals.

"Umno is not owned by only one person but by 3 million members who have defended the party all this while," he added.

The Semporna MP said he was sure that Umno grassroots members would want to hear, scrutinise and evaluate everything presented by the leadership, including the deputy president, vice-presidents, wing leaders and the rest.

"But if this was the decision made by the wings' leaders who seem to be more knowledgeable and understand Umno's struggles more than leaders who are more experienced, then I respect the collective decision.

"But at least, can't the deputy president and vice-presidents speak during the wrap-up session?" he asked.

The move to bar the deputy president and vice-presidents from speaking comes amid discord in the ruling Malay party following the sacking of Muhyiddin and Shafie, both removed from Najib's Cabinet in July after being critical of his handling of his brainchild 1Malaysia Development Berhad (1MDB), which is mired in debt.

There had been speculation as to how the party would deal with allowing Muhyiddin, who, following tradition, would have given opening speeches at the wing assemblies.

He has remained vocal in criticising Najib even after being removed from the Cabinet. – The Malaysian Insider