Shafee accuses Shahrol of being in cahoots with Jho Low 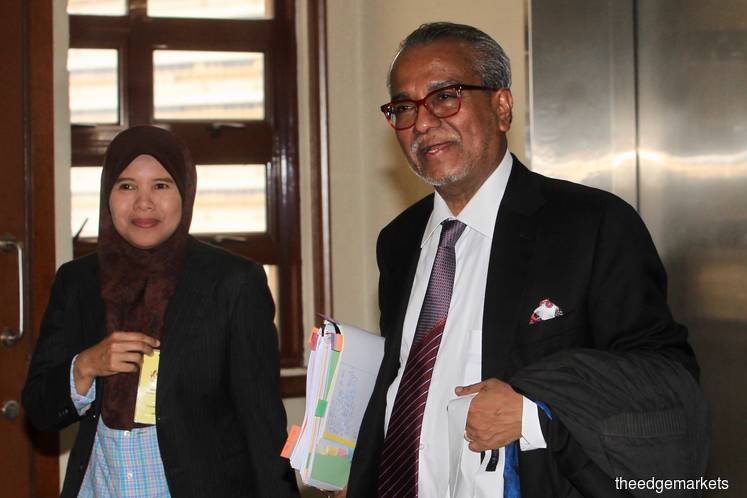 Throughout the cross-examination of the prosecution's ninth witness today, Shahrol claimed he was acting on instructions of Jho Low to restrict certain documents from being accessed by the NAD for the purposes of the audit.

Shahrol admitted, after being grilled by Shafee, saying had the NAD proceeded with the audit on 1MDB — then known as Terengganu Investment Authority (TIA) — the authority would have unearthed Jho Low's misappropriation of funds from the issuance of RM5 billion Islamic Medium Term Notes (IMTN).

1MDB had transferred US$700 million into Good Star Ltd, a company that was initially represented as belonging to 1MDB’s partner PetroSaudi International Ltd but was eventually revealed to belong to Jho Low.

After producing a series of documents today, Shafee implied Shahrol could not have been so naive to solely follow Jho Low to the point that he disregarded NAD’s requests for documents.

However, Shahrol defended his stand at the time, as he believed  Jho Low was only relaying instructions to him from former Prime Minister Datuk Seri Najib Razak, who was chairman of the board of advisors of 1MDB at the time.

Shafee retorted saying it should have been Shahrol's responsibility as the CEO of 1MDB to check with the shareholders, board of directors, and the board of advisors whether the orders indeed came from Najib.

The witness said Jho Low had told him that the NAD’s audit on 1MDB would pose a political risk to Najib, as the oppopsition was already playing up the RM5 billion IMTN issue at the time.

After TIA was acquired by the Minister of Finance Inc in 2009, Shahrol said he wrote a letter to the NAD stating that Najib did not consider the audit necessary and that Ernst and Young would be appointed as external auditors.

Shahrol signed the letter but contended that the contents were prepared by Jho Low.

“The letter stated that the takeover of the Terengganu Investment Authority to become 1MDB was done on an ‘as is where is’ basis, and because of that, it would not have to be audited or a due diligence conducted by the National Audit Department,” said Shahrol in his witness statement.

Shafee: I have shown by contemporaneous document, that the PM (Najib) was never the person who obstructed the due diligence and audit of 1MDB.

Shafee: I am putting it to you that the PM has no interest to obstruct the due diligence and the auditing of 1MDB.

Shafee: I am further putting it to you that the only interest that is visible is that of Jho Low — acting in tandem with some personnel in 1MDB — were the only people with the interest never wanting to do the auditing on 1MDB beyond July 1.

Shafee: The reason why they were so bent on not allowing the Auditor General to come in, was because it will unravel the cheating and misappropriating in the IMTN issuance.

Shafee: It would also unravel, among other things, the US$700 million payment to Good Star, which was Jho Low's company.

Shafee: In view of the crystal clear evidence, it will show that you could not be that naive in believing Jho Low all the time. There has to be a time that you felt that this was going into treacherous waters.

Shafee:  In this episode, as early as that, you were very much in cahoots with Jho Low. You were not blind, but your eyes were fully open.

The NAD eventually conducted an audit of 1MDB but only later in 2015, after much pressure from the opposition and civil society, following reports that RM2.6 billion had been deposited in Najib's personal bank accounts.

However, the report was classified under the Official Secrets Act. It was only declassified last year.

Following that, Tan Sri Dr Madinah Mohamad , who was the Auditor-General then, issued a statement confirming that the original audit report on 1MDB issued in 2016 has been altered, and that orders to tamper with the report first came from Najib.

Among alterations done prior to the audit report being presented to the Public Accounts Committee on March 4, 2016, was the removal of the mention of Jho Low's attendance at a 1MDB board meeting.