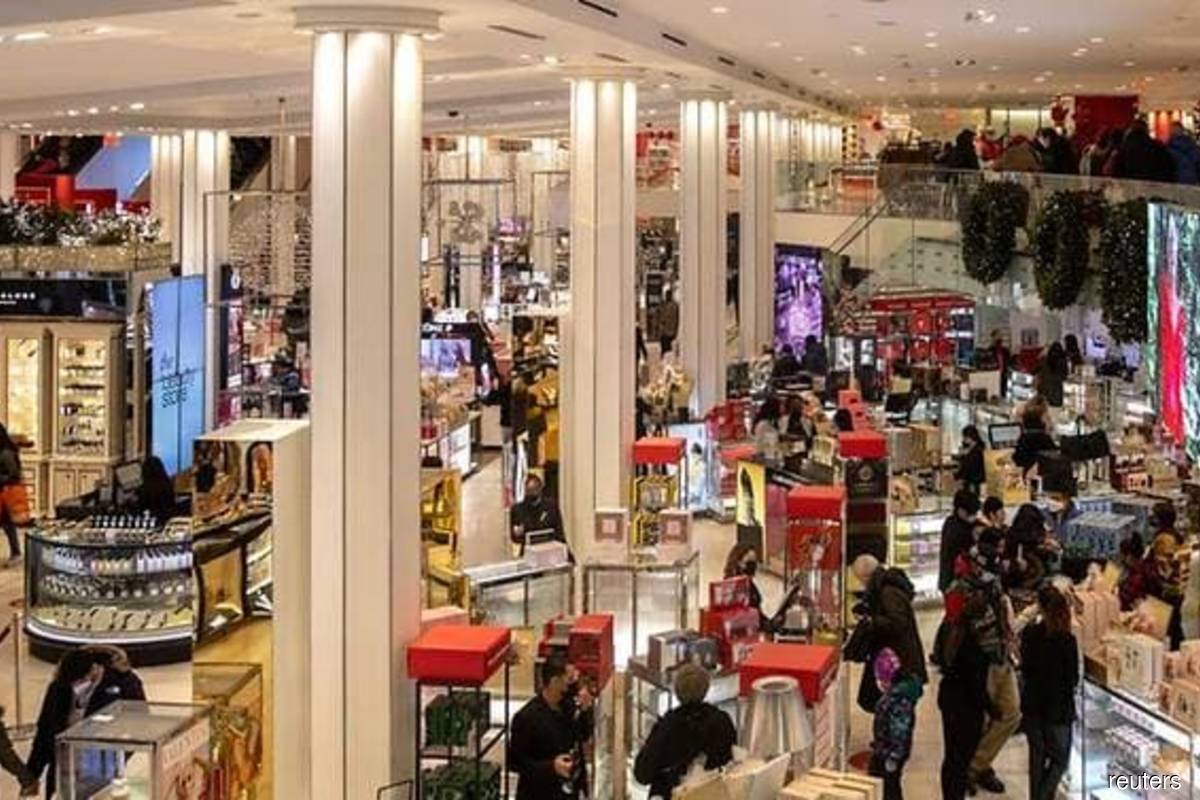 People wear protective masks while shopping at Macy's Herald Square in the Manhattan borough of New York City, New York, US on Dec 26, 2020, following the outbreak of the coronavirus (Covid-19) disease. (Photo by Jeenah Moon/Reuters filepix)

WASHINGTON (July 30): US consumer spending surged in June, as vaccinations against Covid-19 boosted demand for travel-related services, but part of the increase reflected higher prices, with annual inflation accelerating further above the Federal Reserve's 2% target.

Though personal income barely rose last month, other data on Friday showed wage growth in the second quarter was the fastest in 13 years on an annual basis. That, together with rising household wealth and ample savings should keep consumer spending strong, though rising Covid-19 infections pose a risk.

"The overall trend of healthy-to-strong growth will continue into next year," said Scott Hoyt, a senior economist at Moody's Analytics in West Chester, Pennsylvania. "Downside risks remain large. The return of shutdowns from increased infections is unlikely, but cannot be ruled out. There are also upside risks, especially given all the extra saving since the spring of 2020."

Consumer spending, which accounts for more than two-thirds of US economic activity, rebounded 1.0% last month after dipping 0.1% in May, the Commerce Department said. Economists polled by Reuters had forecast consumer spending rising 0.7%.

Nearly half of the population has been vaccinated against Covid-19, allowing Americans to travel, frequent restaurants, visit casinos and attend sporting events among services-related activities that were curbed early in the pandemic.

Spending on services advanced 1.2% last month. The broad increase was led by spending at restaurants and hotels.

While spending on goods remains strong, the pace has slowed amid shortages of motor vehicles and some household appliances, whose production has been hampered by tight supplies of semiconductors across the globe. Demand is also shifting to services from goods. Amazon.com Inc on Thursday said sales growth would slow in the next few quarters as customers venture more outside the home.

The data was included in the second-quarter gross domestic product report published on Thursday. Consumer spending grew at a robust 11.8% annualized rate last quarter, accounting for much of the economy's 6.5% growth pace, which lifted the level of GDP above its peak in the fourth quarter of 2019.

The personal consumption expenditures (PCE) price index, excluding the volatile food and energy components, rose 0.4% in June, after advancing 0.5% in May. The so-called core PCE price index was lifted by increases in prices of airline tickets, used cars, as well as hotel and motel accommodation.

"Price pressures are centred on areas that are having struggles during reopening. Some of those areas are simply reflating to pre-pandemic prices; others should see prices come down as they adjust capacity and work out supply chain issues," said Will Compernolle, senior economist at FHN Financial in New York. "Even with modest monthly increases in PCE prices for the next year, year-over-year readings will be high for a while."

Consumers are taking note of higher inflation, which is eroding sentiment.

Stocks on Wall Street were trading lower. The dollar rose against a basket of currencies. US Treasury yields fell.

The US central bank on Wednesday kept its overnight benchmark interest rate near zero and left its bond-buying programme unchanged.

Excluding inflation, consumer spending rebounded 0.5% in June, after dropping 0.6% in May. The bounce back in the so-called real consumer spending last month puts it on a higher growth trajectory heading into the third quarter.

Personal income gained 0.1% in June after dropping 2.2% in May, as transfers from the government declined. The saving rate fell to a still-high 9.4% from 10.3% in May, which should underpin spending as the flow of government money dries up.

In a separate report on Friday, the Labor Department said its Employment Cost Index, the broadest measure of labor costs, rose 0.7% last quarter, after gaining 0.9% in the January-March period. That raised the year-on-year rate of increase to 2.9%, the largest gain since the fourth quarter of 2018, from 2.6% in the first quarter.

The economy is facing a shortage of workers, with a record 9.2 million job openings at the end of May. About 9.5 million people are officially unemployed. Lack of affordable child care and fears of contracting the coronavirus have been blamed for keeping workers, mostly women, at home. There have also been pandemic-related retirements, as well as career changes.

Republicans and business groups have blamed enhanced unemployment benefits, including a US$300 weekly check from the federal government, for the labour crunch.

"We should be prepared for labour supply constraints that keep solid upward pressure on compensation costs in the second half of 2021," said Oren Klachkin, lead US economist at Oxford Economics in New York. "Better health conditions and reopenings will only gradually equalize the imbalance between strong labor demand and the limited supply of workers."