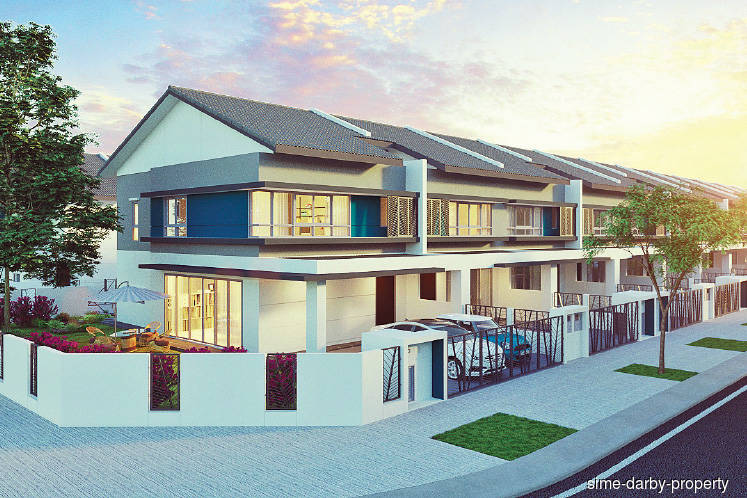 An artist’s impression of Serenia Arina “Following the success of our previous launches, we plan to launch two new phases of residential units with a GDV of RM440 million in 2020,” says general manager Mohd Idris Abdullah, who is head of Business Unit 2.

Serenia City has an area of 2,370 acres and has residential (13,234 units), commercial (1,206 units) and industrial (161 units) components. Formerly a tea plantation known as Ampar Tenang, SDP started developing the township in 2013 and it is expected to be fully completed by 2035. It has a total gross development value  of RM9.32 billion.

“For Serenia City, our sales target will be about RM300 milllion to RM380 million [for next year]. Typically, our market absorption [for this township] is about 500 units per year, but we are pushing the number up to 700 in 2020. We are confident we will continue to hit our targeted sales,” said Idris.

“We plan to attract owner occupiers, investors and first-time homebuyers for the upcoming phases. Our target market also consists of those who work in nearby catchments such as Putrajaya and Cyberjaya.”

Serenia City is 15km from Cyberjaya, 20km from Putrajaya, 31km from Puchong, 33km from Subang Jaya and 43km from Kuala Lumpur.

To ensure security, it has 24-hour auxiliary police patrols.

The developer had earlier launched a few phases of its industrial component Phase 1, Cipta Serenia, which covers 959 acres. Of this, 595 acres have been sold to Xiamen University, Horizon Village Outlet and Sunsuria Development. The remaining land has been developed into a light industrial area, Pusat Perindustrian Cipta Selatan and Rumah Selangorku.

Comprising detached factories and first launched in 2016, the subphases ( Cipta 1, Cipta 2 and Cipta 3) in Phase 1 have been fully sold while Cipta 3A is 73% taken up. The selling prices start at RM8.1million.

“Currently, there is a good demand for factories equipped with modern features and offices. We are banking on this demand by introducing our comprehensive, industrial units. Moreover, opportunities [for businesses] are abundant as the township offers excellent connectivity,” says Idris.

Serenia Adiva, which features 402 double-storey homes measuring 20ft by 75ft, was launched in two phases in October last year and March this year. The selling price for the first phase started at RM561,888, while the second phase was priced from RM596,888. Both phases have been fully sold.

Serenia Arina, meanwhile, was launched in two phases last month. Comprising 200 double-storey, 22ft by 75ft link homes, selling prices started at RM628,888 (first phase) and RM648,888 (second phase). The first phase has been sold out while the second phase has recorded an 80% take-up rate so far.

The homes are linked to jogging and cycling tracks, parks and amenities, such as neighbourhood shops, that are targeted to be completed in 2022.

Plans for the 665-acre Phase 3 include Rumah Selangorku, public amenities, neighbourhood parks and an adventure park.

The township is accessible via the North-South Expressway Central Link (ELITE), Maju Expressway and Salak Tinggi ERL station. The Bandar Serenia interchange to the ELITE was opened on Nov 26 last year.